Cosmetic surgery is often viewed as our interminable battle against aging. What seems to be different today in many places is that it’s acceptable to talk publicly about all those age-removing techniques.

Not so long ago, these things were kept a secret. Remember when people suddenly got young or bosomy and they told you they were just taking extra zinc? 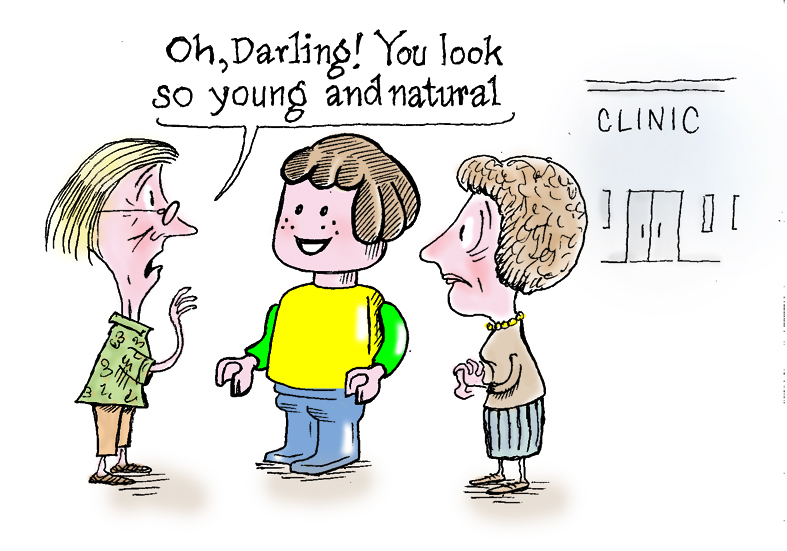 There is a great story about a handsome man who marries a beautiful woman and their children all turn out to be extremely unattractive, looking nothing like either parent. The father questions his patrimony, and so a test is done. And it proves the children are his. He doesn’t believe it and rages for his wife to own up.  Finally, the mother admits that she had extensive plastic surgery long before their marriage and never told him. This ends their relationship. Court document Reason For Divorce: Ugly kids.

Besides explaining the role vanity plays in all our lives, this anecdote may also explain why everybody now talks about their various self-imposed works of aesthetics without  any qualms. “Oh yes, had this stretch last year. No, that’s not a sideburn, that’s my eyebrow.”

The real problem with this cosmetic business is that many general surgeons or other medical practitioners hop on the cosmetic surgery bandwagon in pursuit of greater profits. They have certificates all over their walls, but some can be podiatrists. Your face might come out okay, but may need a pedicure every month.

The American Board of Cosmetic Surgery recommends:

1. That your surgeon be properly trained and experienced. “He must have performed a minimum of 300 individual cosmetic surgery procedures of the face, breast and body.” 2. They recommend that you interview former patients for recommendations. If your surgeon can only turn up some guy who looks like Harvey Weinstein, hold off.

My question is, who are the people that started that 300?  Weinstein, for example, looks like he was some surgeon’s patient zero.

Who were the guinea pigs? Maybe they were dogs and cats. Maybe a lot of those cute dogs you see on Facebook aren’t dogs at all. Maybe they’re possum with facial rejuvenation. It all had to start somewhere, pre-human. I’ve always suspected the bulldog’s work went wrong.

3. Practitioners say it’s vital that you confirm the surgeon’s experience in the specific procedures you’re looking for.  Each area of cosmetic surgery requires different skills; you can imagine how operating on a nose would be quite different from operating on a breast. Who wants to wind up with a D cup nose?

4. It’s important that you get to know your surgeon: Ask yourself, do I like spending time with this surgeon? Is he truly interested in deepening our relationship? Does he like Woody Allen movies?  Do I feel comfortable disclosing my entire medical history and habits to him? Especially about my last year in college.

5. Find out about the operating facility. Your safety during surgery depends in large part on the anesthetist and the support team.

• If the nurse’s uniform says Mary Kay Consultant on it, make a note of that.

• If their computer is still using floppies, make a note.

• Make a note if the surgeon does your pre-op demonstration with silly putty.

• Always avoid a surgeon with a picture of a Katrina Doll hanging behind his desk.

• Don’t decide based on fancy brochures and wall posters only. That’s like asking Donald Trump to do a fact check.

And always remember that cosmetic surgeons have their limits. So on your fourth reconstructive surgery, consider the guy who fixes those cracked sidewalks.