The John Ozzello Memorial Food Bank gives a huge thank you to Rock Star Sailor (rockstarsailor.com) for their donation of a raffle prize for an unforgettable evening on the bay.

The amazing gift is a private sunset sailing charter for eight people, including food and drinks, valued at US$740.

The raffle tickets cost 200 pesos each and the Food Bank will only be selling 150 tickets, so get yours now, they advise. The draw date is March 5.

To purchase tickets, email This email address is being protected from spambots. You need JavaScript enabled to view it. or purchase them at Rhythm & Blues Lounge during regular business hours.

In the continuing campaign to raise money to build the first assisted living housing in the northshore, there will literally be dancing in the street on Thursday, February 15.

Us Two played regularly at the Drunken Duck in Bucerias on Sundays and enjoyed a huge local and loyal following. They are now performing in Puerto Vallarta at the Red Room and the Marriott Hotel.

Daniel and Noemi sang in different bands around Mexico before discovering each other in 2012.  They have since melded their incredible talents to create an amazing musical chemistry.

Their style of music is varied, with a playlist of artists such as John Lennon, the Bee Gees, Aerosmith, Chris Isaac, Ray Charles, Paul Simon and the Beatles – to name a few.

What you will hear and see is a soft, sexy, beat with harmonious vocals. Daniel and Noemi are an act you don’t want to miss, say the sponsors of this event.

The tickets cost 450 pesos and included in the price are snacks and two margaritas.

To purchase tickets, contact the Moxins, (322) 100-7544 or teh Jacksons, (322) 274-0679. Also email This email address is being protected from spambots. You need JavaScript enabled to view it. or buy them at the Bucerias Tercera Edad booth at the Bucerias Forever Spring Wednesday market or the La Cruz Sunday market. 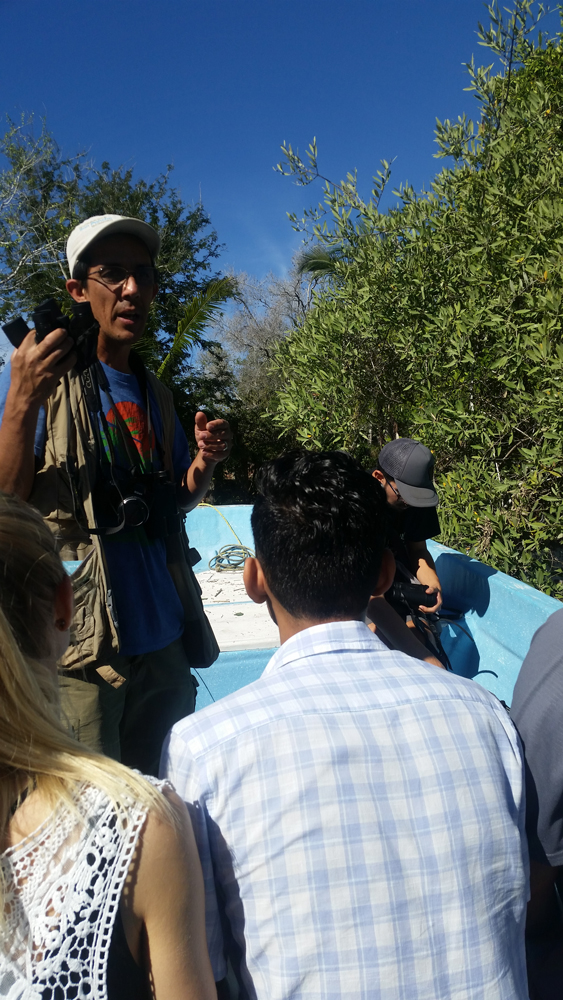 World Wetlands Day was celebrated with a full program at the El Cora Cocodrilario facility on February 2.

The event was organized by the National Commission of Protected Natural Areas (Conanp), the Islas Marietas National Park, and the Convention and Visitors Bureau of the Riviera Nayarit (OVC), in order to promote environmental education and show the public the biodiversity of the region.

“Wetlands for a Sustainable Urban Future” was the theme of the event, which was attended by close to 200 area school children, families and residents.

The program included boat tours through the El Quelele lagoon, bird watching with guides from San Pancho Birding, tours of El Cora Cocodrilario, and conferences and activities for all ages.

It was supported by many local businesses, including Vidanta, the Marival and Velas, as well as area transportation companies involved in the cleaning of the mangrove lagoon prior to the event.

February 2 each year is World Wetlands Day and the date on which the Ramsar Convention on Wetlands of International Importance was adopted on 1971.

Wetlands serve as water factories, protecting the population from hurricanes, and providing an unbeatable protection against climate change. They are an important carbon storehouse and shelter countless aquatic species of flora and fauna. However, they have been impacted by urban development.

The El Quelele lagoon, located between Nuevo Vallarta and the town of Mezcales, is one of the 100 most important places in the country for bird watching, since it is possible to find both regional and migratory species. In addition, there are up to 200 crocodiles in the lagoon region and varied aquatic life.

The free annual dental clinic provided to school children in La Cruz and the nearby village of San Quintin took place from January 22 to 25.

This is just one of a number of programs offered by Amigos de La Cruz and facilitated by their many volunteers.

The Saturday before the clinic saw the setting up of dental chairs and a mountain of equipment at the Kids Club in La Cruz.  When the event began, the Amigos team was on hand to greet the team, some of whom volunteered their time from as far away as Alaska.

Parents showed their support by registering over 200 children.

The clinic was a big undertaking – three and a half days, three dentists, two hygienists, assistants and countless volunteers making a huge difference for these Mexican children.

Many of the kids had never been to a dentist before.  Most were apprehensive, but the festive air of games, bubbles, crafts and the choice of a free prize to take with them, seemed to help.

The dentists were delighted with a new product that they were able to acquire just before their trip to La Cruz.  Advantage Arrest seals the tooth and halts further decay.  This meant that baby teeth just needed sealing if they were not badly decayed, and spared the child an encounter with the drill.

This year’s clinic attended to 176 children, compared to 106 in 2016 and 68 last year. Unfortunately, due to time constraints, 40 children had to be turned away.

There is a rumor going around that this mission was so successful that two more dentists may be sent next year.

The trip was sponsored by the Academy of LDS Dentists. Dr. Gordon Croft has headed up this international effort for many years but is intending to pass the mantle to Dr. Mark Murdock next year.  Dr. Ron Taylor is rounding up the crew of dentists. The group also included assistants and family members.  Dr. Malja, a local dentist, paid for the services of his bilingual assistant Lucia Ortega for the entire duration of the clinic.

Also deserving credit are Petra and Paty of San Quintin who provided the birria dinner for the dentists, staff, family members and volunteers. Also helping was Edd Bissell, a Punta Pelicanos owner and patron of San Quintin, who arranged transportation of the children from San Quintin to La Cruz.

Congratulations to everyone who contributed to such a successful event. The kids will remember the occasion for a long time, having left the dentist chair with a new toy and a shiny new smile. 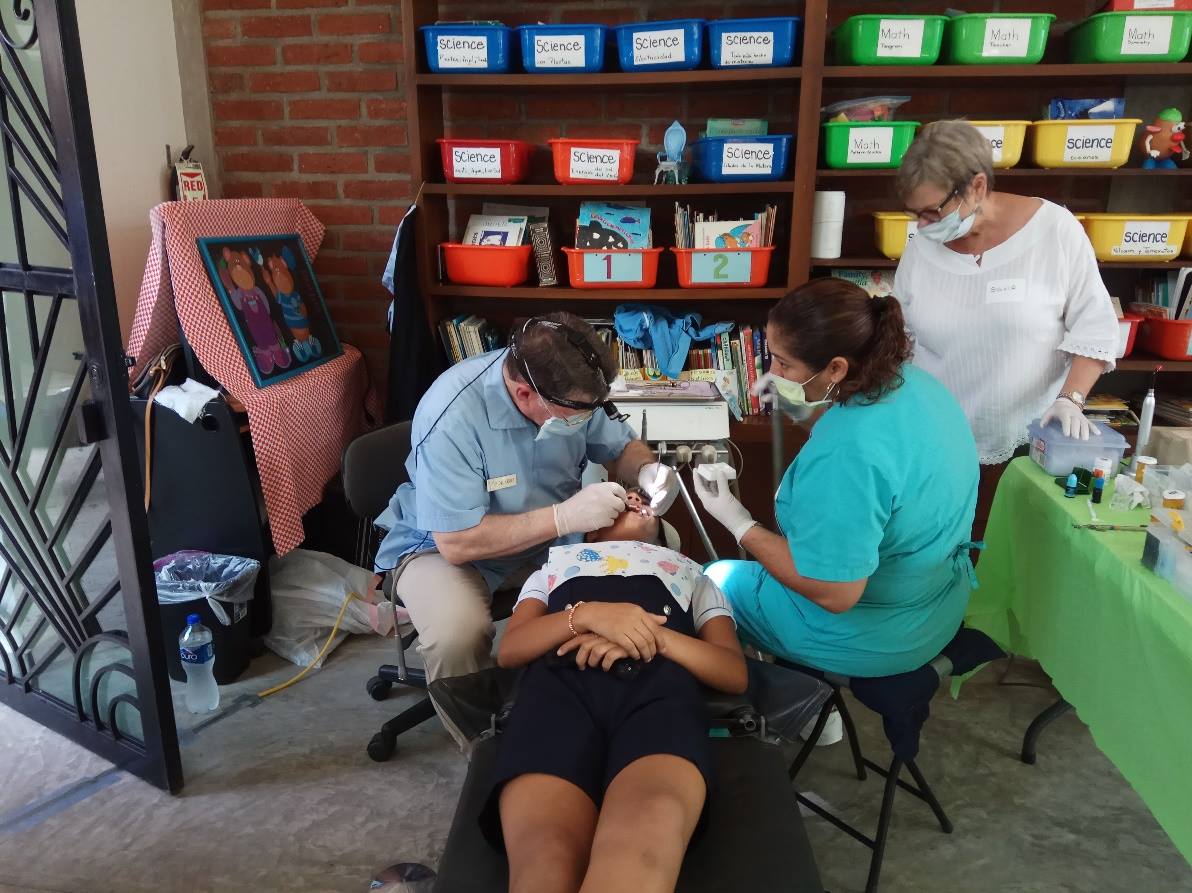 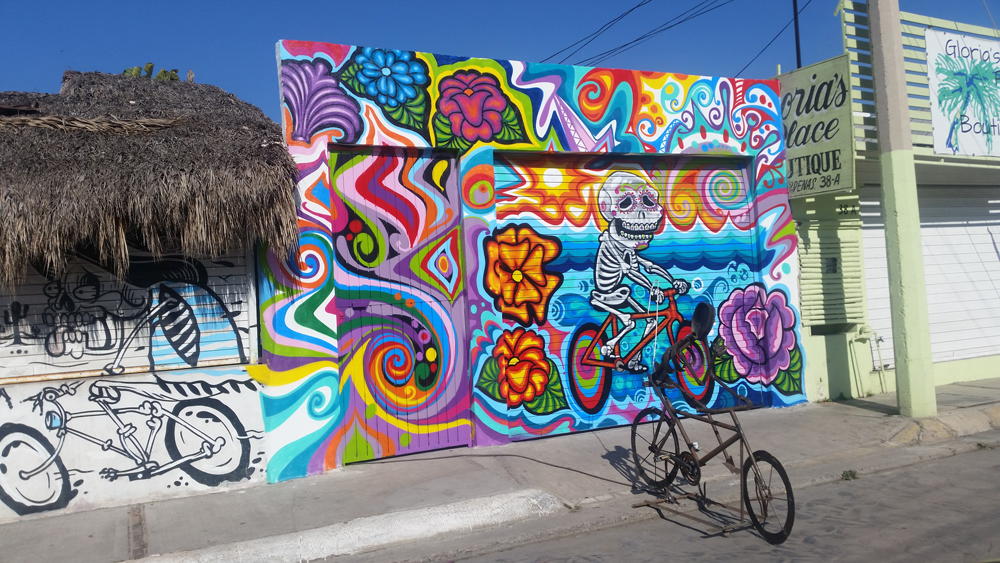 Debbie Fischer of Colorado Springs, who lives part time in Bucerias with her husband Dave, didn’t like walking past the trash pile at the intersection two blocks away from her home, so she and her house guests spent several afternoons recently cleaning up the area.

Now Fischer has moved to a new level of cleanups, “returning something” to her winter community. Together with her husband she is helping to organize the Bucerias Clean Streets Project, set for Friday, February 16.

Their goal is to beautify the two colonias of Bucerias where they walk, Las Palmas and Dorada.

With the help of Bucerias resident Susana Del Toro, a local resource for community improvement activities, contact was made with the municipal Public Services Department to ask for its assistance.

The department’s director agreed to furnish a dump truck, backhoe and some workers, to work alongside the volunteers that the Fishers will recruit.

Their goal is to make Bucerias more attractive to visitors and more pedestrian friendly by removing unsightly overgrowth from streets and sidewalks at vacant lots, as well as construction and garden debris left on the streets by property owners and their workers.

The Fischers would like volunteers to meet them and the municipal work crew at Carmen Serdan and Fibba on Friday, February 16, 8 a.m.