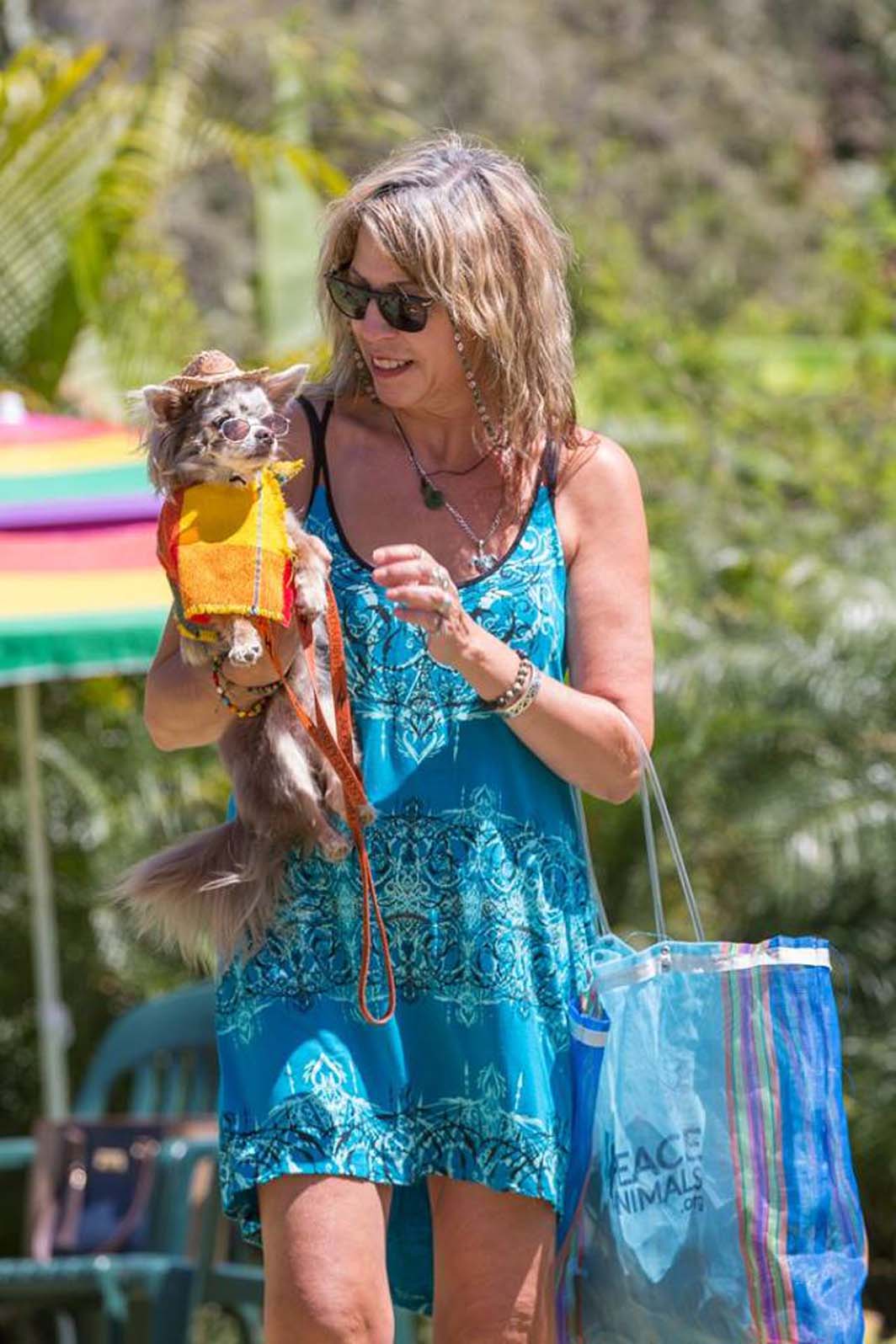 The Pet Picnic serves as a fundraiser for the Paws and Claws spay/neuter fund, but is also an opportunity for people to bring out their pets, mingle with fellow dog lovers and show off Fido or Fluffy’s new outfits or amazing tricks.

A crowd of more than 50 dogs and owners, as well as interested onlookers, enjoyed the contests.

On sale were snacks and baked goods for humans and pets and dog treats, as well as pet and non-pet related goods to benefit Paws and Claws.

The event raised approximately 20,000 pesos for a future spay/neuter clinic.

Paws and Claws’ final fundraiser of the season, held March 20 La Pizzanteria in Bucerias,  was the brainchild of committee member and Bucerias resident Margot McKenzie.

McKenzie heard a man singing on the street and enjoyed his music.

“He told me his name was Casey and that he only sang on the street … lots of people on Facebook had been talking about his beautiful voice and his great selection of oldies music.”

McKenzie asked him if he’d perform at a restaurant and he agreed. So she spoke to La Pizzanteria about holding a fundraising show there.

“The venue has a capacity of 60, and I was hoping I could sell at least 20 tickets. At first I was worried because it started slow. But four  or five days before the show, it was sold out. Ticket sales of 6,000 pesos 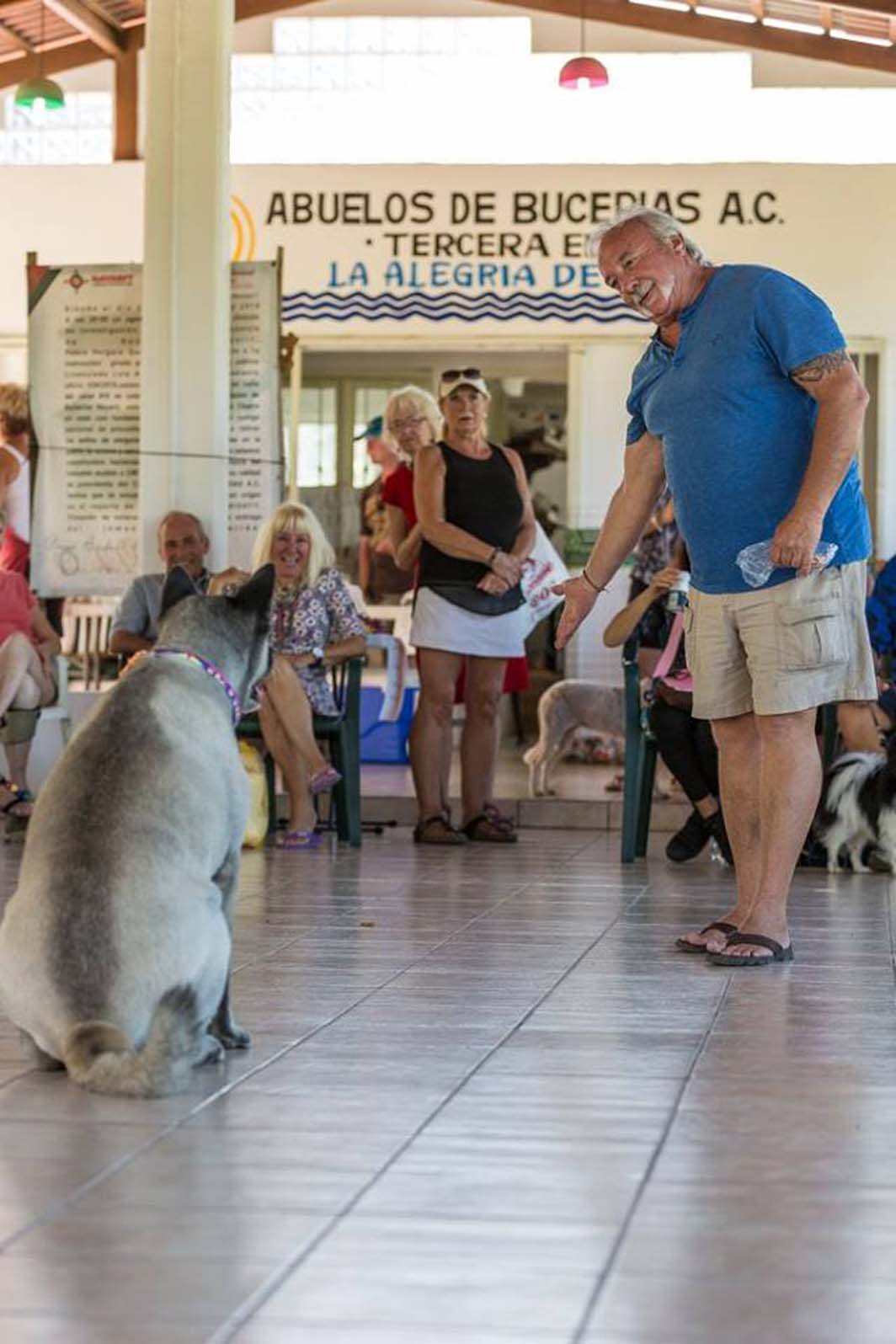 will be going straight into the bank for Paws and Claws.”

And last but not least, Bucerias jewelry artist Lisa Elliott makes and sells chain maille earrings, bracelets and necklaces. After a successful season at a local craft market, Elliott had several private events from which she has donated a portion of her sales to the Paws & Claws Committee.

It’s in the books

The Biblioteca Rey Nayar (Bucerias Children’s Library) is a community library funded entirely by donations and local fundraisers and run primarily by volunteers and managed by a board of directors of local community members.

Through the previous years, the library has had books in English and Spanish, some kids’ activities and periodic computer access.

This season an effort has been made to expand its services.

Saturday has always been a popular day, with reading activities, games, and arts and crafts led by local artists as well as the librarians.

Now librarian Benjamin de la Cruz Valdes offers homework help every Tuesday and Thursday. Children can come in and get help with their homework and also use one of the computers.

Volunteer Marge Sotomayor has formed a book club with more students attending every week.  Students submit a report on each book they have read.

At the weekly club meeting, students read and discuss books and play educational games.  After completing five reports, a small prize is awarded.

In April, the top readers, Sotomayor explained, will be invited to attend a pizza party where each will receive prizes. One student has already reached the goal needed to attend the party and she is encouraging her peers to join her.

Biblioteca Rey Nayar is located on Camino Viejo al Valle de Banderas near Colegio Bucerias.  It is open 11 a.m. to 3 p.m. Tuesday through Friday and 10 p.m.to 2 p.m. on Saturdays.

Volunteer help is always welcome. Donations of books, especially in Spanish and arts, crafts and office supplies are needed.

The 14th Annual Altruism Festival is coming up on Sunday, May 6 at Puerto Vallarta’s CasaMagna Marriott.

The grounds of the Marriot are filled with booths from each restaurant and from each of the 20 charities selected as participants and recipients of the money raised.

All the charities are local organizations who must pull their weight in planning and hosting the party. There is a big information and financial benefit to each of the participating groups.

One of the most important requirements to participate is met by selling event tickets.

This is an event not to be missed. Even if you are going to be gone for the fundraiser, consider purchasing a ticket for a friend or employee.

Tickets cost 400 pesos and will be available from Amigos de La Cruz. Contact This email address is being protected from spambots. You need JavaScript enabled to view it., Rita from Biblioteca Rey Nayar at 322-298-1263 and Janina Erban from Paraiso Felino at 322-120-4092.

More information about the festival can be found at facebook.com/FIAPV.

Local Bucerias resident Estelle Neubling saw a request from Pam Thompson of healthcareresourcespv.com in Puerto Vallarta for help to keep the pantry stocked for families of children undergoing cancer treatment.

The children assisted by this program come from poor families in the Puerto Vallarta and North Bay areas.  The organization, Canica (canicapv.org.mx), assists families with treatment, transportation to medical appointments and family support. Part of that support includes providing some nutritious food to the families. Thompson reached out to the expat community for donations of food and personal care items for Canica.

Said Neubling, “No parent should ever have to worry about feeding a child that is fighting for their life.  All I ask is that when you go to the store, pick up one extra item, rice, beans, box milk, can tuna, pasta, etcetera.”

“I know not everyone can drive into Vallarta to deliver a bottle of shampoo or a bag of beans. So I thought we need to figure out how Bucerias people can help.”

Neubling contacted a few local businesses that agreed to help her. Drop-off points for donations are Jody’s Bucerias next to the Sunshine Bar across from Luna Lounge in Bucerias Centro and the Bucerias Art Walk Plaza on Lazaro Cardenas.

Donations are then taken to Canica to be included in monthly despensas (parcels) for the families.

According to a recent article in the Reader’s Digest online edition, one of the top ten luxury hotels in the world is right here in the northshore.

Coming in at number 5 on the list is the W Punta de Mita, joining similar expensive-but-oh-so-nice hotels on the list in Abu Dhabi, Dubai, Rome and New York City.

The list is composed of legendary resorts and hotels “with style, innovation and service.”

The article, written by travel writer Susan Campbell, calls itself a “decadent countdown of the world’s most expensive luxury hotels.”

According to the article: “Super luxe meets fun and funky at this avant garde escape in Mexico’s Riviera Nayarit. There are offbeat ammenities at every turn, and loads of color and culture peppered throughout. Also a surfer’s haven and a spa lover’s retreat …”

W Punta de Mita hotel has 119 villas and one Extreme WOW Suite (its version of the traditional Presidential Suite); all of them are exquisitely decorated with contemporary Mexican touches, artisanal tile floors, and private balconies or patios.

Since its opening in 2016, the W Punta de Mita has received numerous awards for excellence, among them being nominated for the “Awards of Excellence” by Luxury Travel Advisor in the category of “Best Opening.” These annual awards span 26 categories across the globe.