“The more we learn about our Mexican community, the more rewarding it is to get involved,” say part-time Bucerias expats Pat and Dusty Strong, both volunteers at the local library, Biblioteca Rey Nayar.

The couple had always been involved in community affairs back home in Greeneville, South Carolina and felt empty just “vacationing” in Bucerias. 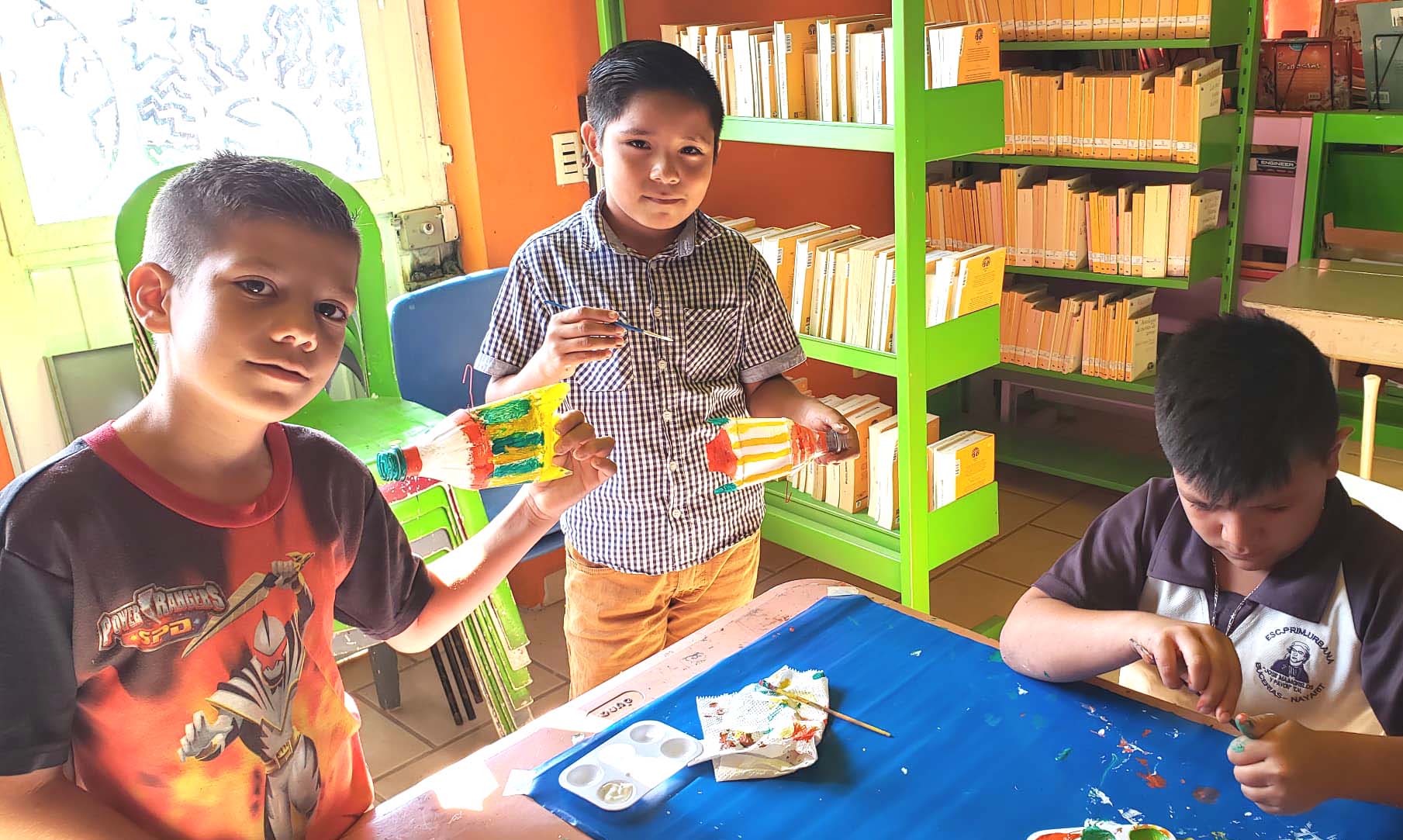 Dusty and her husband quickly learned about ways to get involved, including beautification projects of urban murals at beach access points and on the iconic “Kissing Bridge” over the arroyo.

Along with friends, they collected and sorted plastic bottles and aluminum cans from recycling baskets, a project started by Amigos de Bucerias.

Next, they and their condo friends donated funds for one of the beachside urban murals.

So this year while wintering in Bucerias, the couple decided to volunteer at the Biblioteca Rey Nayar, where once a month on Saturday mornings they help educate kids with art projects using recycled materials.

“As they learn about recycling, they will teach their parents and friends,” Dusty says.

Over the years, the Strongs have brought down hundreds of books in English.  They pick a book and the kids take turns reading to the group.  Afterwards they talk about “reduce, re-use, recycle,” followed by an art project.

There usually are 18 or 20 kids aged from four to teenager in the group. The couple tries to choose projects that interest all ages.

Says Dusty: “We try to use items that we find or would have been thrown away or recycled and use them for the projects.

“One of the projects involved wood scraps donated by a local carpenter. The kids were asked to look at their wood shape and paint an animal they saw in the piece.

“One girl brought us to tears when she said, ‘Now I have something pretty to decorate my room.  I’ve never had that before.’”

Rita Kollock, the library’s founder and director, got permission from her son to use his sea glass collection for one volunteer who makes necklaces from this material.

Says Dusty: “We collected donated plastic jars and beach sand.  The kids learned how to make sea glass Valentines for their friend, mom or aunt, by wrapping the glass with wire into a necklace. The gift was packaged in the jar with sand on the bottom, a few sea glass pieces and then the necklace on top.

“Several weeks ago, the kids talked about why people should recycle and how animals can die if we pollute. We then made cool fish out of recycled plastic bottles.

“One little boy was excited imagining how awesome a fish made from a large water-cooler sized bottle would be.”

The next recycled art project is a wind chime from wine bottles and other items.

“We get some money to buy items we use for projects by raising money before we come to Mexico each year,” Dusty says. 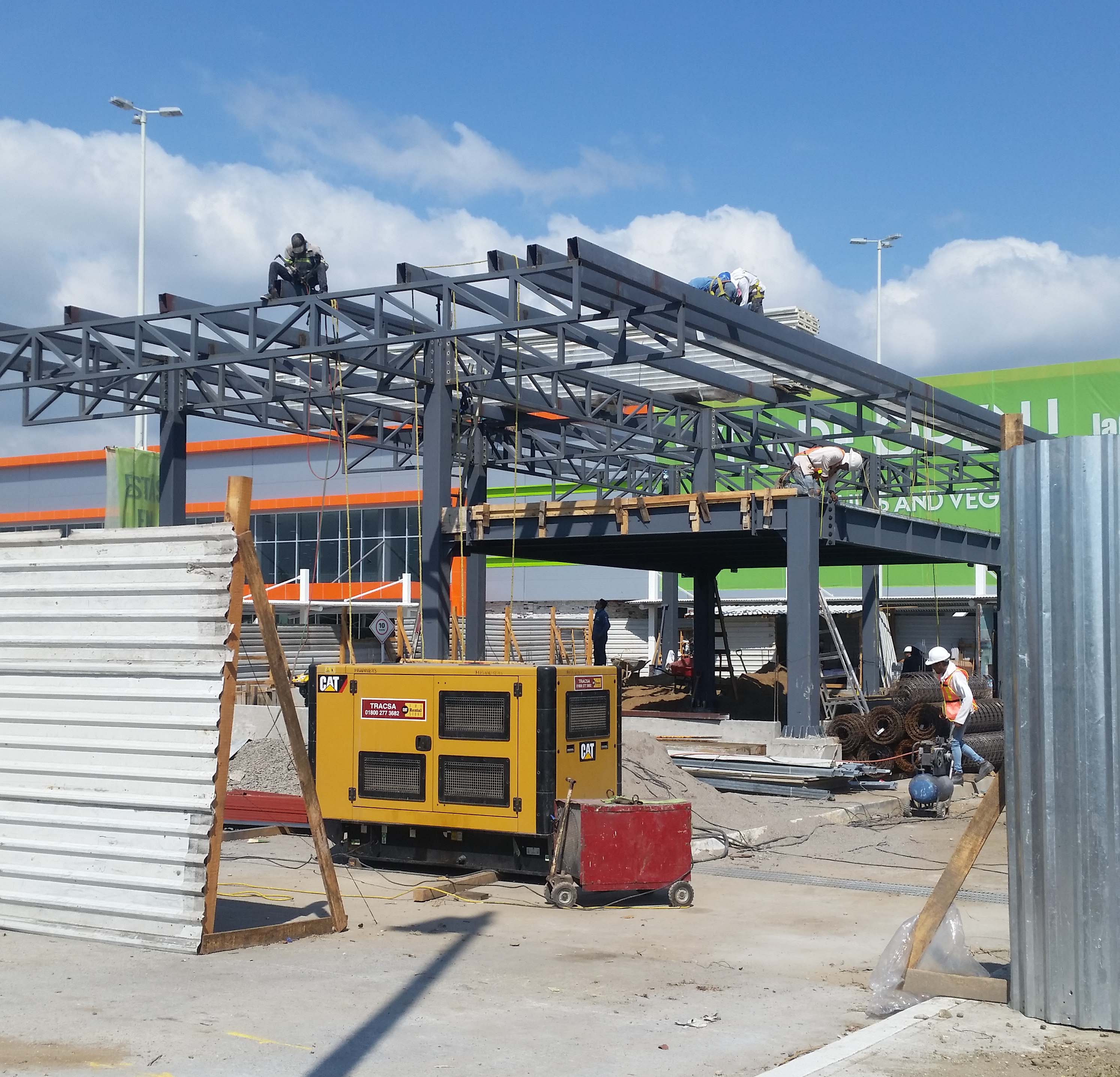 In their summer home, the Strongs hold Mexican fiesta nights or cookie exchanges and her neighbors and friends bring donations of items or cash.

“There are so many who want to help.”

The Grand Odyssey Casino in Nuevo Vallarta has shut its doors.

If Facebook posters and construction workers are to be believed, the casino will reappear next to the former El Surtidor bath and kitchen fixture and tile store on Highway 200 at the southern end of the commercial zone of Bucerias.

Construction is currently taking place behind the usually-closed gates of a building that served as a warehouse for the three nearby Riu Hotels. A worker who came to the gate said the building was undergoing a makeover for the former Nuevo Vallarta casino.

Next to the Chevrolet dealership, further south on Highway 200, a new structure under construction is slated to be a sales outlet for the dealership’s used cars.

And in front of the new La Comer supermarket, steel beams are poking up from behind the steel fencing on the south side of the parking lot.  A construction “jefe” said a Starbucks cafe is under construction there.

The north shore’s Riviera Nayarit is a sanctuary for sea turtles. More than a million and a half are released during the nesting and liberating season. Unfortunately, only about ten percent of the hatchlings survive.

If you want to participate in a turtle release, there are only a few weeks left before the low season starts.

High season runs from June and winds down in February.

Along the Riviera Nayarit coastline, turtle camps work to conserve and protect the different species of sea turtles that visit the beaches of Nayarit: the olive ridley, the hawksbill, the black and the leatherback.

1. Nuevo Vallarta is the busiest turtle camp, located in Nuevo Vallarta’s hotel zone: they release about 400,000 hatchlings per year. It’s located across from Bahía del Sol.

3. Lo de Marcos recently opened a camp on the north end of the beach.

4. Sayulita has a turtle camp located across from Casa del Mar on the north side of the beach. See facebook.com/CTSayulita.

5. Careyeros-Litibú is located in Punta de Mita and serves two beaches along four kilomters of coastline. This is where a GPS satellite tracker was placed on a hawksbill turtle in order to monitor its movements, which helped the researchers discover there was a significant bale of hatchlings in the region.

6. Boca de Tomate is located in Jalisco, just across the Ameca River from the north shore and still referred to as Riviera Nayarit. See facebook.com/seaturtlenan. 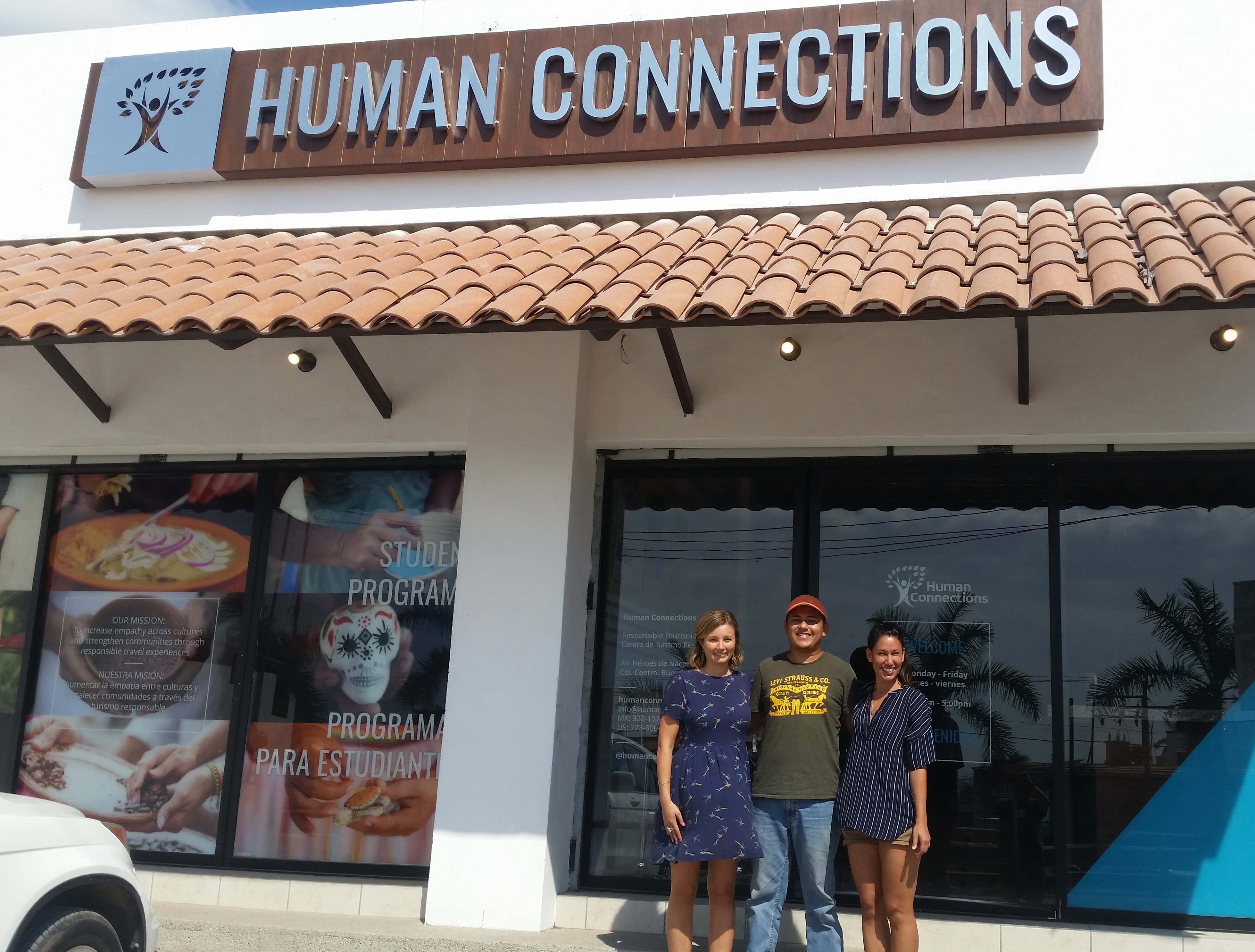 A long-awaited home for low resource Mexican seniors will reportedly begin construction this month. Fundraising for the home has raised almost half of what is needed.

Organizer Marilyn Moxin says the community can help “build walls and more” by attending a swim party event on February 14, from noon to 5 p.m. at Los Arroyos Verdes.   “For 450 pesos, bring a swimsuit and towel and spend an afternoon of swimming, have a fantastic buffet, enjoy live music featuring Perlita and Mezcalito Pop and participate in the silent auction.”

“Mural fever” is alive and well in Bucerias, with over a dozen painted currently and more on the way.

One mural painting project just wrapped up, while a multi-panel mural just began.

Bucerias resident and artist Linda Carlson stepped up to paint a new mural, replacing one that had seen better days on the wall facing the beach below the statue of the diver.

Carlson noticed the faded and worn painting of a mermaid scene when a photo was posted on Facebook of a beach cleanup group toiling away with the worn mural in the background.

She knew right away that the wall needed updating and she was just the person to handle the job.

In 2018, Carleson opened a kid’s art studio in Bucerias called Sol Arte. She volunteered her artistic talents and piqued the students’ interest in refurbishing the long-neglected wall.

Carleson designed the layout, featuring coral and creatures of the sea: crabs, turtles, fish and seahorses.

She and her husband Bobby Macklan were joined by 20 adult and child helpers, beginning work in August of last year.

Carleson says her crew of painters “included a very artistic beach vendor and his son who took time off from selling nearly every week.”

The finished product was celebrated with a “signing party” of many of the artists on January 14.

An upcoming pizza party is planned for the energetic muralists.

The Bahia de Banderas municipality recently received three ambulances to be based at two municipal hospitals.

They will be used to transport patients needing treatments that are not currently available at the local hospitals in San Pancho and El Tondoroque.

Patients will be taken to trauma hospitals in Tepic and Guadalajara, in both directions if needed.

The new ambulances may also be used for local emergency service when called for.