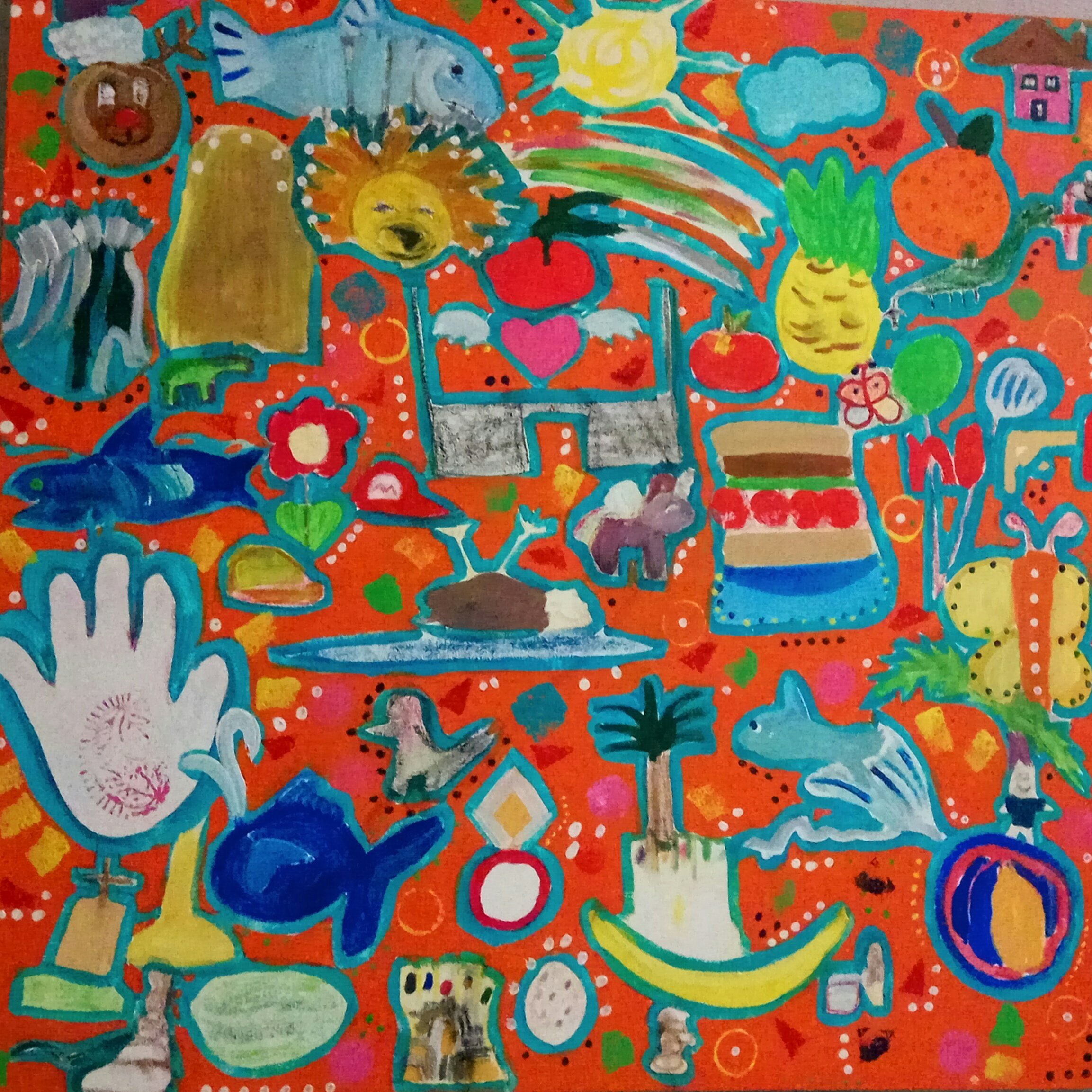 In order to make the classes fun and interactive, Hache said she decided to involve the children in a game of “art charades.”

In this game, Hache explained, each child comes up to the easel and chooses a piece of folded paper out of a bowl. Each contains the name of an object or animal, written in both Spanish and English (to help the children with English language skills and their teacher with Spanish).

After the first classes, Hache took the painting home to fill in the background and add a few embellishments.

The end result was a beautiful piece of collective art the children titled ‘Class Act.’”

Another piece, from a class several weeks ago (art classes continue until the end of March), stood out to visitor David Hibbard, the Amigos de La Cruz president and a volunteer at the Kid’s Club after-school programs.

“He was blown away when he saw the finished painting,” said Hache.

Said Hache: “The artist and student then discuss what it is and choose whether they want to create their artwork in acrylic paint or oil pastel.”

He then asked Hache if it could be placed in the March 20 Amigos de La Cruz Sail Away fundraising art auction.

“I thought it was a fantastic idea, for the children and for Amigos,” said Hache.

The second edition of La Cruz Market’s fundraiser for Parque El Mangal is set for Oso’s Fish Market Restaurant on Wednesday, April 3, 5:30 p.m. The cost is 400 pesos and includes dinner and one drink. 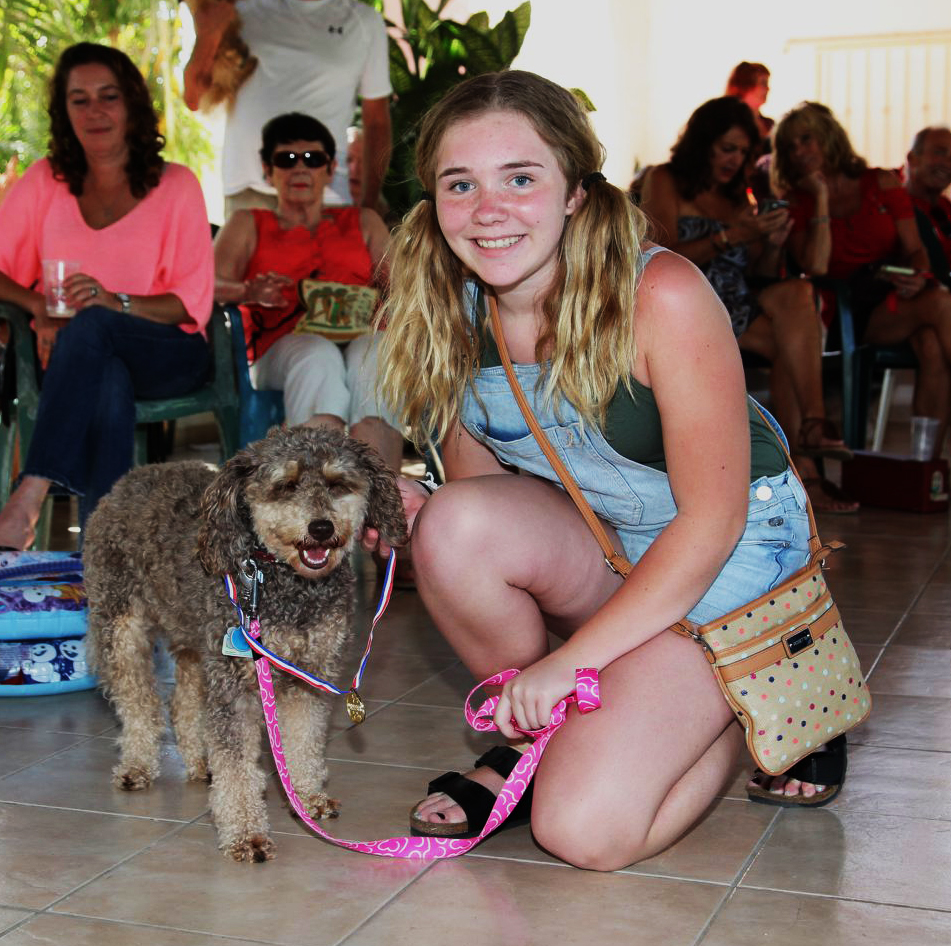 The fundraiser art event will help improve the popular park.  The priorities are to repair the children´s playground, expand the volleyball court so it can also be used as a basketball court, and install the baskets.

The first Surfing With Nixon event in Mexico took place in Nuevo Vallarta on Thursday, March 14.

Twenty-five children with disabilities took surfing lessons in Nuevo Vallarta, helped by the best instructors in Bucerías and Sayulita.

Surfing With Nixon (surfingwithnixon.org) is a charity based in Phoenix, Arizona that helps kids with disabilities, especially those with autism, giving them the chance to try their hand at surfing.

The group of 25 area kids with disabilities enjoyed one of the coolest water sports around, together with Pasitos con Luz and Mexican instructor Geovani Pérez.

Daniel Romney, originator of the event, says water therapy has been shown to offer lasting benefits to children with special needs, with surfing being particularly effective.

The activity was held on the beach behind the Villa Varadero hotel, where 20 local professionals from the Sayulita Surf Co. and Bucerías Surf schools were on hand to teach the kids how to hop on the boards and ride the waves.

Chris Jacobs of the events and communications office of Pasitos de Luz in Casa Connor said there are plans to make this an annual event and invite more children, as well as attract sponsors such as Quiksilver and Hurley.

Supporting this type of charitable events is part of the social commitment of the Riviera Nayarit Convention and Visitors Bureau (CVB) and the Bahía de Banderas Hotel and Motel Association (AHMBB).

“This event also goes hand in hand with one of the signature activities of our destination: surfing,” said Marc Murphy, managing director of both entities. The Riviera Nayarit is one of the best destinations in Mexico to practice surfing. It offers some of the best reef breaks in the world and there are over 30 spots for surfing with long or short boards or enjoying the challenging stand-up paddle, with waves ranging from small for beginners to gnarly ones for the pros.

For more information, see facebook.com/pasitosdeluz2 or send a WhatsApp message to 322-137-1890.

The area’s first vegan and vegetarian festival took place in Bucerias on March 1.

Organizers started putting the event together after contacting vendors who sell different types of food, reusable products, environmental friendly and recycled goods, etcetera.  They report they had over 40 vendors presenting products.

“We not only wanted to bring the vegan and vegetarian kitchen closer to people but also educate them about what benefits this type of diet can have for your health and how to activate their bodies,” one of the organizers said. “That’s why we also held workshops with different topics and a yoga session that evening.”

Some 100 dog owners and their canine companions came out on Sunday, March 10 to enjoy the annual Bucerias Paws and Claws Pet Picnic, benefitting their spay and neuter program.

There were plenty of entertaining contests for dogs and their owners, with recognition for best dancer(s), dog-owner look-alike and best tricks.

In musical mats, similar to musical chairs, it was a challenge to get the dogs to stop and lay down on a mat as the music halted. The audience enjoyed the show, including watching the dogs who had their own ideas of what they should be doing.

The emcee, Bucerias resident Norm Witkin, entertained the crowd both with his commentary about the show and some magic tricks.

Raffle prizes were donated by many local businesses. In addition, food and drinks were on sale and there was a 50/50 drawing.

The winner of that drawing, Kitty Leonard, generously donated much of it back to the cause.

The Pet Picnic was the final fundraising activity of the season for the Bucerias Paws and Claws committee.