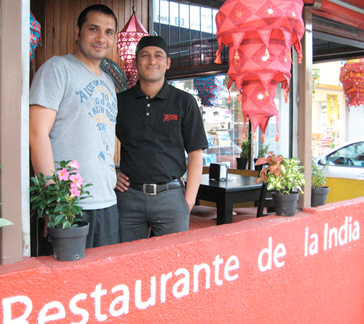 For seven years, the tiny Guadalajara restaurant Goa has been beckoning customers in from Lopez Cotilla near Chapultepec with its vibrant multicolored lamps hanging from its vibrant yellow porch and of course its vibrantly seasoned northern Indian cuisine.

Now along comes Goa 2, located a few kilometers southeast of the mothership and the brainchild of entrepreneurs Vijay Chaudhary and Raj Singh, who teamed up when they left India as adolescents to study cooking and hotel management in Luzern, Switzerland.

“I couldn’t even make tea then,” confesses Chaudhary as he takes a break from the demands of opening the new restaurant just last week.

But now he gives a tour de force of Goa’s menu, Indian ingredients, and even the history of Indian cooking with the aplomb of the chef and food aficionado he has become, thrilling the listener with plums of cooking lore.

“Tandoori means oven,” he explains. “Most of our dishes are made in a clay oven. They originated in Persia and came to India 500 or 600 years ago with the Mughal rulers.”

“There are 30 types of lentils in India,” he throws in later. “Not just the black lentils they sell here. Our lentils are imported.”

Goa 2 has added Southern Indian cuisine to the menu offered at the first restaurant, Chaudhary emphasized.

“Our chef at Goa 2 has only been here 20 days. He is from Southern India. There are many southern Indians here who work at Tata [giant international company with an office near Goa 2] and they like this type of food. The old Goa is very successful but it is small. So we had to open this one,” he said, gesturing toward the bar, kitchen and 13 tables, with picture windows fronting the tree-lined Avenida Niños Heroes.

Asked for the highlights of Goa 2’s menu, Chaudhary seems a little daunted. “There is a lot that is new. Chef Heera brought recipes such as Chicken Chettined, which is special from Goa, an area in Southern India that was a colony of Portugal.” (As an aside, Chaudhary explains that the name Goa was chosen for the restaurants because of the state’s worldwide fame and because it is the same in English and Spanish.)

Many varieties of dosa (large, crisp crepes) and idly (steamed balls of rice and lentils) are among the new southern dishes. Ten vegetarian entrees are also featured, alongside appetizers and entrees that feature lamb (imported from New Zealand) and chicken (imported from Chile).

One of these is the apparently famous Butter Chicken, with its sauce that includes tomatoes, yogurt, cardamom and of course butter.

“A group of Americans walked by the other day, they came in, and I explained the whole menu to them, and do you know what they ordered? Butter chicken,” Chaudhary laughs.

I was treated to a meal of specialties only offered at Goa 2. First, an appetizer of chopped, marinated lamb kebabs (Lamb Glaffi Seek Kebab, 85 pesos) served with two sauces — mint and cilantro/yogurt — and salad. The four delicious lamb chunks, almost a sausage, were pungent and not too spicy and could almost have been a main course.

Next, came a vegetarian dosa (crepe) filled with cashews, potatoes, onions, seeds that looked like corn, and spices. They were served with two sauces — a yogurt and coconut chutney and a savory lentil sauce. (Cashew Rava Masala Dosa, 120 pesos).

“Would you like to try Butter Chicken?” Chaudhary asked next. But as I nodded, he changed course, and I was glad he did, because the fairly spicy Chilli Chicken that was soon placed in front of me, was familiar with a delightful twist. Basically, it was Sweet and Sour Chicken, with green peppers, onions and pineapple, but the sauce had an Indian touch and was a bit hotter than the Sweet and Sour served in Chinese restaurants. Chaudhary noted that the chef will make any dish as hot or mild as the customer requests as well as make special dishes.

“We don’t serve Vindaloo dishes,” he said. “But some Americans come in wanting dishes that are hot, hot, hot.”

Goa 2 will  have a beer and wine license in a few days, Chaudhary said, and expects to get a full liquor license later. Indian music videos show in one section of the restaurant.
Goa 2, Avenida Niños Heroes 2958, Colonia Jardines Del Bosque between Firmamiento & Lorenzana. (33) 3121-1248. Open Mondays 4 p.m. to 10 p.m., Tuesdays through Saturdays 1 p.m. to midnight, Sundays 1 p.m. to 10 p.m.