While fine French food is uncommon here at Lakeside, St. Remy delivers some interesting Gallic wonders. It is peculiar that so little of French culinary influence exists in Mexico, given long-term French immigration here and the short colonization 150 years ago. So St. Remy is a rarity.

St. Remy is Mexican in its terraza setting (the dining area) with a neutral décor that could be simply modest Spanish revival. The terraza overlooks a vast open and airy garden that stretches out to a quiet private roadway. 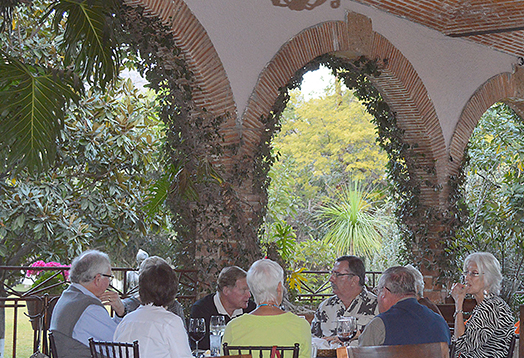 The offerings are classic French cachet, from duck confit to delicately prepared filet of beef to salmon and fish of the day. As with most French cuisine, it is the world-famous sauces that deserve much of the attention and praise. These are arguably the essential component of fine French dining, from foretaste to their lingering aftertaste.

Our table of four started with a fetching appetizer: melted provolone baked into a slice of smoked eggplant and dressed with chunks of cherry tomatoes and a robust pesto sauce. It went around the table quickly, and went down brilliantly with an Argentinian malbec. (The wine list at St. Remy is top of the line.) Fresh brown, grained bread was a nice surprise, too. Wonderful start.

Then came entrees presented as art. Not a dribble or smear to ruin the effect, and all rich with a pallet of colors. My filet of beef tenderloin was covered with a dark, buttery sauce created from the tangs of several different pepper corns, cream and Worcestershire sauce. The beef cut like butter and the dominating peppery sauce turned it into something exquisite. Along with the beef came a lasagna made from potatoes, spinach and a slight layer of cheese dressed lightly in a red sauce. A bed of carrots were almost too thin to be forked and glazed gently and sweetly.

A table mate had the duck confit, a crispy, flavorful bird that somehow was not heavy or fatty, but light and tender. Its Lyonaise sauce was appropriately light and understated, but resonant nonetheless. Accompanied with shallots, string beans and rosemary-sauteed potatoes.

A carousel presentation of shrimp nested in capellini, one of the specialties of the evening, and ordered by another guest, came picturesque in a splash of shrimp colors, including a light rose sauce on the capellini. Not quite as tender as camarones should be, the shrimp were a tad “al dente,” but the sauce helped rescue the dish with a delightful fresh complexity of flavors.  Our fourth companion had a specialty salad of leafy and color-varied vegetables and other crunchy, nutty ingredients, with a wistfully light balsamic and herb dressing.

My only alert: St. Remy exists somewhere in a maze of directions that would crash your GPS. It can be found only with careful navigation at the farthest reaches of El Campo, south along Calle De Las Flores, from there follow the signs to an El Campo right turn. Pass what is an unmarked open archway that appears to be the main entrance but is NOT. Proceed to the parking lot of red volcanic stones on your right and park. The official entrance is back on the northeast side of the parking lot, what appears to be a service entrance. St. Remy needs one final sign at the arched street entrance, saying: Please Enter From the Parking Lot. That would remove any confusion. Finally, the pricing is in the upper registers, although flavors, presentations and service expectations were exceeded in every way.