If you want to taste a fine-dining chef’s homage to his country’s folk cuisine, look no further than Guadalajara’s Trasfonda, brought to the eating public by the creators of Restaurante Alcalde (see review in Reporter, December 23, 2017 ), recently named 36th best restaurant in Latin America.

In today’s blemish-magnifying social media glare, people of even modest renown feel compelled to apply chalky foundation and rouge to the countenances of their public image.  And chefs, those terrorizers of countless line cooks, servers and assistant managers, are no exception.

One stratagem these Croc-wearing leviathans employ to boost their public image is to open a satellite restaurant that offers what they deem as more grounded fare, a glint for the unwashed masses of the chef’s genius that would otherwise blind (or bankrupt) the naked eye of the average pleb.  Notable culinary sideshows range from normal sit-down restaurants like Bouchon in Napa, opened by the French Laundry’s Thomas Keller, to fast-casual joints like burger spot Shake Shack in New York, founded by legendary restauranteur Danny Meyer as a pop-up inside the rarified Eleven Madison Park.  Many of these second-act establishments have even managed to creep out from their progenitors’ long shadows and establish their own identity – plucky artistic apprentices successfully striking out on their own.

Trasfonda, a tiny jog west of Chapultepec in the Colonia Americana neighborhood, hews to that same model, being a more casual side-car to Restaurante Alcalde, Guadalajara’s haute Shangri-La.  It features comforting mainstays of Mexican cooking the same way the aforementioned Bouchon offers French bistro classics like mussels and french fries and escargot. 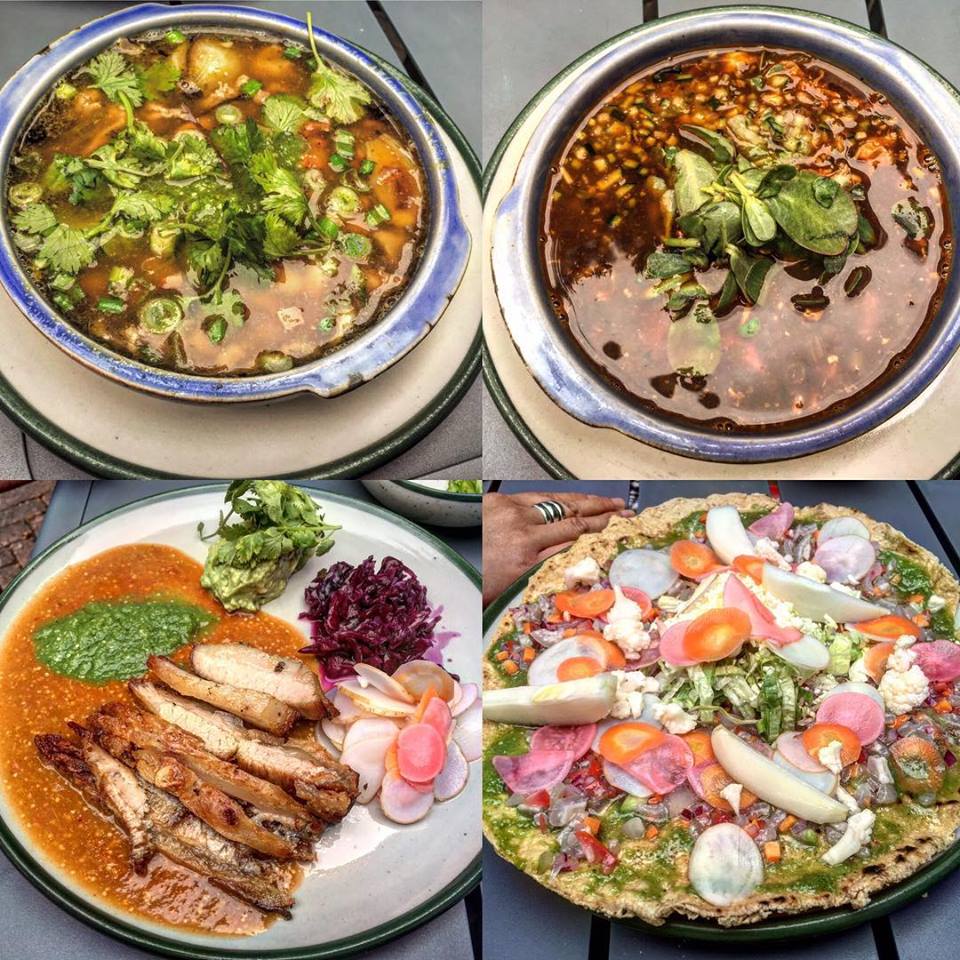 Francisco “Paco” Ruano, chef/owner of both Trasfonda and Alcalde, honed his craft at the keen knife points of several exacting European chefs, including Rene Redzepi  of Noma, crowned several times the world’s best restaurant by the thuggish taste makers at San Pellegrino, and while the plating, pacing and refinement and subtlety of flavors at Transfonda betrays Ruano’s pedigree, he’s not the only one with his hand on the gear shift.

Enrique Franco is the restaurant’s chef de cuisine, the second-in-command who often shoulders a larger burden than his boss whose name is on the marquis. Chefs de cuisine do quite a bit of menu creation, and have the thankless job of making sure it all gets executed successfully plate-by-plate, day-by-day, week-by-week, ad nauseum.  But according to our young waiter, Ruano does poke his head in quite often – understandable, seeing as the restaurant has only been open for nine months.  Having been a part of the opening staff of a restaurant in San Francisco I can attest to the tissue-like delicacy and vulnerability of newly opened restaurants.  They’re like wobbly-legged ostrich chicks freshly hatched and covered with bits of blood and shell, with their giant mothers – the chefs and/or owners in this overwrought metaphor – anxiously following their every move to make sure they don’t wander off a cliff or into a hyena’s patient maw.

But while a few of the wait staff seemed a tad green at times, the rest of mine and my companion’s experience betrayed very few signs of first-year unsteadiness; the food was exactly as you would think it would be, that is, a series of classics given a few creative tweaks and arranged more prettily than the fare of a typical neighborhood restaurant.

The meal began promisingly with a massive tostada smeared with spicy green chile and piled with an array of brightly colored pickles and diced cuerito, lightly pickled, translucent pig skin.  It’s sheer size almost proved our undoing, as we had already allowed the shrill, overbearing dictates of our ravenous appetites to drown out the tentative voice of reasonable restraint.

Course two (we had ordered so excessively that coursing was a necessity even at a nominally casual restaurant) was fideo seco, a small, curious bowl of noodles coated with a red chile sauce (while tasty, they looked as if they’d been scooped directly out of a Chef Boyardee can) and topped with cotija cheese and avocado, followed by a platter of pork jowl chicharron with a sauce made from the milpero tomatillo.  While nothing fell flat, the chicharron belted out a note a few octaves higher than the rest of our fare.

Two substantial stews formed our final course, the first consisting of espinazo, or spine, in an acidic, slightly viscuous broth filled with petals of purslane, the second carne en su jugo, bits of beef and bacon floating in a stew made from its own juice, with cilantro, onions and spices adding their earthy perfume to the over-the-top richness of this homey gut bomb, a gustatory ordnance freighted with a side of thick house-made tortillas, impossible to consider not using to sponge the last hint of meaty liquid out of the shallow clay bowl it which it arrived.

Those booze-inclined can avail themselves of Trasfonda’s veritable dead sea scroll’s worth of wine, beer and spirits.  The cocktail list, like the food, sticks to the classics.  I opted, somewhat lazily, for a cold bottle of Corona.

The sun had begun to start its slow descent towards the western horizon when we, two bloated wrecks pinned to our chairs by a textbook case of overeating, received our check.  Both aware of the restaurant’s high-end provenance – and painfully aware of the unrestrained zeal with which we had selected our repast – we were well braced for the eventual reckoning with a substantial check.  It didn’t disappoint, but neither did it send our financial glands and tissues swelling with anaphylactic shock.  A more conservative breed of diner could easily walk away from a meal at Trasfonda no more than 200 pesos poorer.

Keep in mind that Transfonda is also open for breakfast/brunch.  Bank on it being something more impressive than rubbery eggs and watery Hollandaise sauce.  Their french toast looks especially enticing (with platano prepared two ways), as does the Tosta Trasfonda (rustic bread topped with bacon, salsa, cotija and a fried egg).