The stylistic breadth in evidence at last Sunday’s Fiesta de la Musica, an annual multi-stage affair in Guadalajara, seemed to warrant optimism regarding the state of the city’s music scene, specifically as it concerns its eclecticism and heterogeneity.  That vigor was exemplified by two bands, each teasing Parque Agua Azul’s sultry air with two very disparate sonorities: electro cumbia and shoe gaze/noise rock.

Guadalajara’s annual Fiesta de la Musica – modeled after an event in France called, not unexpectedly, Fete de la Musique – was given life in 2001 by a local cabal consisting of the municipal government’s cultural ministry, Guadalajara’s Universidad Libre de Musica (ULM) and Alianza Francesa, an organization dedicated since 1883 to the benign diffusion throughout the world of French culture.

“The music will be everywhere and the concert nowhere,” said French bureaucrat Maurice Fleuret in 1982, the year he was appointed Director of Music and Dance by Jack Lang, then the Minister of Culture for the French government.  “I will create a sound liberation, a drunkenness, a dizziness which is more authentic, more intimate than the art itself.” 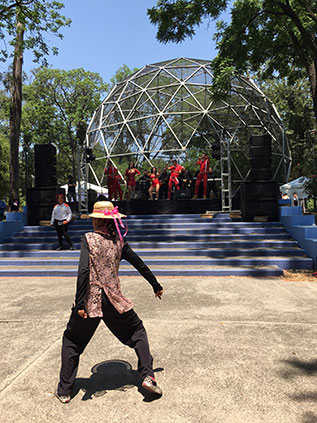 Sifting through this strange Continental gibberish, it can be gleaned that the event was to be – and would indeed become, at least while it remained in the hands of Fleuret – a free-for-all of live music, taking place spontaneously throughout a given city and expressing the artistic will of the populace.  Furthermore, it was to feature not only professional musicians, but amateurs as well: a grand gesture of aesthetic democracy.  Finally, it was decided that every Fete de la Musique would occur on the summer solstice, the longest day of the year.

The first Fiesta de la Musica in Guadalajara – in fact, all of them apart from this year’s – took place along Paseo Chapultepec.  While conforming somewhat to Fleuret’s concept of urban integration, the organizers decided their version would differ from the French original in a couple of key ways: since the solstice in Guadalajara is usually concurrent with torrential downpours, it was decided to eschew that part of the tradition.  Also jettisoned was the atmosphere of fluid, controlled anarchy that Fleuret seemed to think was going to bring about a kind of enlightened artistic utopia.  Instead, 30-odd tightly scheduled performances would occur at five stages arrayed along key points of intersections with the Paseo: Mexicalzingo, Guadalupe Zuno, Libertad, Pedro Moreno and Justo Sierra.  In other words, spontaneous musical outbursts by non-professionals outside of carefully dictated boundaries was discouraged.

This year, the event further deviated from Fleuret’s original vision.  It was decided that instead of taking place in the city streets, the festival’s smog-choked urban rug was to be rolled up and sent flying some kilometers southeast, where it would be shaken out over the verdant, peaceful expanse of Parque Agua Azul, the green jewel in central Guadalajara’s breast.

All of which begs the question: does Guadalajara’s Fiesta de la Musica bear any resemblance at all to Fleuret’s Fete de la Musique, or is it just another multi-stage outdoor music festival?

You may recall the mention earlier of a transformer mask.  Actually more of a helmet, it covered the blonde dreadlocked head of Giancalor, leader of La Calor, a Guadalajara-based trio of late 30-somethings which specializes in the music known as electro cumbia.  On a platform below the giant mesh butterfly conservatory that serves as the park’s centerpiece, they combined pre-programmed beats, samples and strange sound effects with live percussion and heavily-processed vocals, all buoyed by the compulsively danceable rhythms of cumbia, a Colombia-born music that rattles window panes from Ushuaia to El Paso.

Apart from processors, laptops, and various pieces of percussion, La Calor make copious use of a variety of items they’ve plucked from flea market blankets and table tops around the city and fitted with pickups and patch cord jacks.  An example of one of these repurposed gadgets was a plastic yellow house small enough to fit into the crook of an arm and covered in buttons that when pressed sounded out various words, letters and numbers.

All this gimmickry might have become tiresome had it not been for the trio’s skill, aplomb and sense of fun in executing what is essentially a musical sausage made of ground-up cumbia spiced with European electronic music and a dash of a child’s afternoon nap-dreams fueled by an overdose of Cocoa Pebbles and Saturday morning cartoons.

The three members of La Calor also have backgrounds in funk and salsa, making for an engaging Pan-American sonic gumbo – an excellent soundtrack for all-night beach parties.  In fact, they’re next gig is Saturday, June 17, at the Corona Sunsets festival in Tulum, Mexico.

The band known as Norwayy (with two Ys), purveyor of what the writer perhaps glibly termed “shoe-gaze noise rock” at the beginning of 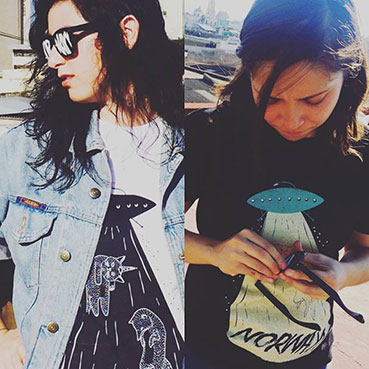 this piece, is a good deal more serious-minded, the four young players gazing pensively into the middle distance while churning up a dreamy, throbbing racket that frontwoman and bandleader Gabriela Navarro cautiously labels “lo-fi” and/or “cool wave”. Chatting for a minute after the band’s 35-minute set in the park’s small covered amphitheater, she cited such groups as Beach House, Best Coast and the Raveonettes as influences.  She and drummer Rocio Marquez, the group’s core, met at the University of Guadalajara, becoming fast friends through shared interest in pursuing music. They formed a band soon after graduating.

“We play at bars and events around town, but what we’re really looking to do is record our second EP and get out of Guadalajara for a bit, play around Mexico,” said Navarro.  You can find their first EP on Spotify, iTunes, Bandcamp and Soundcloud.

Two bands: the first consisting of three men limber as salt water taffy, bouncing around a small concrete platform to relentlessly optimistic Caribbean sonorities while poking at wire-rigged toy houses; the second, a quartet of recent college graduates playing loud, atmospheric rock moody enough to make a murder of crows decide to start combing their feathers over one eye.

While it may seem that Maurice Fleuret’s conception for the Fete de la Musique – as a celebration of aesthetic omnivorousness and free-wheeling creativity – has been altered beyond recognition in Guadalajara, it could be said that some of its spirit remains intact by virtue of the coexistence in a single festival of these two stylistically divergent groups.