After a night storm Thursday, October 31, felled a large tree – and its resident hive of bees – a squad of Guadalajara bomberos (firefighters) and apicultoras (apiculturists) showed up the next afternoon to cordon off streets near Avenidas La Paz and Union in Colonia Americana and deal with the tree, which was leaning on an art gallery, and the bees. 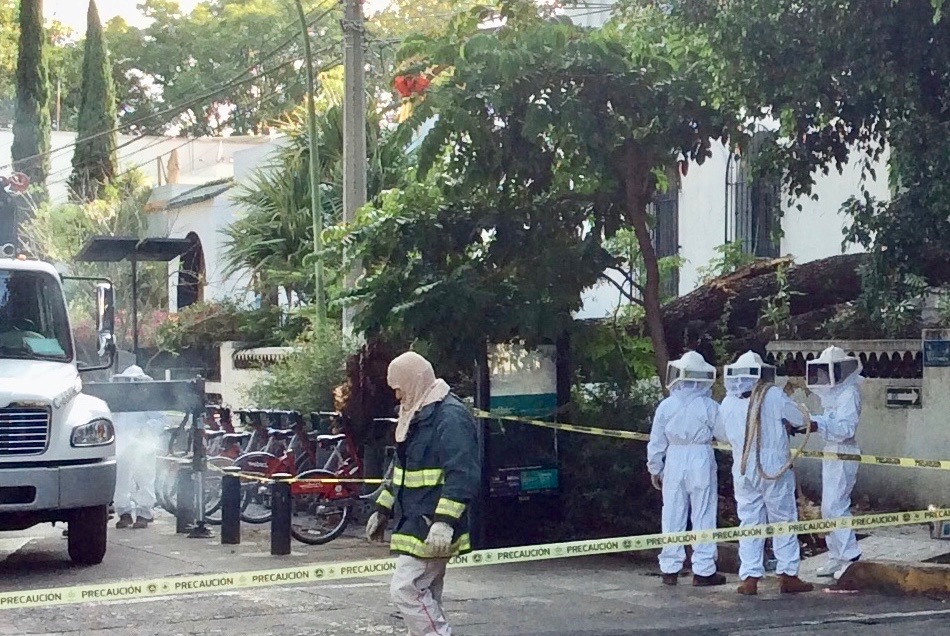 “They can be aggressive,” said an articulate firefighter who stood nearby, directing a few passersby to cross the street as the apiculturists worked and a few stray bees moseyed about. He was one of approximately ten personnel gathered to deal with the emergency.

Even tree removal alone can be dangerous – the U.S. Tree Care Industry Association cited 129 deaths and 59 serious accidents related to tree removal in 2015.

A neighbor living 1/2 block from the site commented that a few years ago a swarm of bees had killed his cat, which had been confined in a small, walled patio. (Reports of multiple stings causing death in humans occasionally surface in the media and note that an individual’s sensitivity to bees render some people more vulnerable.)

The apiculturists at the site, dressed in protective, white suits that include wide-brimmed, netted hats, arrived in trucks, including one with a crane, and they wielded a bee smoker, which emits smoke that calms bees, and sturdy grey boxes. They spent several hours clambering over the fallen tree and nearby walls, removing the colmena (hive) and finally enclosing them and the bees, including the queen, in the boxes, ready for transport in the trucks.

Meanwhile, the firefighter shared a scrap of honeycomb, about the size of a lemon and oozing deep golden-brown honey, with onlookers from a nearby restaurant.

“It’s delicious,” someone commented appreciatively, and it was – tangier in flavor than store-bought varieties. In a few minutes, perhaps attracted by honeyed fingers, a bee or two, not all of whom had been sequestered in the boxes, came over to investigate.

“Don’t hit at them,” the firefighter directed. “Walk away normally.”

The firefighter noted that bombero crews used to kill the bees when they were called. However, killing is now prohibited, since bees are endangered.

“The apiculturists will take them to another area and release them,” he said.