Chapala area expats will have the opportunity to share the commemoration of the Day of the Dead with their Mexican neighbors at a series of special public events starting next weekend. 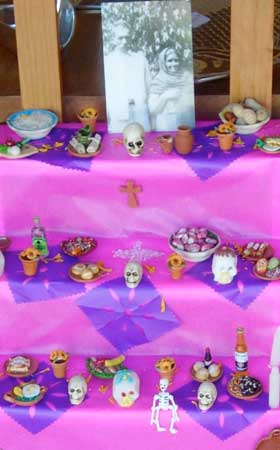 The program opens with a parade of junior high students dressed up as classic catrina and catrin skeleton figures and seasonal music performed by children in pre-school and primary groups.

The festival will also feature a display of a half-dozen Day of the Dead memorial altars decorated by primary classes. In keeping with the Pan American Games, the offerings will be dedicated to outstanding athletes from participating nations who have gone on to meet their maker. The school’s parent association is in charge of the booths selling an array of typical Mexican food commonly associated with the holiday. Grade nine students will run a Spook House to raise funds for their 2012 graduation festivities.

The Loyola campus is located in San Antonio Tlayacapan, next door to Lakeside Little Theatre. The festival is open to the public free of charge.

Look for a full rundown of upcoming of Dia de Muertos events in next week’s Reporter.