“I always knew that I could sing in a high register when I wanted to because I used to mimic my soprano sister,” says Guadalajara-born counter tenor Santiago Cumplido del Castillo, who takes the stage at Auditorio de la Ribera del Lago in “The Tribute to Farinelli” on November 19. (Counter tenors sing in a typically female soprano range.) 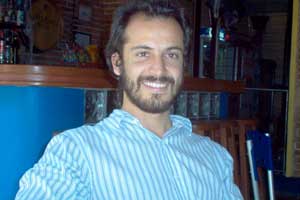 “I had already begun my education as a composer when I saw the film ‘Farinelli, Il Castrato’ 17 years ago. His story and that of the castrati (pre-pubescent boys castrated to preserve their young, high voices) moved me in a way that I cannot explain. Not just the music, but the depth of the man’s soul.”

Though the film makers admit using a fusion of two contemporary voices (male and female) and electronics to produce what they thought the famous singer’s soprano voice would have sounded like, Cumplido was undaunted and began his singing career in earnest.

“As a matter of fact,” says Cumplido, “I’ve become known over the years as not being shy about fusing styles, not just from the Baroque period, but bringing it forward and incorporating trends descended from it.”

Cumplido is pleased to be back home after nearly a decade of performing and studying in Europe – he says he now appreciates the Mexican climate and the more relaxed living style.

And thanks to a recent grant from the State of Jalisco, he plans to bring, through performance and teaching, the essence of Baroque music more into the Mexican musical lexicon.

“Mexico is really still in its infancy about the interpretation of early music. Everyone learns the notes but they haven’t been taught the mental interpretation of the music. Each note isn’t just a note. It’s a note from somewhere going somewhere, with many nuances.”

“She’s beautiful, not in a male or female way, but beautiful like an angel – androgenous, I guess,” Cumplido says.

He’s also excited about the Proyecto de la Musica Infinita Baroque orchestra that will accompany them.

“They are all experienced and talented musicians and they have the bright, balanced and brilliant touch and interior understanding so important to Baroque music.”

The concert will center on the Baroque music of the 18th century, interpreting the greatest works of Vivaldi, Handel, Broschi, Hasse, Porpora and more. The magical arias to be interpreted are the ones heard in the film that filled Cumplido on a visceral or “magic” (his word) level and jump-started his journey as a performer.

Cumplido’s connections at Lakeside run deep. He was the recipient of a grant from the Stan Goldberg Trust nearly ten years ago. Since then, his parents and brother have taken up residency in Ajijic.

Tickets for 300 pesos are on sale at the Lake Chapala Society Monday through Friday from 10 a.m. to noon and at Super Lake Market, Monday through Sunday from 9 a.m. to 8 p.m.