The Orquesta Tipica de Chapala (OTCH) marked the first anniversary of its public debut with a return appearance at the Centro Cultural Gonzalez Gallo Thursday, November 24. 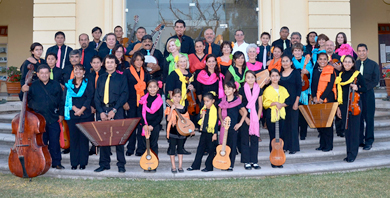 Dedicated to performing a repertoire highlighting the works of Mexican composers, the orchestra is made up of amateur and professional musicians, including children, adolescents and mature adults. In the past 12 months the OTCH has delighted audiences with concerts in Guadalajara for the Fiestas de Octubre and the Pan American Games, as well as at venues in the lakeside region and elsewhere in the state. The group already has several clips posted on You Tube.