Though off to a bit of a rocky start with glitchy light and sound at the beginning of the first scene, Lakeside Little Theatre’s (LLT) “Greetings” played perfectly into the sentimentality of an audience in the throes of the holiday season. 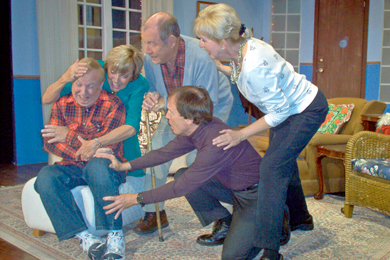 The story, though billed as a comedy, is actually multi-dimensional, dealing with life and death questions, religion versus spirituality, tolerance, reconciliation and, of all things, miracles! The greatest miracle being an ultra modern idea of a celestial entity being channeled with the wisdom of the ages through the mouth of a “retarded” young man.

Director Peggy Lord Chilton did an admirable job with a sound, clean set that actually looked and felt like a place where Middle America might live. Her actors were clear about their roles and turned in praiseworthy performances.

Kevin O’Byrne as the young man flying home to his ultra Catholic family with his big surprise – a Jewish atheist fiancée – really connected with the problems at hand and seldom lost the track of this labyrinthine story. Sally Jo Bartlett as the fiancée in question took a back seat in the stressful family confab, as that character in the position would probably really do. The father of the Gorski family was played by Kenneth Bridges, who claims that he has retired from his life-long career as an actor. He hasn’t. He actually was the beleaguered parent of one wayward (involved with an atheist) and one severely “retarded” (and channeling) son. Amy Friend was completely believable and lovable as the “Edithy” (from “All in the Family”) mother.

This vehicle provided the perfect tour de force for Keith Scott. The way he sustained his character every step of the way as the “retarded” son of the household was the stuff of theatrical awards. To top it off, he played the channeled entity with the same studied intensity. Bravo, Keith!

Congratulations to the director, cast and crew of “Greetings” for a job very well done.

LLT’s next production is “How the Other Half Loves” by Alan Ayckbourn and directed by Dave McIntosh, opening on January 14.