Lakeside Little Theatre (LLT) will roll out the red carpet (a real one) for the opening night of their annual musical production on Saturday, February 25. 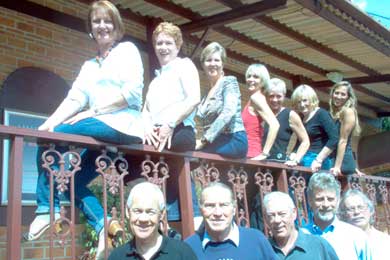 This year, the annual musical offering threads together favorite anecdotes, songs and production numbers from various shows of the Great White Way.

“A Taste of Broadway” was conceived and put together by director Barbara Clippinger (herself a former Broadway dancer). She has been careful to highlight the particular talents and skills of her cast, several of whom are new to the LLT stage.

Songs will include “Wilkommen,” “All That Jazz,” “Give My Regards to Broadway,” “Gotta Get a Gimmick,” “What I did for Love,” “Maybe this Time,” and many more.

The whole ambiance will be about glitz and glamour, so put on your best rhinestone tennis shoes and get ready to mingle. Opening night audience members will be invited back stage after the show to share a complimentary glass of wine with the cast.

Tickets for this production cost 250 pesos and will go on sale on Thursday, Friday and Saturday, February 23, 24 and 25, 10 a.m. and every day during the run of the show (through March 5) until sold out. The box office also opens one hour before the 7:30 p.m. curtain. Season ticket holders who won’t be able to attend need to contact ticket manager Paula McTavish at 766-0954 and leave a message so that empty seats can be filled from the waiting list. Also opening at 6:30 p.m. is the full-service bar on the Angel terrace.

The public will not be allowed to view the dress rehearsal on February 24, as they have previously for other productions.

This “theater about theater” production will surely be the highlight of this season.