The Lake Chapala Society pulled out all the stops for the unveiling and dedication of a new mural depicting the history of the Ajijic children’s art program. 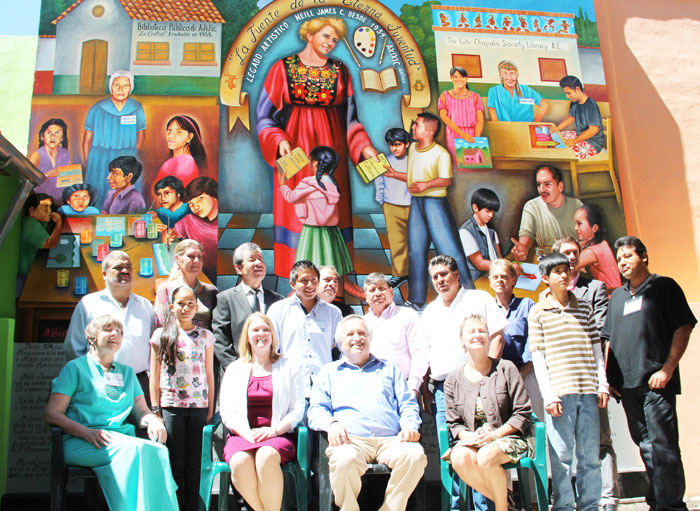 The collaborative work spearheaded by local artists Javier Zaragoza and Jesus Lopez Vega pays tribute to the three outstanding women who devoted their energies to opening the doors to culture and artistic expression for generations of village youngsters.

The mural’s central figure is American writer-philanthropist Neill James as she looked in the mid-1950s when she founded Ajijic’s Biblioteca Publica, one of Mexico’s first public libraries. It operated as a space where children in the then-backwater fishing village could enjoy free access to books and art supplies, things lacking in most of their homes.

Over the past 58 years the program has literally spawned all of the town’s renowned artists, as well as many other prominent native professionals. The cultural spark also helped turn the village into a hub for creative people from all over the globe.

Portrayed on the left side is Angelita Aldana Padilla, the woman James recruited to supervise the Biblioteca’s reading and art activities. She faithfully stood at the helm for three decades. 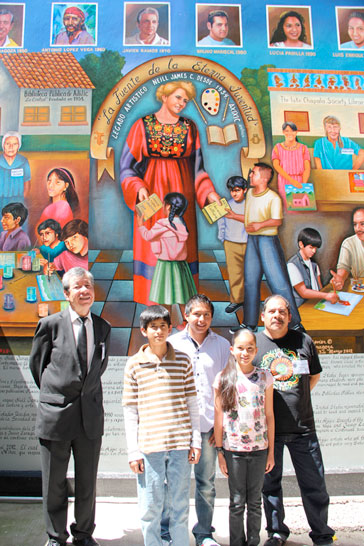 Appearing on the opposite side is Mildred Boyd, the expatriate resident who revived the art program several years after LCS set up headquarters at the James homestead. From 1990 until her death in 2010, she coordinated the Saturday morning workshops that still draw crowds of eager kiddies to the LCS grounds. Below her, Lopez Vega is shown in his current role as an regular instructor.

The mural’s upper border is lined with portraits of six other artists who developed budding talents thanks to the James art initiative. Zaragoza’s hand-lettered legends at the base outline the historical details in Spanish and English.

As a complement to the event, paintings and drawings generated in the children’s art program were exhibited in the LCS gazebo. The decade-by-decade pictorial history includes choice pieces from James’ private collection. Art program supporters are actively seeking angels interested in helping find a permanent home and curator for the entire collection as part of Ajijic’s cultural heritage.