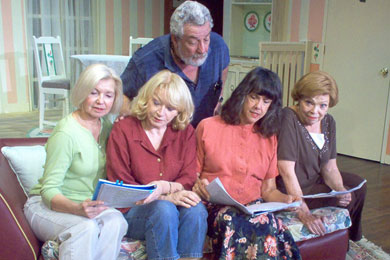 Mrs. Stancliffe, a widow in her 60s (played by Roseann Wilshere), runs a bed and breakfast. Her slightly older next-door neighbor nicknamed “Bud the Stud” (played by Ray Himmelman) loves to woo any likely female guest of the establishment. Mrs. Stancliffe continues to be courted by a retired chemist, Henry (played by Zane Pumiglia) who has invented a blue pill that he hopes will help sexually stimulate women in their post-menopausal years. Mrs. Stancliffe and her lady guests decide to turn the tables on the men (with their own little pills?) The plot thickens and the fun begins.

Other members of the cast include Georgette Richmond, Betty Lloyd Robinson and Candace Luciano.

LLT’s Opening Night is Special program sees the cast join opening night theatergoers after the show for a complimentary glass of wine and theater talk on the Angel Terrace. Friday nights will continue to be dress rehearsal night and not be open to the public.

Tickets are 200 pesos each and go on sale Thursday, Friday and Saturday, April 5, 6 and 7, from 10 a.m. to noon at the theater box office. The box office will also be open at that same time during the run of the show (through Sunday, April 15) one hour before the 7:30 p.m. curtain.

Get to the theater early for the best parking and to spend time meeting and greeting old friends and new at the Angel Terrace full-service bar. Season ticket holders who wish to change their date of attendance should call 766-0954 and leave a message.