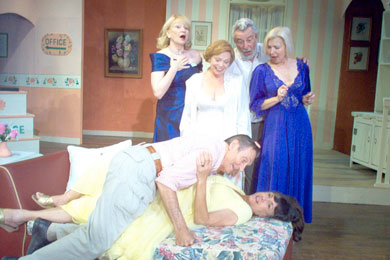 The subject matter, relating to slagging libidos and the blue-pill cures, would not have been unfamiliar to many in the theater’s mature audiences.

The story revolves around a Bed & Breakfast that attracts a clientele of women a little past menopause, who find themselves the easy “marks” for next-door neighbor “Bud the Stud.” The stud maintains his standing as a lothario by consuming large quantities of Viagra. But the women discover his three-timing ways and decide to turn him into “Bud the Dud” by exchanging his Viagra for hormone pills developed to increase sluggish libidos in post-menopausal women. Meanwhile, the proprietress of the B&B, a widow named Mrs. Stancliffe, is being wooed (for the last 20 years) by the man who developed the women’s pills.

Though the play itself is predictable, and the first act rather slow moving, the director and actors are to be congratulated on turning in great performances, keeping the audience entertained, and at times, particularly in the second act, in hysterics.

Ray Himmelman was perfect as the slime-ball over-sexed (with help) lothario and held to the character like glue through the show. Roseann Wilshere did her role as the practical, no-nonsense (until she took her pills) widow with credit and pulled a brilliant quick change in the second act. Georgette Richmond, as romance novel-writer Victoria Ambrose, was wonderfully funny, her performance sprinkled liberally with certain mannerisms common to and well-understood by the “over-sixty” audience. Betty Lloyd Robinson turned in a lively performance as scientist Hillary Hudson and Zane Pumiglia was convincing as the love-struck (for the pretty widow) Henry Mitchell. A real treat and a breath of fresh air was relative newcomer to LLT, Candace Luciano, as the sly, syrupy, southern past-her-prime belle, Charmaine Beauregard. Luciano was handed some of the best lines in the show and she took full advantage of them with her rich delivery.

The cast was well directed by Pat Carroll and his assistant Sally Jo Bartlett, although the play might have benefited from a set not forcing so much of the action, particularly in the first act, to be buried toward the back of the stage.

Make-up was by Maxcine Tate, Julie Mignard and Marilyn Prater.