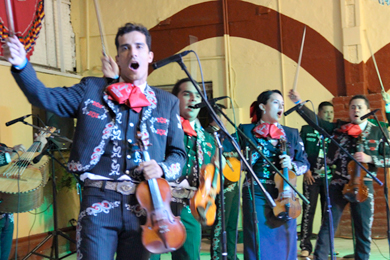 The International Mariachi festival gala concert in Ajijic on September 1 not only pulled in a full house, but also gave the receptive audience a true sense of what the annual musical confab is all about.

With groups from three countries taking the stage, the show underlined the genre’s global appeal as encapsulated in the festival’s 2012 slogan “el mundo entero querrá ser mexicano” (the whole world will want to be Mexican).

Following a warm-up act by local ballet folklorico dancers, the program opened with a set by the Mariachi Tradicional Los Pitayeros. The Guadalajara quintet captured the essence of the foot-thumping, country-style Mexican son, performing in the original mariachi style with voice and string instruments only.

Nuestras Raices from Los Angeles, California stepped up next to exemplify the modern day mariachi sound and a new generation of musicians clinging to ancestral roots. The group is made up of five women and three men, all U.S.-born with family ties in Jalisco and Michoacan.

Band leader and trumpeter Jose Antonio Gonzalez said the group has evolved over the past three years as he has attracted young people keen to experiment with fresh ideas for interpreting Mexican tunes. In their second year at the Guadalajara festival, they are especially excited about the finale when all participants come together for a big mariachi jam session. 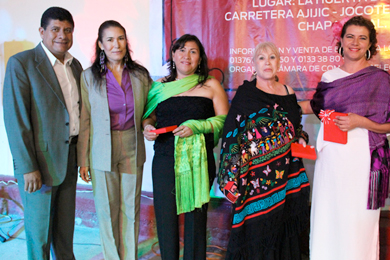 A heavy downpour that let loose just as Nuestras Raices took to the stage did nothing to drown out the group’s bright sound and the potent vocals of Gonzalez’s sister Julieta.

Once the applause for their strong performance died out, the program broke for an informal fashion contest, with more than a dozen ladies from the audience parading across the stage to show off varied styles of hand-loomed rebozo shawls.

Chapala Mayor-elect Joaquin Huerta and his wife Maricela Navarro and Guadalajara Chamber of Commerce Guadalajara vice president Juan Carlos Anguiano and spouse Maria Teresita Bayardo were on hand to score the participants and their garments.

The show hit its peak with a high energy set by the Mariachi Imperial from Cali, Columbia. The group of eight male and two female musicians and dashing lead singer Juan Pablo Marquez rocked the rafters, closing with a couple of hot cumbia tunes that got many spectators to their feet to dance at the foot of the stage.

“Mariachi music is hugely popular in my home country,” Marquez told the Reporter, noting that the capital city of Bogota boasts more than 300 bands dedicated to the genre. Members of his own group manage to make a comfortable living from regular appearances at a Cali restaurant and frequent pick-up gigs for private serenades and social events.

He said the band is having a ball during their first visit to the Guadalajara fest, playing to warm audiences like the one welcoming them to Ajijic and rubbing elbows with fellow musicians from across the globe, including ten other groups from Columbia.

After 19 years of history, the Encuentro del Mariachi is clearly achieving its mission to promote and sustain the genre’s popularity on a worldwide scale.