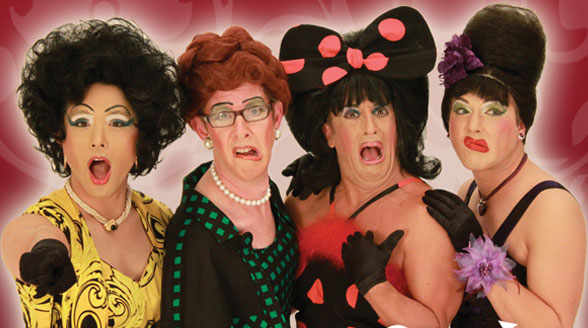 For the last few weekends, Lakesiders have had a chance to see acts not normally offered here. El Piano Rojo is bringing in acts from north- and south-of-the-border that are a bit beyond the normal entertainment fare.

The Kinsey Sicks were spawned in San Francisco in 1993. Combining rich, four-part harmony, biting satire and over-the-top drag, they have performed in 41 states, Mexico, Canada, Europe and Australia. They starred in their own Off-Broadway show at New York’s Studio 54, have released eight albums and are the subjects of two feature films.

They perform at El Piano Rojo January 4, 5 and 6. In their holiday show,

“Oy Vey In A Manger,” we find Rachel, Winnie, Trixie and Trampolina at home in their manger (yes, that manger) facing imminent foreclosure and preparing for one last-ditch effort to unload the dump on unsuspecting buyers. Crises arise, secrets are revealed, Jewish-Gentile tensions surface like bacon fat in matzahball soup, and mayhem ensues, all in glorious four-part harmony.

For three decades acclaimed Canadian singer Joëlle Rabu has wowed audiences with her portrayal of the legendary French chanteuse Edith Piaf.  In her European cabaret-style show “Encore Piaf … and more” she performs songs from the torch-music era with a stage presence described as “passionate, electric and engaging.” Accompanied by award-winning pianist Nico Rhodes, these two musical forces combine theatricality and musicality into an evening of pure entertainment.

Call 766-2876 for more information or reservations.