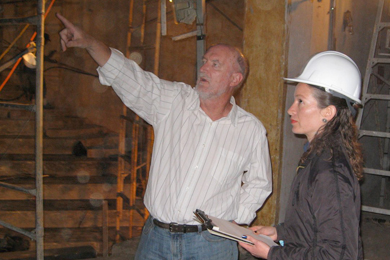 In the midst of its renovation, Ajijic’s landmark auditorium has become a hive of activity.

The interior of the audience hall and stage of the Auditorio de la Ribera del Lago has been totally stripped. The hall ceiling has been removed. Welders are busy assembling the new superstructure over the stage and the brickwork for the new sound-absorbing vestibules at each of the four entrances and exits is in place. The best news is that contractor Javier Rivera is predicting that the project will be completed in early February.

Much of the design project can be credited to Thom Weeks, the chief project architect, who became involved with the project nearly three years ago when he offered his services to the community generated Pro Auditorio Project after his retirement. He spent the summer of 2010 developing a report analyzing the shortcomings and solutions for those at the auditorium. It’s his job now to ensure that the contractor gets the correct design information.

Though many in the Lakeside community have been frustrated and often discouraged by the time it has taken for the project to come to fruition and completion, Weeks says that he has been surprised at how quickly the project actually began after its conception. It took six months to get the promises from the federal and state governments to provide one million pesos each to match funds raised in the community. It took a year to raise those one million pesos. Weeks also has praise for the great interest in the project shown by the key state and municipal officials and their willing assistance and encouragement.

Weeks, who spent much of his career designing public concert halls and related buildings, points out that it can take up to 13 years in Canada and the United States for such a project to be completed, when fund raising and government grants are involved.

He has high praise for professional local architects Alberto Nuñez and Barbara Castro, who have donated their time to the project. Nuñez provided major assistance in preparing the original report in 2010 and Castro has been working with the project for the past year, putting in a lot of volunteer hours supervising the design work of the municipality, who assembled the package of project documents needed for the contract bidding process. The redesign has turned out very well due to the able input of world-class engineer Daniel Ruvalcaba of Leon, Guanajuato.