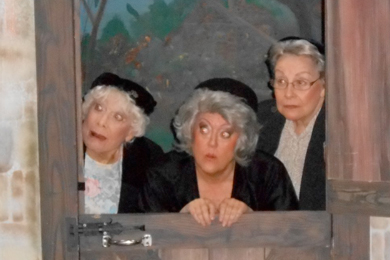 Light, bright, full of chuckles and busy, busy, busy, the Lakeside Little Theatre’s production of “Too Soon for Daisies” held much to attract a typical mature Lakeside audience.

Penned by W. Dinner and W. Morum and directed by Sally Jo Bartlett, the comedy revolves around three elderly women, bored with the restrictions of their “assisted living” home, who simply sail off in a row boat and have the luck to get washed up on shore near a large and what appears to be a deserted house. They settle in about the time that a potential owner shows up, has a heart attack and croaks on the road. Not wanting to be blamed for the man’s death, they bury him under a rockery they build over an abandoned well … and so it goes from one sticky wicket to the next.

The three ladies, well played by Anne Drake, Suzanne Forrest and Phyllis Silverman, managed the plethora of words (and sometimes verse) of the script. Their movements were charming and they had good chemistry with each other, although at times they seemed almost lost in the enormous set … sort of like certain photos before they are cropped.

Jon DeYoung played it suave and cool as the neighborly physician (really with the hots for one of our sweet ladies) and a vivacious Cydney Supan McMinn livened things up with her bouncy, sexy, youth. Douglas Pinkerton as the handyman was highly energetic, although sometimes with a heavy Scottish accent. Kevin Leitch made the most of his role as the policeman. Unfortunately, we saw little beside the hand of Orry Robb as the paper boy. Overall the cast did a great job tackling a wordy and difficult script.

The stage manager was Graham Miller and the production assistant was Beth Leitch. Alex Pinkerton designed and headed the construction crew of Bryan Selesky, David White, Richard Bansbach, Niels Peterson, John Blackmer and Sandy Appelbaum. The set was painted by Chuck Diamond, Patti Glasner, Kathleen Morris, Betsy Shaps and Tony Sikes. Collette Clavadetscher was in charge of props with her team of Margo Eberly, Pam Thompson, Beryel Dorscht and Orry Robb, who also worked as part of the stage crew with Kevin Leitch.

The lighting design and operation was by Pierre Huot, the sound design by Emma Bergh-Apton and operation by Richard Roche. Heika Bennett and Wendy Hamblin were in charge of the wardrobe and Maxcine Tate and the Season 48 crew handled the make-up.

Congratulations and thanks to all who worked so hard to entertain us.

Up next for LLT will be the musical, “The Drowsy Chaperone,” by Bob Martin, Don McKeller, Lisa Lambert and Greg Morrison.” The director will be Dave McIntosh with choreography by Barbara Clippinger and music directed by Judy Hendrick. Performances are set for February 16 to February 26.