Mariachi, Patrimony of Humanity is the theme of a glittering stage spectacle to be presented Sunday, June 30, noon at the Auditorio de la Ribera de Chapala. 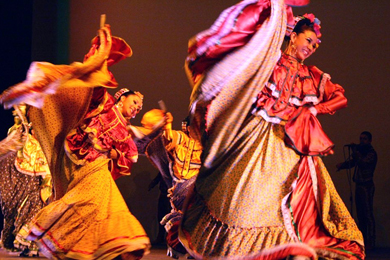 More than a run-of-the-mill ballet folklorico show, the presentation by the state Culture Department’s Sonidos y Movimientos de Mexico troupe will showcase more than 50 performers telling the story of the nation’s cultural history through dance, live music and projections of visual arts. The talented cast includes ballet, neoclassical and folk dancers, as well as a complete mariachi band.

Tickets for the event, priced at 200 pesos per person, are available at the Municipal Archives office at Chapala’s main intersection, the Centro Cultural de Ajijic and Yoli’s Beauty Salon at Plaza Bugambilias, as well as at the auditorium.

Proceeds will be set aside in a special fund to support local cultural projects, including folk dance workshops to be offered in Chapala and its outlying villages that will advance the creation of a new municipal folklorico ballet troupe.

The mariachi dance show was developed by artistic director Roberto Torres Navarro in tribute to the 2011 UNESCO designation of mariachi music as one of the nation’s contributions to intangible cultural heritage of humanity.

Movimientos y Sonidos de Mexico appeared at the 2010 Shanghai World Expo and festivities marking the Independence Bicentennial and Revolution Centennial held in Chicago, Illinois. The group has also performed varied repertoires at the Degollado Theater  and Cabañas Institute in Guadalajara and numerous other venues.