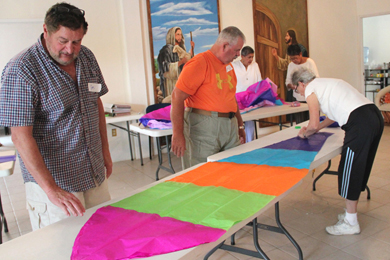 The third annual Globo workshop sponsored by the Lakeside Presbyterian Church roped in a crowd of 20-some expats keen on learning the art of building and flying tissue paper hot-air balloons.

The two-hour sessions held August 27 and 28 were led by Pat and Ralph Courtney. They first mastered the technique under the guidance of seasoned Ajijic globo-maker Ricardo Gonzalez, taking it from there to develop an illustrated step-by-step instruction manual in English. 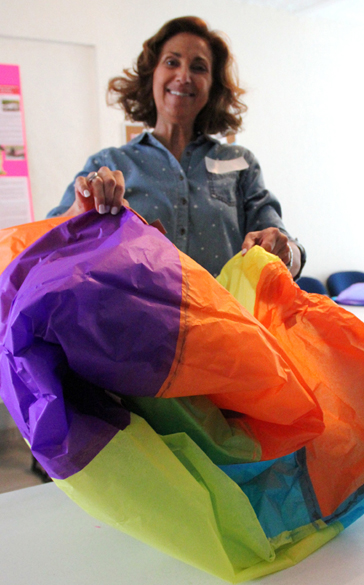 Each basic balloon model takes about 60 to 90 minutes to cut and assemble, using 20 sheets of tissue paper and dabs of white glue. Additional time goes into making cone-shaped wire frames and cloth rings to be soaked in kerosene as components of the globo’s fuel system.

Last year’s event was an especially memorable experience for Betsy Shaps, who had just arrived at lakeside one week earlier. She’s thrilled now at the prospect of switching from the role of awestruck spectator to active flyer.

It will be an even bigger deal for Patti Glasner, who will not only be witnessing the spectacle for the first time, but doing so as an insider. “I was one of the first people to get started here and almost the last to finish,” she mused as she folded up her colorful patchwork balloon. “I’ll be delighted if it just gets off the ground.”

The Regatta is held at the soccer field that borders the highway and Calle Revolucion, just east of Plaza Bugambilias. The action starts around 3 p.m.