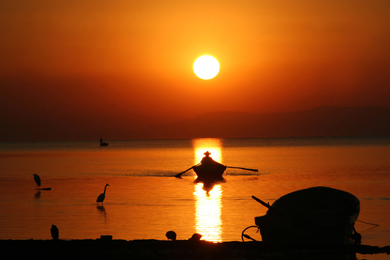 A collection of award-winning images of Lake Chapala by Mexican-American photographer Victor Hugo Casillas Romo will be exhibited across Jalisco next month.

The Jalisco Secretary of Culture is sponsoring the exhibition which will tour the state after the inauguration in Chapala. Casillas told the Reporter this week that he began his collection of photographs of Lake Chapala 15 years ago.

“A lot of these photos have won national and international contests and have been exhibited around the world,” Casillas said.

Born in California, Casillas, 52, grew up in the United States and Mexico before eventually settling for good in Guadalajara. He has worked as a photographer for over 25 years and enjoys photographing Chapala in order to document its beauty but also to raise awareness of problems such as pollution which endanger the lake.

Casillas’ photography has been displayed in around 100 exhibitions and he has won numerous prizes at local, national and worldwide levels. In 2011 he was named “Citizen of the Year” by the Zapopan city council for his extensive work focused on the municipality’s identity.