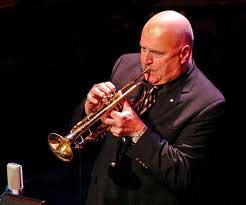 It’s a rare day that lakeside audiences have the opportunity to be entertained by crack musicians such as Guido Basso, the Canadian jazz artist critics acclaim as a brilliant trumpeter and soulful genius on flugelhorn.

That day will come two-fold when Basso arrives to lead the Jazz Greats quartet appearing at January 11 and 12 shows at the Auditorio de la Ribera.

The distinguished horn player will perform with the equally talented Mike Murley on soprano and tenor sax, Reg Schwager on guitar and Steve Wallace on bass. Silky-voiced Molly Johnson is also on the bill as guest vocalist.

True jazz lovers will probably want to catch both the Saturday evening concert, 7:30 p.m., and the Sunday matinee, 2:30 p.m., for a full dose of familiar tunes from the American song book, some untitled blues and perhaps a few hit Latino tunes like “Besame Mucho.” The individual programs weren’t completely firmed up when the Reporter interviewed Basso by phone in late November, but he indicated that – like winter snowflakes – no two jazz performances are ever alike.

He says the group itself is somewhat unique for a jazz band for performing without a percussionist. “Steve Wallace plays the bass with such strength that we get the pulse from him. He walks the bass like boom-boom-boom and you know where the tempo is.”

A Montreal native, Basso began playing trumpet at age nine and quickly became known as a child prodigy.  He says it all started when his older brother started dragging him along for weekly rehearsals with his amateur band. “I was fascinated by the instruments,” he recalls. “Of course being an Italian boy I wanted to be an accordion player. He said ‘pick another one would you.’ So I said trumpet.”

During his youth he was exposed to all kinds of music, especially opera and classical composition. The possibilities for freedom of expression and improvisation attracted him to jazz.

“It’s more difficult than one thinks. You have to be creative within a certain structure and certain chord progressions, and it all has to make sense. It’s impromptu composition in a way and that really appealed to me.”

While gaining renown on Montreal’s club scene during his teens, the young horn player was discovered by singer Vic Damone who took him on the road for a two-year international performance tour. An extended stint with Pearl Bailey and her bandleader husband – famed drummer Louis Bellson – followed.

Basso settled in Toronto in 1960, building a solid career as a studio musician and television performer. Over the years he played in clubs, hotel lounges and live events with his own combos and other bands, performing with virtually all of the country’s top jazz artists as well as big names talents like Buddy Rich and Diana Krall. Today he is a shining star in Canada’s musical firmament.

In 1994 Basso was a named a Member of the Order of Canada, the highest civilian honor granted for outstanding achievement and service to the country or humanity at large. He went on to earn Juno Awards for Traditional Jazz Album of the Year in 2003 and 2004 for the titles Turn Out the Stars and Lost in the Stars.

Basso is eagerly looking forward to his first visit to lakeside. “I can’t wait to pack my bags and be on my way,” he exclaims.

But he is not a total stranger to Mexico. He appeared at the Cervantino Festival a few years ago, playing gigs in Guadalajara and other venues. And what keeps the country especially close to his heart is the sweet memory of meeting his future wife Kristin during a 1973 vacation in Puerto Vallarta. He recalls that a mariachi band contributed significantly to the romanticism of the chance encounter.

Next month the couple will have a chance to relive some of that Mexican magic during an extended stay here as house guests of longtime friend Jan Riley. She is the widow of  Doug Riley, famed founder of Canada’s Dr. Music jazz group, and the person chiefly responsible for lining up the artists who will perform as a benefit for Niños Incapacitados.