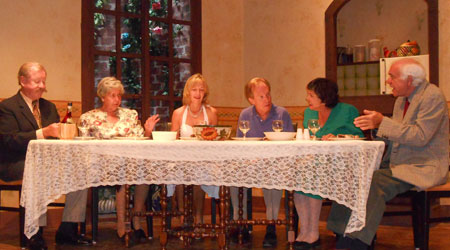 Lakeside Little Theatre’s production of “Over the River and Through the Woods,” written by Joe DiPietro, is a delightful jigsaw of family ties, achievements and values, many pieces of which will be all too familiar to its audiences.

The scene opens to a worried looking Nick Cristano (Kevin O’Byrne) arriving in Hoboken, New Jersey for his weekly visit to his maternal grandparents Aida and Frank Gianelli (Georgette Richmond and Ed Tasca) for Sunday lunch.

In an aside to the audience, he explains that he has been offered a job in Seattle – “That other Washington, near California!” as his paternal grandfather will later remark – and he doesn’t know how to tell his grandparents. His parents have already moved to Florida and his sister’s in California so he’s all too aware of the impact his news will have.

Aida and Frank live in a house Frank built and Nick’s father’s parents Nunzio and Emma Cristano (Kenneth Bridges and Peggy Lord Chilton) live nearby and always join them on Sunday.

The four senior characters each perform a monologue to the audience at various points in the play, which provides more information and background as the story unfolds. The interaction of the entire cast is so believable that long forgotten memories are invoked in members of the audience.

Frank’s constant assertion of “tengo famiglia” is the cornerstone of the family’s values and implies so much more than “I have a family.”  In this context he also means, “I am a man, I have responsibility and a reason to be alive.”

Tasca’s Italian accent is consistently accurate and his diction is excellent – no mean feat when using dialect. His body language too was patently Italian and the mandolin playing was an inspired touch.

As his wife, Georgette gave a very creditable performance as the stereotypical Italian “Mama” who is constantly preoccupied with feeding everyone all the time and won’t take no for an answer.

Lord Chilton’s Emma is cleverly drawn as the scheming matchmaker who introduces Nick to attractive Caitlin O’Hare – effectively played by Heather Hunter – in a desperate attempt to make him fall in love and so change his mind about leaving the east coast.

Bridges’ Nunzio is warm, dry and touching as the grandfather with secrets. He also has some funny lines during the game of “Trivial Pursuits,” The questions were evocative of how some older folk manage to remember people’s names via an ostensibly inconsequential series of self-generated visual clues, that causes much laughter. So too does the statement, “People don’t move away from their families because of the weather.”

Struggling to overcome the grandparents’ influence and fears, O’Byrne plays his role effectively and with great appeal but unfortunately he doesn’t look as if he is of Italian decent. His hair is light and his makeup too pale and it shines in the light. The lighting set-up also casts dark shadows behind actors when downstage right, which was rather distracting.

The open set – designed by Director Ann Swiston and constructed by Richard Bansbach, Steve Dennis, Doug Schmidt, Rob Stupple, and Ian White – was very well thought out and provides a cohesive space for the action that revolves around the kitchen, dining table and sitting area.

The laughter and occasional tears woven through the story-line prove a thoroughly enjoyable bittersweet and tender experience. Aida’s poignant questions at the final curtain still resonate. “How much do you owe someone who cared for you? How much devotion?”