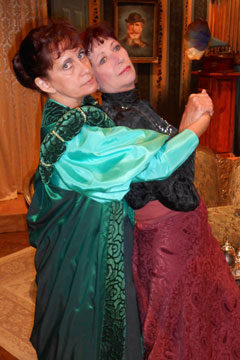 The fourth play of Lakeside Little Theatre’s 49th season is Canadian Governor General’s 1981 Award winner,  ‘Blood Relations’ by Sharon Pollock. Transporting audiences back to Fall River, Massachusetts to examine the events surrounding the trial of Lizzie Borden, it raises the perpetual question — did she or didn’t she?

LLT newcomer, accomplished director Lynn Phelan selected a strong cast of seasoned actors for this complex drama, which involves a character role swap and action that hops between 1902 and 1892 - when the Borden household achieved notoriety.

It’s 1902, ten years after the murders. On stage are Lizzie Borden (Collette Clavadetscher) and, by implication, her lesbian lover the ‘Actress’ (experienced actor and LLT newbie, Debra Bowers) - rumored to have been Nance O’Neill. During their conversation, the question arises as to whether Lizzie killed her father and step-mother . . . “Did you Lizzie? Lizzie, did you?”

Both actors are extremely convincing, but here the confusion begins for many in the audience. The Actress transmogrifies into Lizzie while Lizzie metamorphoses into Bridget the maid, as the pair re-enact events leading up to the murders.

Total blackout. Suddenly, a spotlight reveals the court and the first of many expertly delivered, stony-faced interrogations by the Defense (Fred Koesling). It’s 1892 and he’s questioning Collette, as the witness Bridget, the Irish maid.

When Lizzie’s step-uncle, the lecherous and scheming Harry Wingate — adeptly depicted by Russell Mack — attempts to flirt with Bridget, she knocks him back effectively, to his chagrin.

Emma (Liz White) is nine years older and has taken care of her sister since their mother died. Less hostile than Lizzie towards their step-mother, Mrs. Abigail Borden (Patteye Simpson), the palpable tension between the pair is self-evident.

Dave McIntosh, as Lizzie’s father Andrew Borden, conveys just the right mix of chauvinism, parsimony and cruelty — particularly in act two, when he storms off to behead Lizzie’s beloved pigeons with his axe.

Phelan’s blocking was exemplary, except when philanderer, Dr. Patrick — cleverly portrayed by Greg Clarke in a faultless Irish accent — tries, and fails, to seduce Lizzie. At one point the pair have their backs to the audience to the left of the auditorium as they walk across the apron, stopping outside the single spotlight, which made it difficult to interpret facial expressions.

Simpson’s depiction of Abigail Borden’s anger and exasperation, when that encounter is reported to her, is superb. By contrast, both arguments between Lizzie and Emma are not adversarial enough. On Saturday, White had a few problems with her lines, during what should be a heated rapid-fire dialogue, which slowed the pace and lost impetus. However, she later made a very professional ‘save’, when she caught a falling tablecloth, replaced it, said something about the maid not setting the table properly and smoothly returned to the script.

The play provides no definitive answers except that, contrary to the rhyme, Mrs. Borden received 32 ‘whacks’, while her husband suffered 13. Lizzie walking around with an axe in Act II, implies that she was not as innocent as the jury, which acquitted her in an hour and a half, believed.

According to many audience comments, the character swap and date changes cause enormous confusion.

The family and trial synopses displayed in the terrace cabinets, provide a very useful insight into the entire story, nevertheless, in the absence of a ‘rewind’ button, total concentration is essential throughout.

Regardless, the Director and her entire cast and crew do an impressive job. The Season 49 Make-up Team and Hair Experts Avril Stephenson and Audrey Zikmund excel themselves, Collette and Patteye are hard to recognize, they’re so transformed! Kudos too, to seamstress Johanna Clark for the accurate costumes.

The set was rendered even more impressive by painters: Linda Ball, Alan Bowers, Margo Eberly, Elizabeth Reinheimer and Rob Stupple, and by Props Mistress, Karen Maser. Stage Manager is Margo Eberly, and Win McIntosh the Production Assistant. Lighting Designer and Operator is Shellie Checkoway who is also a Lighting Technician, as were Neal Checkoway, Alan Bowers and Pierre Huot. Jim Jack is Sound Designer and Technician while the Sound Operator is Hallie Shepherd.