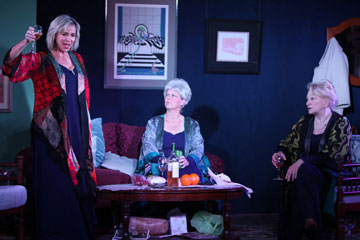 Theater-lovers are in for a special treat with My, My, How Nice Productions’ presentation of Ivan Menchell’s 1990 comedy, “The Cemetery Club.”

Completely belying its misleadingly depressing title, the show is thickly laden with quick-witted and perfectly timed Jewish humor such that the audience’s laughter is irrepressible throughout.

Director Bernadette Jones is a newcomer to Lakeside. A professional director of over 30 theater productions, she was the founder and artistic director of Theatreworks Productions that still continues in Toronto under new leadership.

The story follows the lives of three Jewish widows living in Forest Hills, New York, Ida (Roseann Wilshere), Lucille (Diana Rowland) and Doris (Jayme Littlejohn), as they visit the graves of their husbands each month. Every time they exchange news and discuss how things are going. Without giving too much away, the plot revolves around an ongoing debate as, four years on, they try to decide if they are content, or whether and how they should move forward with their lives.

The main characters are expertly and sensitively portrayed by three of Ajijic’s finest actors. Littlejohn has Doris to perfection. Easily offended and stuck in the past, she’s fussy, preoccupied with tending her husband’s grave and scandalized by Lucille’s flirtatious behavior.

Lucille is attractive and knows it. She’s fashionable and hates Doris’ consistent ability to accurately guess what she paid for a second-hand designer item. Lucille seems to have moved on and relates details of her conquests, which shock her friends. Her character is comprised of many facets, that Rowland plays to maximum effect, transitioning easily between them. At one point, she is so convincing that the entire audience  . . .  ah, but that would spoil the plot!

Ida is beginning to realize that there may be more to life than looking back. She is surprised to feel her reciprocal interest in the local butcher Sam (Mark Bennett), whom she meets when he visits his wife’s grave.  She starts to wonder whether it may be time for “the next chapter,” as Sam calls it. Wilshere convincingly takes Ida through a complex and beautifully enacted rollercoaster of emotions from sadness, then awakening interest in Sam, to jealousy and bitter anger at the betrayal by her friends. Accurately depicting the typical lone male faced with a gaggle of females, Bennett adeptly switches between confidence one minute and bewilderment the next.

Candace Luciano is perfect as Mildred, the cute and gorgeous southern belle who briefly catches Sam’s eye and makes Ida jealous by accompanying him to their friend Selma’s umpteenth wedding.

The three widow’s foray as bridesmaids – and their subsequent return home – has the audience roaring with laughter as the story carries us effortlessly towards its surprising conclusion.

The set representing Ida’s living room and a corner of the cemetery, designed by Director Bernadette Jones and her husband Alan Marsh, is perfect for purpose and works well – no easy task in such an uncompromising space. Its construction was by Russell Mack, Richard Bansbach, Steve Dennis, Rob Stupple and Alan Bowers. Set decoration was by Linzy Roberts and Marsha McCarthy – the latter’s pottery skills being responsible for the realistic grave ornaments. Sound and light design and operation by Bill Vincent and Kitt Rudeen. The stage managers were Diane Jones and Gale Bildfell.

The script and entire production is exceptional, from start to finish.

The show runs February 6, 7, 8, 14 and 15 at 7:30 p.m., and February 9 and 13 at 3 p.m. at the old Sol y Luna on Rio Bravo 10A, Ajijic. February 9 is already sold out, so hurry and get your tickets now. Tickets are 200 pesos on sale at Mia’s Boutique and Diane Pearl Colecciones or by emailing This email address is being protected from spambots. You need JavaScript enabled to view it..