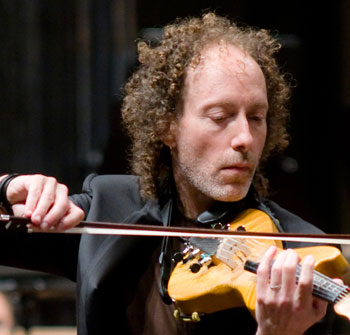 Our preview of the 12th annual Scotiabank Northern Lights Music Festival now turns to the second week, which will feature the usual range of exceptional music.

This time, however, the festival provides patrons with the opportunity to experience masterworks being played on two unusual and rare instruments – a six-string electric violin played by its inventor and an extremely valuable, 300-year-old Italian cello.

On Sunday February 23, at the Auditorio, Lakeside’s first taste of the electric violin, “Tracy Silverman, Solo,” should be a very novel and exciting event.

Tracy Silverman graduated from Juilliard in 1980. Shortly afterwards he designed and built the first six-string violin, becoming a music pioneer with an instrument that hitherto did not exist. He suggests that his “voice” as an electric violinist originated from his interest in non-classical music such as rock, jazz and music from Brazil, Africa and India.

Silverman says that he discovered a new method of string playing when developing the instrument. “The additional two lower strings open up a door, not just to an additional lower register but also, surprisingly, to a new approach to using the bow. The possibility of playing the violin as a chordal instrument like the guitar forced me to imagine a more rhythmic way of using the bow which I call ‘Strum Bowing’.”

Universally lauded by newspapers and reviewers too numerous to mention, BBC Radio summed him up as, “the greatest living exponent of the electric violin.” He has worked with the world’s top symphony orchestras, rock bands and jazz legends during a multifaceted career.

It is generally agreed that the instrument was fully legitimized by Pulitzer Prize-winning composer John Adam’s electric violin concerto, “The Dharma at Big Sur,” which Silverman has played all over the world.  He’s also in great demand as a composer and recording artist. He has an extensive catalogue of recorded work, makes multiple TV and radio appearances and enjoys teaching jazz violin and composition in the United States. 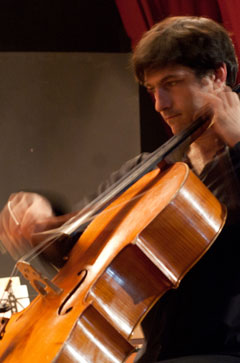 On Saturday March 1, the bittersweet end to the festival, the Closing Gala in the Auditorio will include Gustav Holst’s Fugal Concerto, with Susan Hoeppner on flute and violinist Mary-Beth Brown. It will also feature Ariel Barnes performing Haydn’s “Cello Concerto in D Major.”

Intriguingly, the instrument being played is a Newland Joannes Franciscus Celoniatus cello built in Turin, Italy in 1730. As the winner of the 2012 Canada Council Instrument Bank Competition, Barnes was awarded the use of this extremely valuable antique, for the next three years and he’s bringing it with him. It will even have its own, expensive, seat on the aircraft.

In January 2013, Barnes was appointed Principal Cello of the Vancouver Symphony Orchestra.  A gifted and universally acclaimed musician, Barnes is known for his imaginative interpretations of a wide range of styles from Baroque to contemporary music. A soloist and chamber player, he regularly performs live concerts broadcast on CBC Radio and has several recording projects in the works.

Festival Artistic Director Chris Wilshere recently announced some sad news. Viola player Molly Carr, who was to have joined this year’s festival and played in Schubert’s “The Trout” quintet, and other works, has experienced every musician’s nightmare. While she was in Israel last month, she broke a glass bowl in her left hand. As a result she is presently unable to participate in, or come to, the festival because she is still undergoing surgeries. Wilshere expressed his best wishes for Carr’s speedy recovery.

Yumi Oshima kindly agreed to step in at the last minute.  She began to learn the violin at age four and was one of the youngest students to be admitted to the Juilliard Pre-College division, at age seven. She earned her bachelor’s degree in Nuclear Engineering at MIT, where she minored in music, studying composition with John Harbison.

Oshima made the transition from violin to viola five years ago, because she felt it has a great role in chamber music and a deeper tone than the violin.

She has performed at Carnegie Hall, throughout the United States, Europe and Japan, also playing in the ensembles and full orchestra of New Jersey’s Bravura Philharmonic.  Currently finishing her doctorate in viola performance at Rutgers University, Oshima is serving as assistant principal violist of Symphony in C.