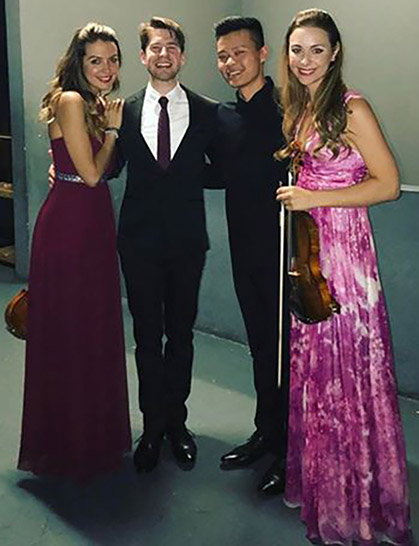 From Quartetto Gelato with their Italianate sound, violin wiz Peter Desotto and his fabulous tenor voice to Richard Underhill and his famous Jazz Band. If there were ever a group of musicians that could make anyone feel at home with classical music it is the Northern Lights musicians, each year carefully chosen for our entertainment by Christopher Wilshere, artistic director of the festival.

The Valentine’s Day concert by David Fung had the audience on its feet twice, once at intermission and again at the end. After playing the most beautiful Mozart Piano Sonata No. 3 in B-Flat Major K 281, Fung collaborated with New York violist Luke Fleming in Shumann’s “Märchenbilder.” The viola is not often considered a solo instrument but the way Fleming wields his oversized one, the tones emanated clear and pure. Then surprising us, Sarah McElravy played the enchanting “Lark Ascending” by Ralph Vaughan Williams, one was transported to another world. After intermission Fung really revealed why he is now considered a superstar. He played Franz Schubert’s Fantasie in C Major (Wanderer Fantasy). The audience gave two standing ovations, one at intermission and another at the end of the concert. If you pick up this newspaper in time, you could catch him at the final concert on Friday, February 24, which is always one of the highlights of the festival; he will be playing the Beethoven Piano Concerto No. 2 in B-flat Major Op. 19 with the entire Festival Orchestra at the Auditorio de la Ribera in La Floresta at 7:30 p.m.

Richard Underhill’s jazz concert featured the lovely Patricia O’Callaghan. Her sexy rendition of famous old jazz standards had the audience rocking the Auditorio. Saturday night the crowd was blown away by Ariel Barnes playing the wonderful Haydn Cello Concerto #1 in C major at the Gala Orchestra. Afterwards, patrons and musicians all headed off to a big reception at the Wilshere’s home where they were entertained by the jazz band and fed champagne and hors d’oeuvres.

Moonshine Ballads and Other Charms was a delight at the Auditorio. The audience were the first to hear the new album of the Gryphon Trio with Patricia O’Callaghan. Her smooth silky voice charmed us and, backed up by one of the world’s most renowned piano trios, how could this concert lose.

The Salon Series, a series of three in-home chamber concerts, were a special indulgence. Susan Hoeppner played her magical flute at the home of Roseann and Tony Wilshere for a small audience. It is such a pleasure to have the chance to get up close to hear these musicians in a home the way chamber music was intended to be played. Daniel Moody’s concert was at the Bravo Theatre. The acoustics were wonderful and the audience small again so it could be up close. The Archduke at the Villa Wolf was still coming up at the time of publication but all were looking forward to that concert. The Gryphon Trio are renowned and a chance to see and hear them up close is an opportunity.

The last of the main Festival Series will be at the Auditorio de la Ribera on Friday night at 7:30 p.m. and on Saturday they will have the final jazz event at the Nueva Posada which is already sold out. All in, this year’s festival has been an exciting success and everyone involved is exhausted with fun.

Tickets to the final concert on Friday are available at the Auditorio an hour before and online by writing This email address is being protected from spambots. You need JavaScript enabled to view it. or calling Maureen Welch at 108-1407.  More information is available at www.festivaldefebrero.com.