Recent mass shootings in the United States prompted the issuance of a series of travel advisories for foreigners considering travel to that country. 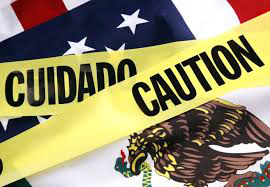 Warnings from Uruguay and Venezuela may be chalked up to political motives, but the one put out a couple of weeks ago by Amnesty International put icing on the cake. The text reads in part:

“If you decide to travel to the United States: Be extra vigilant at all times and be wary of the ubiquity of firearms among the population. Avoid places where large numbers of people gather, especially cultural events, places of worship, schools, and shopping malls. Exercise increased caution when visiting local bars, nightclubs and casinos.”

About time! I’ve wondered for years, as killing sprees have happened again and again, why Mexico hasn’t done exactly the same. It would be justified and a sort of payback for the frequent and increasingly harsh Mexico travel advisories coming out of the U.S. State Department.

Without downplaying rampant gun violence that plagues this country, there’s huge difference between what happens here and blood baths north of the border. For starters, firearm sales to civilians are strictly controlled, helping keep weapons of mass destruction out of the hands rogue madmen.

I admit that I was rattled by the gun battle that took place a month ago at a fast-food joint in Zapopan where I have chowed down burgers from time to time. Several customers were injured in the crossfire as two hit-men were slain by adversaries. But by in large, shopping centers and public places in the metro area are fairly safe environments for the average citizen.

Likewise, here at lakeside. Homicide victims (whether nationals or foreigners) are nearly always specifically targeted by murderers with an axe to grind. Others needn’t worry much about getting in the way of stray bullets

It’s worth noting that Lake Chapala’s north shore corridor is invariably excluded from Mexico travel advisories released by the U.S. government. That’s not to say that the area is free of certain perils.

For example, residents are in daily danger of getting caught up in frustrating traffic jams on the main highway. They are at risk of suffering skin damage from too much sunshine. At worst, the rainy season may subject folks to emergencies of leaking roofs, occasional flooding and fallen trees.

Many face decision-making crises when picking which of the community’s numerous eateries will best suit for dining out on a given day. With so many civic organizations, cultural events, social happenings and traditional fiestas keeping us busy, we are in constant threat of overloading our engagement calendars, having too much to do and not enough downtime in the presumably relaxed Promised Land of  Eternal Mañana.

In short, if too much good living counts as menace, consider yourself forewarned.