September, Mexico’s mes patrio, is upon us. It’s the month the nation celebrates Independence Day and other dates of patriotic pride. 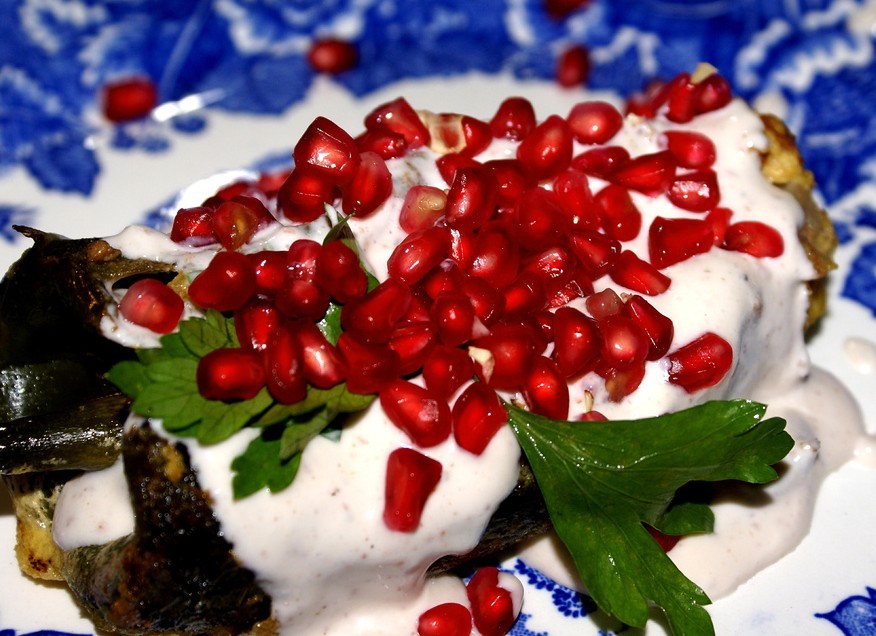 Street vendors pop up all over the place, hawking flags and trinkets that put folks in the mood. In a country distinguished for its extraordinary cuisine, I’m inclined to get into the spirit of things through my taste buds.

Among a wide array of culinary classics, nothing better shouts out ¡Viva México! than chiles en nogada, the emblematic seasonal dish. Steeped in history, this festive palate-pleaser stands out for an exotic blend of flavors brought together in perfect symphony.

A quantum leap above the commonplace stuffed pepper, the chile en nogada is concocted with a long list of ingredients, as many as 40 in the most complex recipes. Though chefs may follow distinct formulas and methods, all stick with common elements: green poblano chiles filled with a rich mixture of protein and fruits, topped with a luscious walnut-laced white cream sauce, and garnished with pomegranate seeds and parsley leaves.

This baroque platter originated in Puebla, a city renowned for gastronomic traditions that evolved in the kitchens of local convents during the colonial era. Clever nuns had a knack for inventing heavenly recipes with a synthesis of endemic and European ingredients and cooking styles.

According to legend, the chile en nogada was created to honor General Agustín de Iturbide who arrived in Puebla on August 28, 1821, just days after signing the treaty that brought an end to the ten-year independence struggle. Augustine sisters whipped up a divine stuffed pepper as the centerpiece of a feast served to the new nation’s war hero and self-proclaimed emperor on the date coinciding with his saint’s day.

Iturbide allegedly devoured several helpings with considerable relish. He was taken not only by the exquisite flavor, but also the color scheme that symbolized both his army’s fighting standard and the three guarantees spelled out in the Plan de Iguala as fundamental principles of independent Mexico.

Some call for serving the chiles simply peeled and plain, others prefer them battered and fried. Milk, heavy cream, queso fresco or cream cheese may be mixed into the walnut sauce. Chopping versus grinding the meat, choice of cooking fats, and the sweetness factor are other variables.

With chiles en nogada now appearing on restaurant menus nationwide, Puebla is the obvious go-to place to sample the dish, but it is also featured at many local eateries.