Anybody who’s been driving the Chapala-Ajijic-Jocotepec corridor lately can verify it’s a jungle out there. The poor state of streets and roadways, aggravated by the on-going “improvements” of the ciclovía, make for perilous travel for cyclists, pedestrians and motorists alike.

I’m inclined to disagree with Chapala’s Transito Director who stated that the road conditions and construction work have not been causative factors in a recent rash of wrecks. I’ll withhold an opinion on the wisdom of cicolvia upgrade until it’s finished, guarding optimism that it will turn out for the good of those who survive the current dangers and inconveniences.

There is light at the end of the tunnel. The bike path and sidewalk work crews are proceeding at a rapid pace and highway resurfacing is well underway in the stretch between Jocotepec and Ajijic.

In the meantime, it seems that the Día de Amor y Amistad is an appropriate time to advocate for some driver attitude adjustment. It does no good to curse and gripe about the projects and their hazards. Instead, everyone can gain by exercising extreme precautions and courteous practices.

In a chat with Transito’s newly instated second-in-command Alejandro Ibarra, he observed that the local populace is extremely weak in cultura vial, loosely translated as understanding and applying common sense rules of the road. 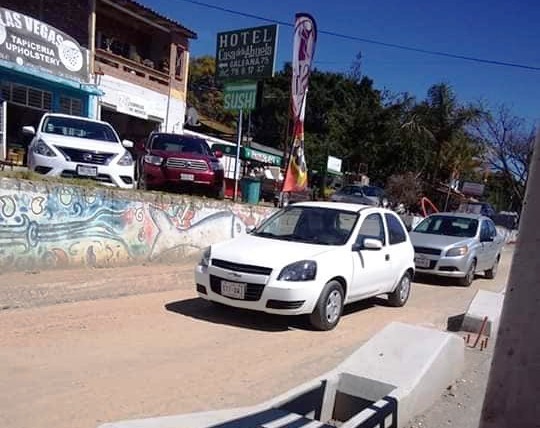 For starters, drivers would do well to travel at a reasonable speed, slow enough to safely navigate potholes and obstructions that pop up along the way, but not at a snail’s pace that frustrates motorists following behind who might be tempted to resort to reckless passing.

Keep a close eye on rearview mirrors to avoid crashing into motorcyclists weaving in and out of traffic at breakneck speeds. And avoid sudden breaking that is a common cause of fender benders.

Slipping into the flow of traffic can be a huge challenge at major points of congestion. In the spirit of kindness, when you find yourself at a dead stop, why not leave a space for other drivers trying to get on the road, especially at busy intersections? Or pause to let pedestrians scoot across the way.

Parking around here is a premium these days. What really gets my goat are the thoughtless road hogs who pull into scarce spaces leaving a half-car gaps in front, behind, or on either side of their vehicles. Others squeeze in tight corners or fail to pull in close to the curb along narrow village streets, with no consideration for drivers needing to turn or pass by at those points.

Elderly folks whose eyesight, hearing or reflexes are seriously impaired should consider giving up driving altogether. Taxi and executive drivers can take them where they want to go without endangering others. The same goes for drivers hampered by consuming booze or certain meds.

Ibarra mentioned that some foreigners seem to get behind the wheel thinking they can ignore official regulations and do as they please because “this is Mexico,”  as if it were a lawless no-man’s land. I suspect he’s right and bet they’re the kind who fuss and fume when they get busted for violations.