This column was first published in the April 9, 1988 edition of this newspaper.

Just behind the high ochre ridge that slices the northern horizon at the west end of Lake Chapala lie two small villages, the remnants of a once vast hacienda.

The smaller of these two pueblos, Las Trojes (The Barns), traditionally has been considered by the residents of Ajijic and Jocotepec as a pueblo triste (a sad town). Just before the rains in the summer of 1972, I made a lengthy visit to the village. The pueblo was the color of adobe, sitting silently baking among stony fields fingered by abrupt dust devils, watched from above by red-tailed hawks drifting on invisible streams as they made their lethal morning observations. In the barrancas cutting burgundy shadows in the mountain flanks toward Ajijic, cordoniz (quail) sent up a rising call.

Strangers in remote pueblos everywhere are instant objects of curiosity, and as I rode into the beginning street of Las Trojes, people paused to stare. Soon three children were trotting alongside my horse, examining me with such intensity my grin gave way to laughter which made my young escorts laugh too. The calles of Las Trojes were, of course, paved with stone block and were cleaner than those of lakeside towns. They appeared wider, and seemed more friendly because of this width. This impression, I realized, came from the fact that there were no cars in Las Trojes to cramp the street’s edges. 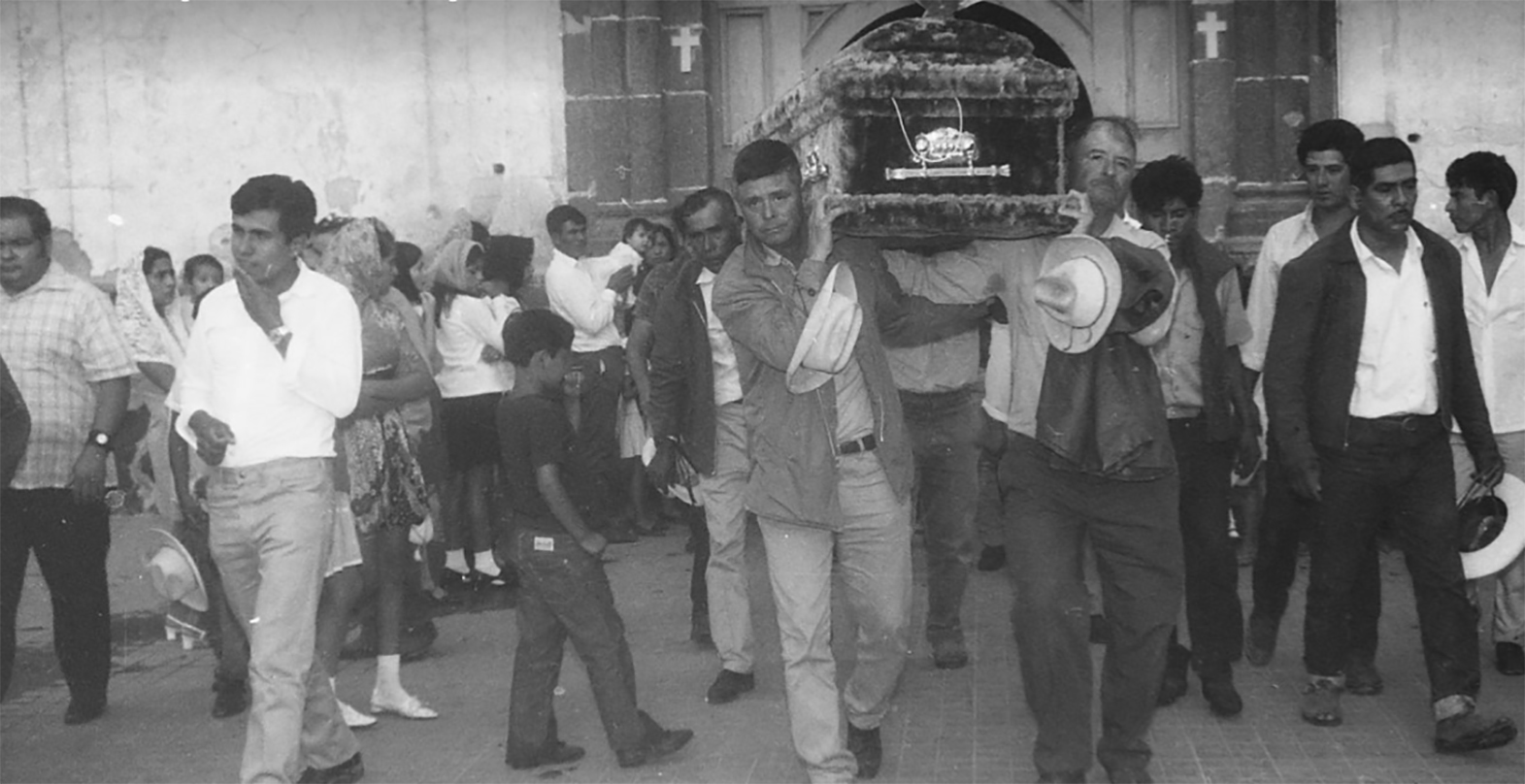 I stopped at the home of Fulgencio Amézquita, guided to it by my small, avid audience.  (“It’s that house there by the nopales, señor.”) “Gencio” and I had met in Ajijic at the saint’s day fiesta of the daughter of a mutual friend.  Both Trojes and its sister village, Potrerillos (Little Fields), are very much lakeside towns in that their populations have for so many years psychologically “faced” the lake. That is, their inhabitants have been traveling to Jocotepec and Ajijic and to Chapala for longer than anyone can remember for supplies, doctors, transportation, fiestas, romance and curiosity’s sake. So one often met citizens of these two hill towns in the streets of nearby lakeside pueblos, looking quite pleased with themselves for being able to manage the clangor of so many cars and strangers and enticements without panic, and could, when the novelty of this experience wore off, return to their stony fields and baking villages generally none the worse for wear.

Gencio was not at home, but Señora Amézquita was, and though we had never met, she invited me to enjoy the shade of the garden’s guamuchil tree and a fiery thimbleful of alcohol chased by sweet black coffee. Señora Amézquita was 63, her gray hair was cut short and she wore thick-lensed glasses she didn’t like very much. After a leisurely exchange of social courtesies, she mentioned that a child had just drowned that week in her well. We stepped from the shade to look down the crumbling earthen side of the open pozo. It was deep.

A frayed rope hung from an ancient malecate into the dark pit.

“Everyone here has a well like this,” the señora said.

“All the children know about them.” She shook her head at the bad luck, fate, destiny, hex or whatever it was that had thrown the child into the pozo. “She was there all night before we found her,” she said with a long sigh. “That’s where Fulgencio is now, with the others making the luto (funeral). They’re going to take the child to Potrerillos to bury.”

Two streets away, a group of pedestrians and a larger number of horsemen (plus my three former guides) had gathered around a small, simple coffin and were setting out for Potrerillos at a somber gait. Thick-backed and bent-legged, Fulgencio walked near the front, his hat off and his white, trimmed hair glaring in the hard sun. Close by, four men carried the gray coffin on their shoulders. It was a Sunday and the priest from Zapotitan (called “Zapote” here) would be coming in by truck to say mass at the chapel of the old hacienda in Potrerillos.

The funeral procession stepped with measured cadence down the dipping dirt road, past freshly seeded fields waiting for rain, forded a thin stream, then strung out going up the grade to Little Fields. From the back they looked like a scene blown into real life from some romantic film, perhaps Brando’s “Viva Zapata” – a flim, because few city-formed moderns have actually seen a band of horsemen wearing sombreros, machetes and pistols moving across a landscape where not a single thing identified the time or the people as part of the 20th Century. The procession gave the extraordinary impression of great solemnity and startling dislocation.

The succession of hacendados who once owned the land as far as one can see here lived in the hacienda’s “main house” at Potrerillos. The hacienda had been in ruins for years; only the chapel and a few low rooms of one side still stood. The chapel served as the church for both villages and over the years had received a lot of needed repair. But a recent tremor had knocked the ceiling off the chapel’s entrance, and reinforcing rods dangled precariously above the entering congregation.

To get a view of all this and to test my growing sense of dislocation, I rode down an alleyway and trotted ahead. The procession had an heroic appearance, marching like a band of brave-faced warriors carrying one of their fallen to a resting place. (Movies train us in these things in certain ways so early and so deeply, that we have difficulty learning from the real thing.) Children staring at the coffin, giggling at friends in doorways, followed at the side along with a few dogs and for a moment or two, a couple of goats. Spur rowels and machetes chinked, saddles and holsters creaked, and the hoofs and sandaled feet stepped almost silently.

There was a raw sadness to the scene, certainly. Yet there was something more to it than just sorrow. There was the unavoidable image of this procession making its way across broad patches of history, splicing time together with its simplicity, its unintimidated durability, with the elementary drama of its determination to survive, to continue – if nothing else – the rituals of faith and grief, hope and renewal.