This week, theological scholar Dr. Diana Butler Bass explained the connection between Donald Trump’s recognition of Jerusalem by evangelical Christians and the “apocalypse.”

It appears that Israel will be “rebuilding the Temple,” an event that will spark the “End Times.”

Says Bass: “Of all the possible theological dog-whistles to his evangelical base, this is the biggest … Trump is reminding them that he is carrying out God’s will to these Last Days ... at which time Jesus Christ will return to Earth and vanquish all God’s enemies.”

The End Days will be 1,000 years of chaos before everyone goes to Judgment and has to answer for everything, including that one night in the motel (you know the one I’m talking about!). Now, I for one thought we’ve endured a millennium of chaos just this year, thanks to Trump. But things really have become remarkably crazy lately, with perverse weather conditions, powerful viruses that can punch through microscope slides, starvation and obesity (sometimes in the same family), and a rash of sexual encounters that according to the accused never happened (the Almighty again?). 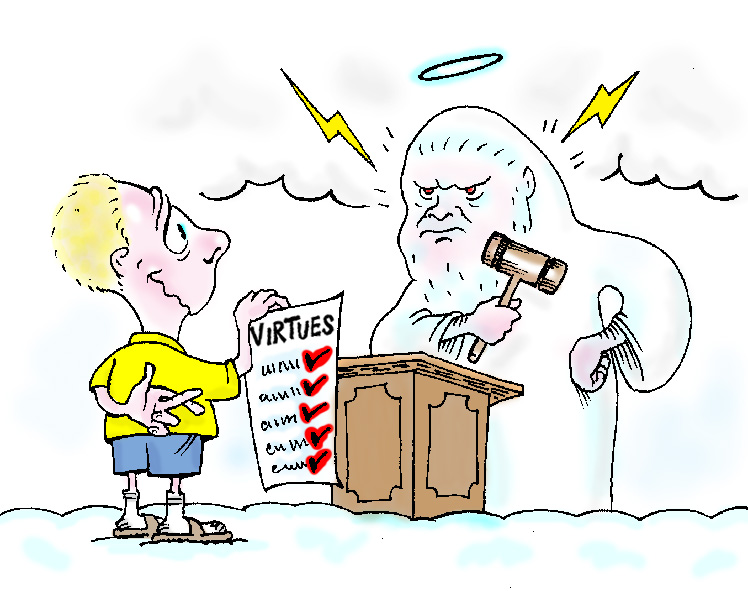 Consider a quiet afternoon during the earth’s beloved Jurassic Period. Everything’s coming up algae and fungus; you can hear the gentle rumble of a brachiosaur herd leaping down on an unsuspecting iguanodon, and the pterydactyls have just returned from wintering in Portugal. It’s a paradise of thriving super-biomass.

And then all of a sudden! Lights go out! Pow! Everything goes to black! The whole world is changed just like that. In a single flash, a wandering meteor the size of Camden, New Jersey (and just as culturally advanced) plowed into the Yucatan peninsula, instantly devaluing the peso and igniting a holocaust that made it possible for mammals to walk upright and, laughingly, start calling themselves homo sapiens.

I believe that today’s so-called civilized world and all our accumulated knowledge could also be wiped out just like that (including quantum physics and how to make a good four-cheese lasagna). All that will be left would be a bunch of lemurs and seagulls sitting on top of our nuclear silos, trying to figure out what the hell humans thought they were doing. And we humans? We’ll all be trying to escape on evacuation routes we never built, which will, as a result, take us to one place only – that blessed Final Reckoning (I’m not talking about the Super Bowl).

Here are some guidelines on how to prepare yourself for your coming Judgment Day hearing:

1. Dig up those tax receipts for “Save the Planet,” “Save the Animals” (whatever it is you tried in vain to save, bring your documentation.) The receipts are solid evidence that you cared about something other than where to get the best tequila shooters.

2. Despite any rumors you may have heard, it won’t look good to show up in sandals (especially if you’re wearing socks).

3. Explain your life and actions in a simple creed or philosophy, 25 words or less. Do not bring musical accompaniment.

4. Take full responsibility for all your actions and, under no circumstances, try to blame them on the fact that you grew up in Philly.

6. Bring a record of your prescription drugs to prove your marriage and your children drove you to pharmacological balms to get through the day.

7. Don’t try to jump the queue claiming, “I have nothing to declare.”

8. Finally, don’t get into a heresiological argument with the Divine over the relative nature of scriptural morality and gnostic libertinism. He hates when he has to explain that stuff over and over again.