Over the past several months, just about everyone I know came down with what everybody loves to call a “stomach flu.” Well, this condition is sometimes as confusing to doctors as it is to victims.

And it often takes several visits to the doctor to get a correct diagnosis.

Here’s why: first, it’s not a flu. Second, it’s not in your stomach. Third, its not a short-term gush of “amoebas” you can kill off with tequila. And fourth, its symptoms are common with a dozen other GI disorders. So the whole business is more confusing than a roundabout in Guadalajara.

As soon as the discomfort starts and people ask you why your face is comic-book blue, it’s generally gastroenteritis, a viral infection that is a cousin to the flu virus under the microscope, but one can get them confused once in your gut. The symptoms of acute gastroenteritis are similar to food poisoning, so one must be careful. If food poisoning is suspected, symptoms tend to occur within hours of eating something (vomiting, diarrhea, abdominal discomfort and fever).  Gastroenteritis virus can show up two or three days later like a microbe cartel: “Hey, we’re taking over your small intestine, loser.” 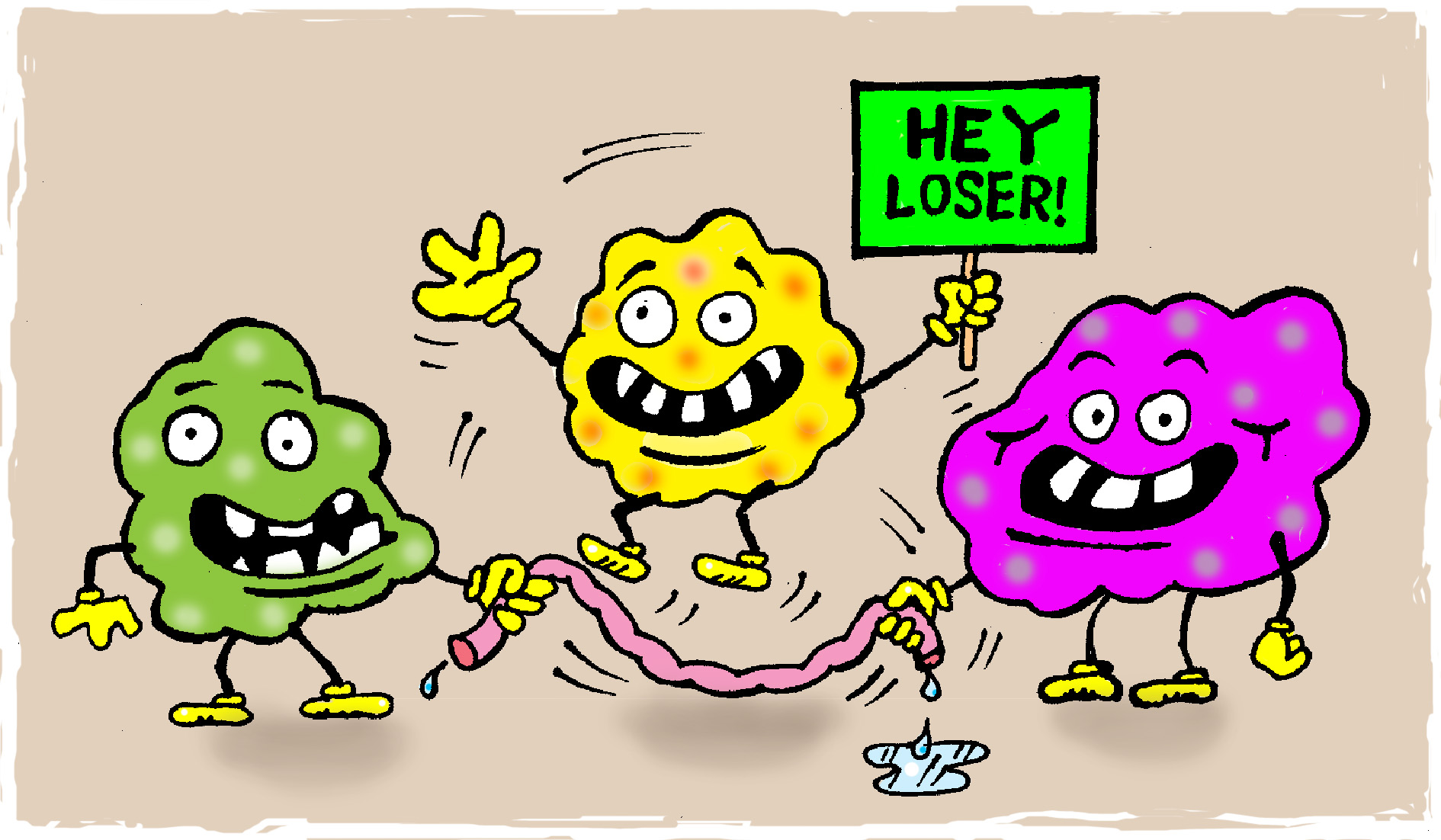 In the case of gastroenteritis, a short answer for solving this diagnosis mystery includes these generally accepted facts:

1. Gastroenteritis symptoms usually last for one to two days and rarely includes fever. It will often disappear on its own with simple treatments like regular hydration and in-home rest.

3. To reduce symptoms, limit your diet to liquids and soups. I think this could be the beginning of a wonderful new diet craze. The “Gastro Diet.” Make sure drinking water is purified.

5. The bacteria causing the condition is “bad flora,” like garden weeds. Help replace the bad flora with good by trying probiotics or probiotic drinks. Probiotics are also helpful in preventing the return of the disease.

6. The condition can be contagious, and can be transmitted airborne.

7. Poor kitchen hygiene is one of the ways this bacteria gets into your food. Avoid street food. Vendors try their best at hygiene, but studies clearly show that food prepared along with foot traffic and low temperatures encourage microbes.

8. You can also pick it up by an infected individual who has sneezed on the table you’re dining at or on the doorknob you just handled (how one sneezes on a doorknob I don’t know, but it’s a common hazard I’m told).

9. And don’t shake anybody’s hand or you can share more than just a friendship. One of the greatest medical advances of this century has been the “fist-bump.” Not something you’d do if you met the queen, but then she’s the queen and she probably washes her hands.

One good thing? It’s now okay to be a flaming hypochondriac. And washing your hands as often as it may occur to you is no longer a sign of OCD. Carrying a small bottle of anti-bacterial spray and spraying it every time somebody touches you can lose you friends, but you’ll always have good “flora.” And get on Facebook, which offers one legitimate benefit, no one can sneeze on you.