Plastic bags are well-nigh immortal. In many cases they will survive for over 100 years as landfill waste or litter, and can be used by vampires for lunch bags.

Mexico has a serious problem with plastic bags. They’re everywhere.

Last month, lawmakers in Veracruz prohibited the use of plastic bags, packaging and straws. Similar bans are being enacted in many other municipalities.  Local merchants who continue to provide these disposable bags are being punished with fines and with refusals to renew business licenses. The bans also serve as a conservation effort, as bags and other plastic packaging are known to strangle wildlife.

But as you might see from your plastic bag drawer, these penalties have had little or no effect on proliferation – or your ability when on shopping trips to remember a tote bag or pillow case, or a fishing net if heading to Costco. Or, you can just dump everything you buy in your arms and risk looking like a looter and being shot.

The bags are as deeply entrenched in our product distribution chains as are 16-wheeler, road crunching Coca Cola trucks and that “impossible-to-open” shrink-wrapping. (Raising the question, why should it take me 25 minutes to dig out an aspirin?)  Here at lakeside, all of this is vividly apparent,because there’s no authority overseeing prohibition and no one is sure what is recyclable and what isn’t. Polyestyrene terephtalate bags are the ones that are recyclable. Unfortunately, more than 500 billion plastic bags are used every year in Mexico and nobody knows which are biodegradable and which are not.   Also part of this eco-disaster are drinking straws, which all come from China, the drinking straw capital of the world. 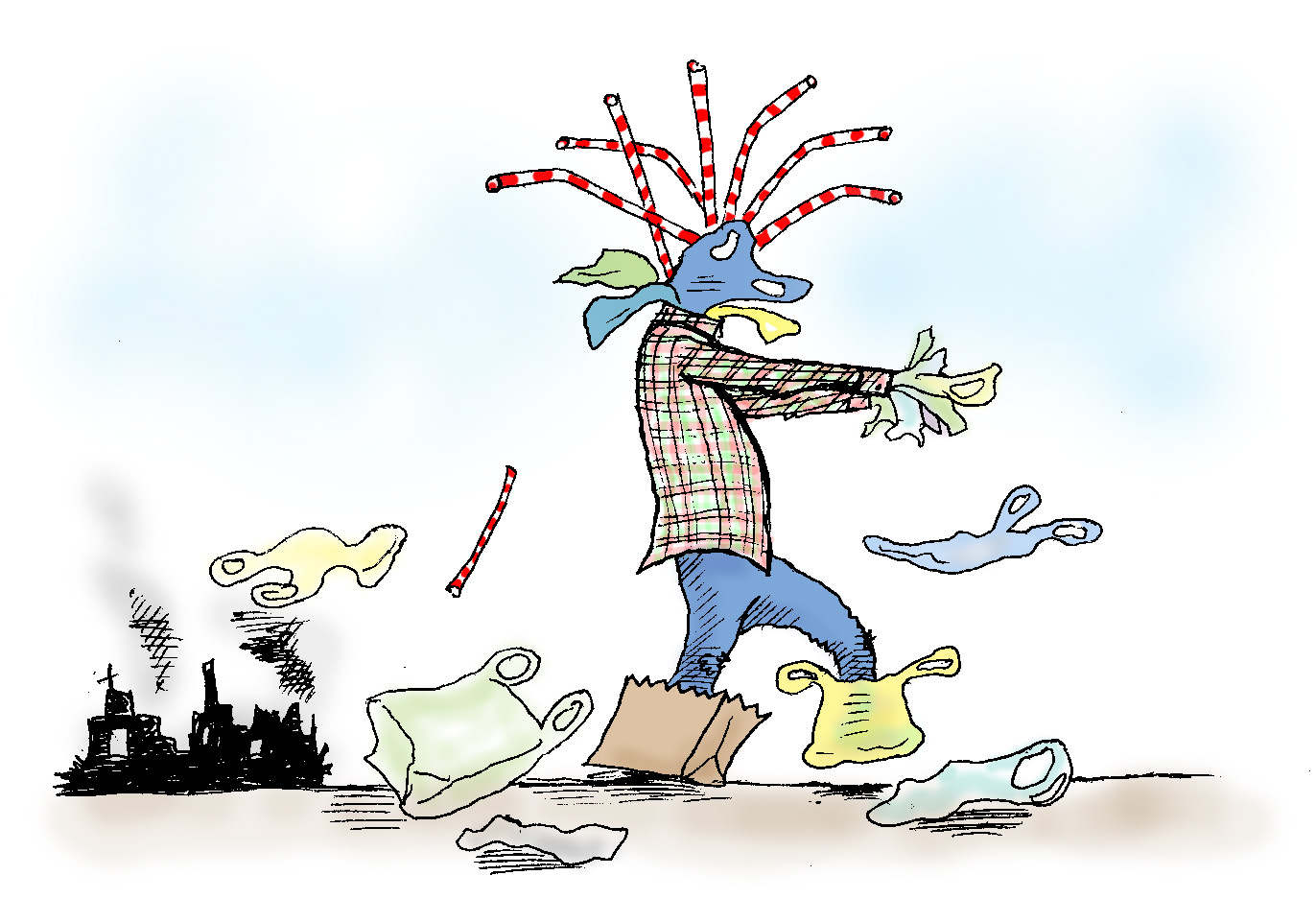 Apparently, straws are destroying our environment and killing pelicans somehow. You’d think pelicans would be the last creature interested in straws.

I’m going to go out on a limb here and say drinking directly from a glass is not that bad. Yes, you get a little on your lips, but this is the price you pay to protect the environment. What we need is a hotline to help us change consumer habits and be able to define which plastic bags live to be 100 and which can be recycled, melted down and exported to China, where the Chinese will use them to make clothes, car parts and God only knows what else.

This raises the existentialist question of what is trash. Recycling has become so environmentally correct that I don’t know what I can throw in the trash without guilt. One day, I had a large empty margarine tub with no indication on it that it was recyclable. I didn’t throw it out. It’s now the centerpiece on my dinner table. It looks like I invested in Trump Enterprises.

Speaking of investment options, biodegradable plastics have recently entered something called the bioplastics industry, which is creating other products from the plastic derivatives, some that are being used instead of pesticides. A good investment option? Although I have noticed a vague note on the skin on one of my eggplants that I swear said, “Thanks for shopping at Myra’s.”

Finally, I couldn’t leave out what used to be called the “plain brown bag” that never got any respect – and was replaced decades ago because it was claimed to cause the clear-cutting of valuable forest. Today, the plain brown bag isn’t plain anymore or brown. It’s available in all sizes and colors, but you have to buy them on Amazon.  From where they will be shipped to you wrapped in plastic.