Almost everyone at Lakeside has a dog or two or three. Our canine companions are important to us for any number of reasons.

They are cute or smart or sensitive or loving or psychic. They are companions and protectors and crumb-slurpers. I feel some of these wonders about my own dog, S’koocha. And like many of us, I get into anthropomorphizing her, that is, thinking of her as a person. But she’s not. 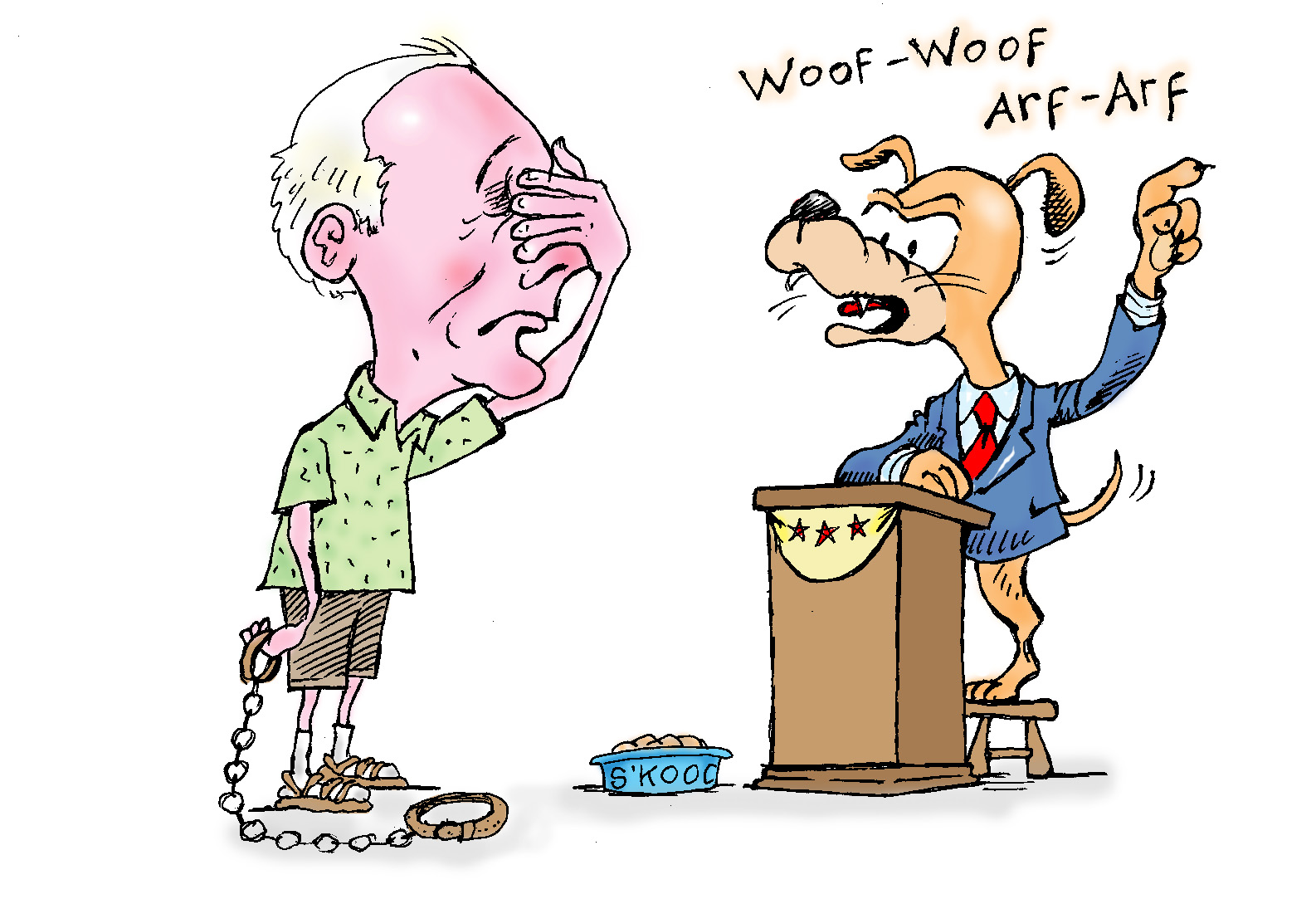 This only serves to give your dog a false sense privilege and status. And they can get uppity and take your “talking” to them a little too seriously. For example, when she insists we’re going for a walk. She marches about the door making a fuss, even barking sometimes, until I notice.  I have to straighten her out by explaining that she is not my superior. I’m her superior. Well, at least in some cases.

I also tell her that, like most Mexican dogs, she was not planned. She was an accident. I don’t want to upset her, but she has to know the truth – no family planning. Further, I found myself explaining why she is still on four feet while I am on two feet in the more superior position of looking down on her. “If you’re on four feet,” I said, “that means you can’t stand up and do evolutionary things like comb your hair or make meatballs.” (Which is what I was doing at the time.)

She just stared passive-aggressively, resembling a man trying to guess my weight.

I had to add: “And your hopping around on your hind legs when I say ‘dance for cheese’ isn’t the same thing. If you could dance for cheese on your own and then go and get cheese in the refrigerator and eat it over a plate with possibly some pate, that would make me take notice. However, that’s never going to happen, unless you’re in a Disney movie.”

I explained the next obvious thing: intelligence. “Humans have come a long way since we climbed out of the trees. We began inventing things, such as wheels and fire and weapons, and of course a little later, accordions.”

Now, my point to you is this: Responsible people who respect their neighbors and their neighborhood do fuss over their dogs. We pick up after you. But you shouldn’t misunderstand this and assume you are some kind of royalty. You’re just hygienically challenged. Those pet owners who don’t do this are miscreants, because they’re lazy and complicit.

And it goes without saying (I’ll say it anyway for miscreant pet owners), one has to keep you humble by walking you on a leash. This is your notice that you have to remain connected, because you will sniff yourself into a tizzy and wind up in a lost and found kennel. And  we may never see you again.

Also, a good pet owner will always look after your health and your parasites with vet visits. That’s because you have a habit of forgetting to take your deworming pills.

And I wouldn’t be a responsible keeper if I let you roam about the streets on your own. You would only assume territorial domain, chase cars and pedestrians and possibly try to run for public office.

Finally, just because you can hear raucous sounds at very high pitches and you raise an alarm by leaping about and barking at odd noises, that’s not a sign of superiority. It just means you are living across from an eventos hall.