It’s time for my recommendations for Christmas. For all of our griping about how Christmas has changed from the days we were getting gifts of oranges, handkerchiefs, cufflinks, stockings and ties (and what man didn’t want a LOL Santa tie with his nose lighting up?), the truth is the yuletide season really isn’t commercial enough, according to those people who understand the economics.

After all, giving gifts to every living creature we know (including Fritz the Shiatsu) is what the season has been about for decades. We empty wallets, max credit cards and pawn guitars. This is just merry economics. Close to 60 percent of all retail sales each year take place around the Christmas holidays. The rest of the year it appears we shoplift.

And it all started with the iconic first gifts of gold, frankincense and myrrh. And, of course, the baby went gaga over the gifts, especially the myrrh, which I don’t believe any infant could ever have enough of.  If the myrrh wasn’t exciting enough for the holy child or the holy family, then the kings surely had a Plan B gift to make sure no one was disappointed: possibly oregano, wasabi nuts, or more likely, gum arabic. The point here: avoid gift-giving disappointment by always having a plan B gift for everyone. Double down on the commercializing and, say, get that health magazine subscription for friends who might be in the hospital or have been scoffing at mini-strokes. And don’t forget that funky White Elephant gift you need for that funky Christmas party. You know, it has to be cheap, tawdry and useless. I got the biggest White Elephant gift in the States two years ago  our president.

Everybody needs to be happy during the holidays. It’s just expected. 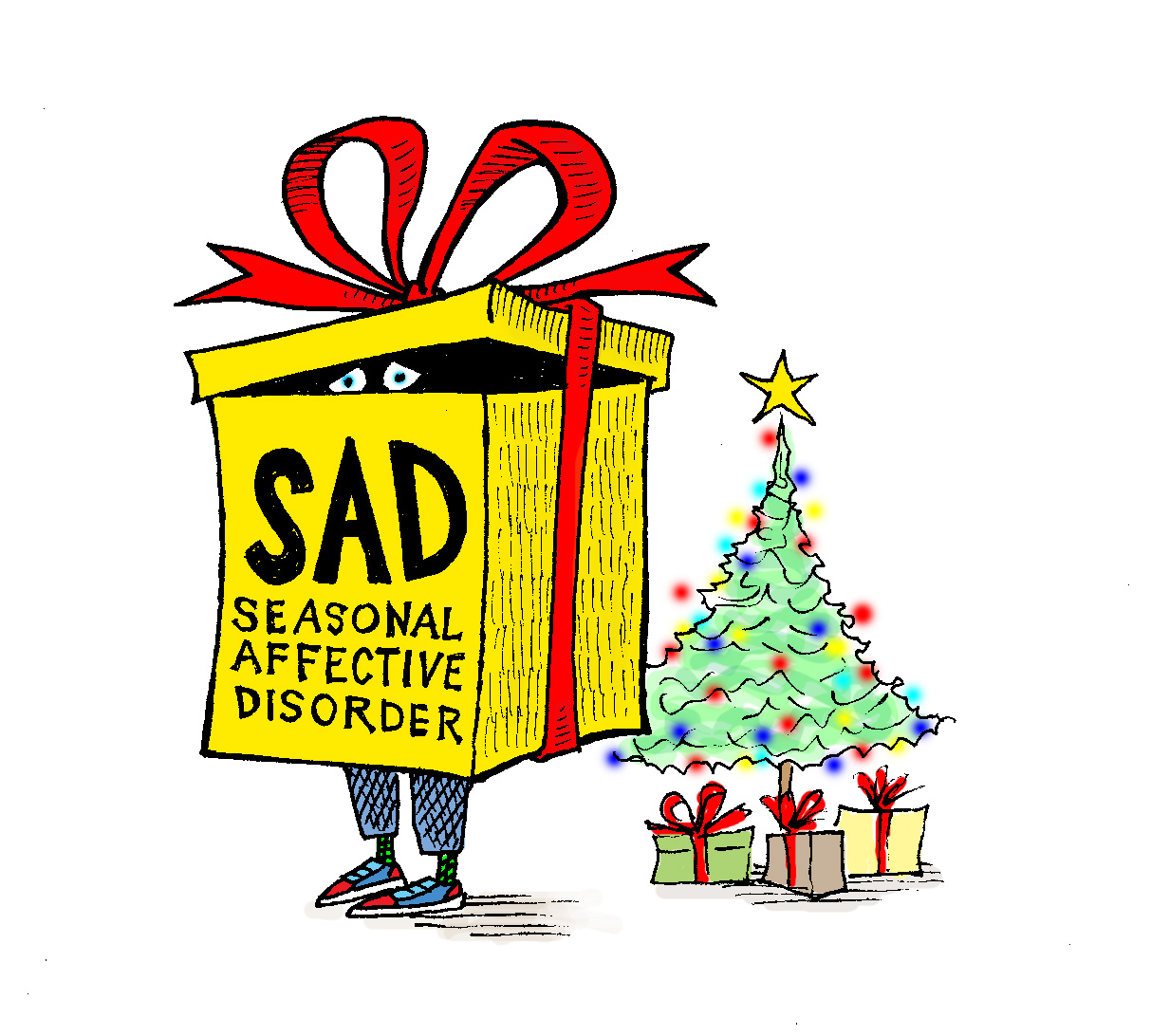 That takes me to the second season requirement. Some people don’t feel jolly and can make all of us feel bad. Seasonal Affective Disorder (S.A.D.) is a real illness like bronchitis, only not as loud. And recent test studies seem to show that the brains of people with S.A.D. actually shrink, which explains why test subjects couldn’t do simple math problems and several went down one hat size. If you’re wondering if you have S.A.D., there’s an easy test you can take. Just answer Yes or No to the following questions, and do not have any solid food for 12 hours, either before or after the test, whichever you like. Please begin.

Do you feel bad about Rudolph, really bad, such that you wish harm would come to Prancer?

Do you harbor suspicions that the carolers at your door will return later to break in and steal your PIN numbers?

Do you feel a sense of hopelessness about the new year, because you know another smart phone is coming out?

Does the idea of suddenly receiving Ten Lords A-Leaping evoke feelings of anxiety?

For these friends, consider a tree with boughs hung with Xanax or Clonazapam pills.

Now, to get everything done and every friend and family member met and cheered, I’ve concluded that Christmas needs to be longer. That could be fixed by starting the Christmas season on Columbus Day in October. (After all, he was the first European to celebrate Christmas in the New World. No, not even the Vikings would stay in Newfoundland in December.) And the season would end only after you’ve finished Aunt Dee Dee’s fruitcake, which is usually around the middle of March, because it’s non-biodegradable.

Starting in August would begin a proper “Christmas season,” let’s say, when Mary realized she was pregnant, with holidays for the blessed water breaking, the sacred labor pains, the angelic screaming at St. Joseph for being such a jerk, the smacking of the divine buns, extending into March with the baby’s first words, “I’m the son of who?”