Many of us will be traveling this summer, or already have, to visit family and friends. And we’ll be getting on a plane, which is currently nothing more than a human sausage.

As I recall from past trips, I could have been stuffed in a hockey bag and dumped into cargo and have had a pleasanter journey. And I know nothing has changed. 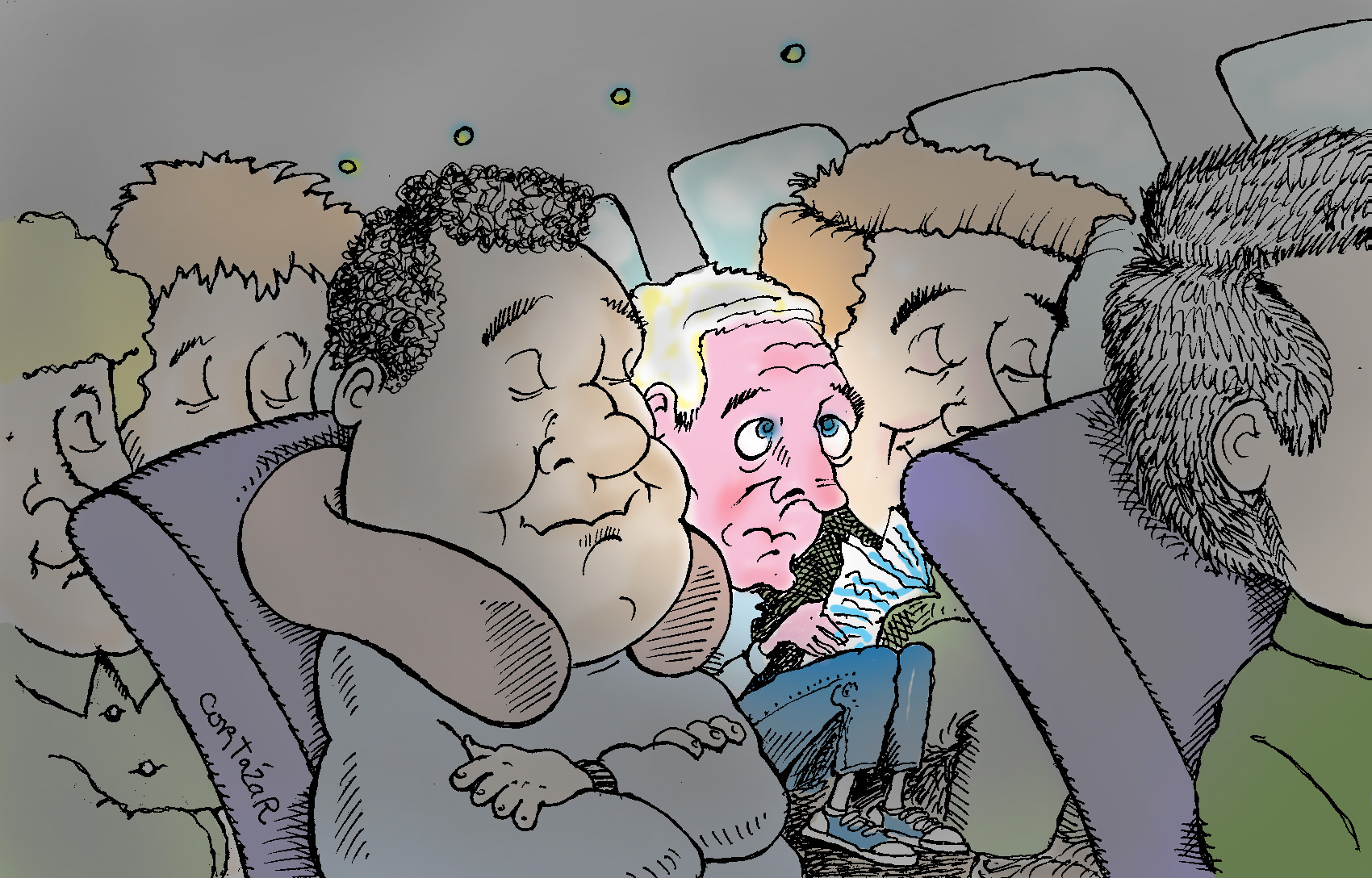 I can put up with just about any insanity related to flying in a commercial airliner, including security checks and interminable customs and immigration fuss. The one thing I consider the ultimate sacrifice is flying around for several hours in three-cubic feet of space, ergonomically designed for the spatial needs of a Capuchin monkey (a creature that needs little personal space because he can do things like wash his face with his tongue).

Furthermore, three cubic feet of space begins to reduce further by overlap from the two BIG co-passengers who almost always squeeze in on either side of you (and aren’t really big at all, but get bigger the moment they sit down). There is usually convivial acceptance all around, and an immediate forgiveness when your row mate gropes your buttock on his way to finding his seatbelt buckle. Your carry-on bag then goes under the seat in front of you, leaving your mortified, limbs either dumped inside your carry-on, crushing your bag of pretzels, or pinched beneath your own seat with the potential for a deep-vein thrombosis and possible death. Legs inside the bag is the fairest option, given that your dying in mid-flight, will ruin your co-passengers in-flight movie.

As a quick distraction from such thoughts, you snare Sky Mall Magazine. It’s unfailingly right there in front of you, as ubiquitous as the Gideon Bible.  But you never really get to read much of it, because very shortly the guy in front of you decides to lower his seat back into your lap, giving you the eerie feeling the guy is looking for a shave.

This situation continues to exist after almost fifty years of modern airline development and advancement, because stuffing as much internal spacial capacity with fliers is an airline’s key to profitability, despite the Geneva Conventions prohibiting human sausaging.  And it’s not going to change. Here’s why.

According to airline experts, it’s about the capacity/profitability math. You take the airline revenue production measure, something called Revenue Passenger Mile (RPM) – one passenger seat flying one mile, and, of course, if that seat is traveling on its own without the rest of the plane, it’s in violation of FAA regulations. AND a sure lawsuit.

To calculate what airlines claim is still the cheapest way to travel, you divide your ticket price by miles traveled, say 500 miles.

If a customer pays $250.00 for the 500-mile trip mentioned above, the passenger cost would be 50 cents per mile, including gratuities and a bag of peanuts. Airlines claim this is cheaper than calling a cab. The obvious problem with this argument is that nobody tries to take a cab from New York to Easter Island, at least not sober.

Anyway, while all this airline generosity is spinning through your thoughts, it’s always nice to hear the snack trolley coming, right? Except that now, down comes the placemat sized tray in front of you. This tray just fits under the sleeping head of the imbecile in front of you. But it further compresses your only movable body part, your diaphragm, into a tortilla. All the space around your body has now left you more or less with the freedom of a shrink-wrapped fish fillet. But... RPM makes it  much cheaper to fly to the Canary Islands instead of using an Uber.

Not surprisingly, the man coming from the window seat interrupts your in-flight repast just as you are savoring your fourth peanut. He has to go to the washroom and could be any size. It would still feel like dancing with a bear.

At this point while we don’t understand all air rage, we have the scientific explanations for why caged animals often eat their keepers. How about just a nice Skype call to north of the border instead.