We hit retirement age, our lives become simpler with children off (replaced by small vials of pills), and with large spaces and things collecting dust. So, the first thing we do is plan to downsize.

We don’t really need to keep the kids’ theater costumes and sports equipment, or the gourmet kitchen apparatus and tech utensils (that looks like the cook’s equivalent of CERN), heirloom silverware and quilts (carbon-dated to the 18th Century). No need for a three-car garage where all your boating and fishing equipment is packed and strung, reminding you that you haven’t fished or water-skied in 40 years. No need for all those clothes and shoes, most of which you kept for the day you lost 38 pounds.  No need to keep your grandmother’s old photo albums of uncles with hair parted in the middle you never knew and never met. And to hold much of your stuff there’s the armoire the size of a Denny’s. Other big furniture includes “sectionals,” sofas that spread around your living room like Mexican Train. No one ever sits on them, unless they’re withdrawing emotionally from house guests. 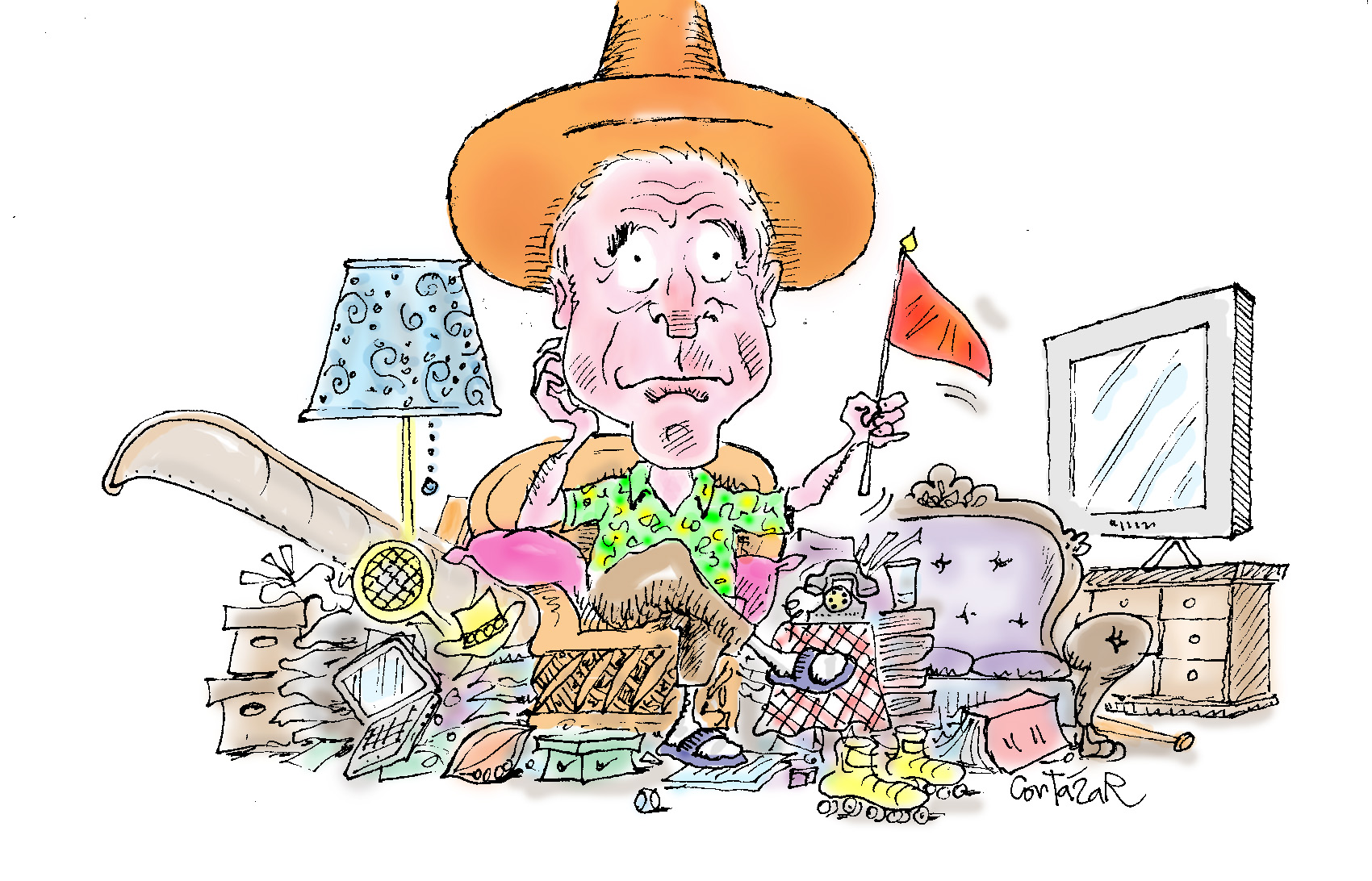 Books. Everybody has all the most important literature and reference books ever recommended, and you have read all the jacket covers thoroughly. You may even have a huge set of encyclopedias that require a special bookcase but are so old they do not include World War II. No one reads anymore, so it’s almost impossible to rid yourself of books, unless you can find a neurotic with an Obsessive Compulsive Hoarding Disorder.

So you get rid of most of this stuff, yard sales, estate sales or forced on the children (who have the yard sale anyway and everything is 50 cents).

So you pack up, with only the things you really need, including your Salesman of the Month Award from 1971, and you’re off to Lakeside, for its simple, easy living without clutter and responsibilities for “stuff.” And there, you can afford a spaciously generous home with your retirement assets.

You start anew, with an entertainment purchase for a price you can’t resist, a 55-inch television with some kind of transmission box you don’t understand that promises stations from around the world.

But to really enjoy that TV, at which you are spending a lot of time, you need to get comfortable and the equipale sofa isn’t something you can slouch in, at least not like you could with the Italian leather sofa that stretches 10 feet across and has a half-dozen exquisitely handmade pillows you saw at a bazaar. Absolute necessity.

But as it’s the bazaar’s only once-a-year sale, there’s a perfectly good reason to take advantage, so you pick up a toaster oven and pressure cooker to make your once-a-week cooking enough for all the week’s meals. Now you’re really set.

This process of “being set” goes on for another year, during which you had to take down your salesman of the month award for several beautiful Mexican paintings of fruit. The colors are just too bright and uplifting to pass up. And what goes with a giant painting of a watermelon? A friend just returned from Tulum with a gift statue of Quetzalcoatl. Perfect. So when the settee with upholstery featuring a lavishly decorated Tlahuizcalpantecuhtli, who was Quetzalcoatl reborn (but still called Quetzalcoatl, because nobody could pronounce his new name), appeared, no sophisticated decorator could resist it.

Suddenly, Italian stuff had to go and Mesoamerican stuff soon appeared to have squatted all about the bedroom, guest room and hallway. Even your bathroom somehow now had Mesocamerican furniture, its purpose remaining unknown. Although a plaque of Juun Ixiim, Mayan goddess of playfulness, now watched you shower.

Except that with your space now filling up through the years, it’s easy to start tripping over things that block pathways and door jams, and lamps or lamp tables are required everywhere to light steps into other rooms. But the lamps have to fit the décor and look like replicas of Chichen Itza. Eventually, it would take one plunge into the bull’s-head-based table and a bounce off the turquoise, camel-skin ottoman into the mahogany counter stools with the panther feet and landing against the stone Montezuma pedestal to create an epiphany.

As you’re being treated for a dislocated shoulder, your thoughts ring out like bells.