There are no hedgehogs in Mexico, you say? 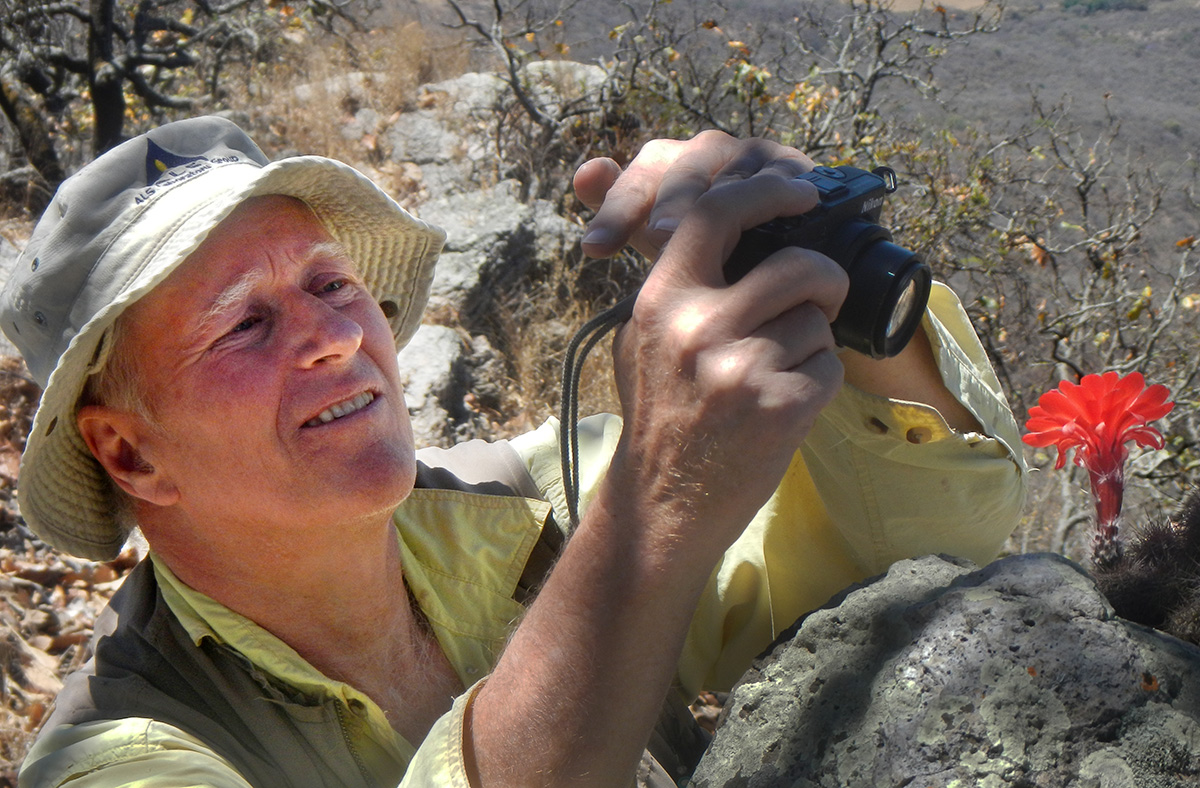 Well, to be more exact, it was the hedgehog cactus (Echinocereus) we were after in hopes of finding one in flower.

This little cactus grows in Arizona and parts of Mexico, Jalisco being about as far south as you are likely to find it. The word Echinocereus is a curious combination of the Greek word for hedgehog and the Latin word for candle. Since this cactus is small, roly-poly and prickly, I could understand the hedgehog part of its name, but what about that candle?

I think I found the answer.

“The last week of March and the first week of April are when the hedgehog cactus is in bloom,” said Chris Lloyd, geologist, birdwatcher and now cactus spotter in a message. “Who wants to go look for a hedgehog flower this Saturday?”

Since cactus flowers, unlike birds, can easily be seen all throughout the day, we took off for the target area at 8:30 a.m. instead of 6 a.m., which I liked just fine.

The other two cactus-flower hunters were Julio Álvarez and Carlos Contreras, two of the best birders in Jalisco.

Our route took us along roads that grew progressively steeper and rougher. Naturally, progress on brechas can be even slower if the car is full of birders: “Mira! Over there! I think it’s an Arizona Woodpecker!” And, of course, the car stops and three pair of binoculars are raised, often to be followed by cameras with big telescopic lenses and plenty of discussion as to the exact species on that far-away branch. 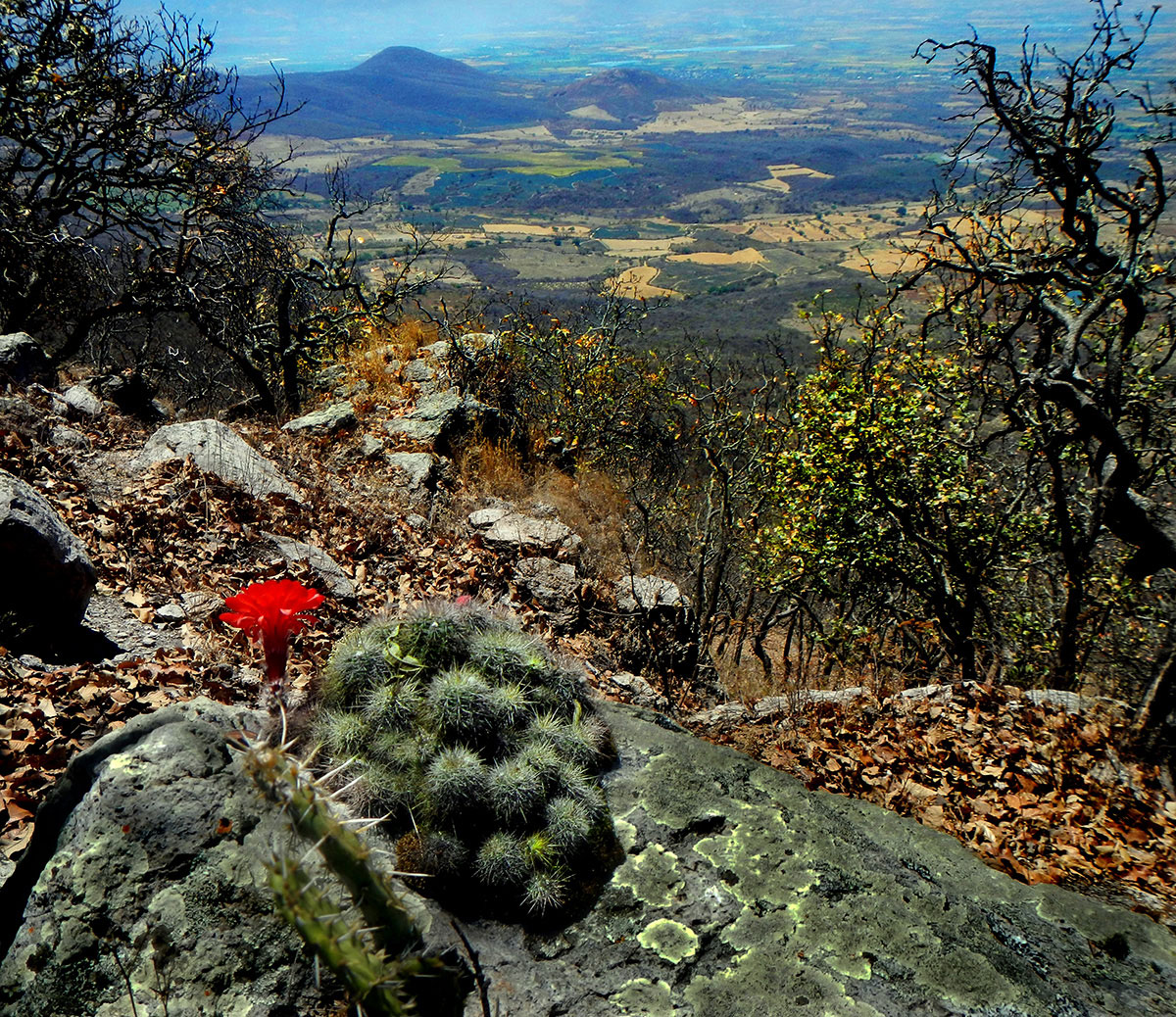 After an hour and a half, even the dirt road sort of petered out and we were simply driving through a long gap between two fields of young agaves. Under a big shady oak tree, of a type I’ve never seen before, we parked and began walking. But interspersed among the agaves were huge numbers of Indian paintbrushes and gordolobo flowers, mercilessly distracting us from our mission. Soon we were all making a huge ruckus crunching through thick layers of dry leaves overlying countless loose rocks which, upon inspection, turned out to be small chunks of obsidian.

At last, at nearly 2,000 meters elevation, we came to the “good spot for hedgehog cacti,” which was, in my opinion, a good spot for anything because it was the top edge of a high cliff overlooking a long, flat plain bordered by distant mountains. It was a truly impressive lookout point, outclassing many a mirador I’d seen elsewhere.

As for the little hedgehog cactus, not one was to be seen.

We proceeded along the cliff edge until we bumped into a big cluster of Echinocereus. Numbering at least 300 ... but not a one of them blooming! Following the lip of the precipice, we spotted several more colonies of cacti, all of them much smaller than the first we had seen.

Then came cries of surprise up ahead. Chris had found a small colony with a big red flower in full bloom: the photo opportunity we had been waiting for! This cluster of cacti, like many others we had found in the area, was accompanied by a small nopal right next to it, suggesting that the two plants may be working together for their propagation.

We found about a dozen colonies of cacti during our three kilometer hike and by the time we had finished, it seemed pretty clear what the “candle” was in Echinocereus. Before blooming, the flower looks like a long, waxy, red candle which opens to reveal wispy yellow stamens which – especially after a stiff tequila – could easily suggest a flame dancing in the breeze, to the woozy botanist.

Since there are people out there who might scoop up these hedgehogs to transplant to their gardens, I can’t publicly reveal the site I visited, but I suspect you could see that same hedgehog flower – minus the long drive and walk—by visiting the Gran Vastaguera Restaurant, Ceremonial Center and Botanical Garden (with its collection of over 700 succulents and cacti) at the east end of Lake Chapala. Just ask Google Maps to take you to “Centro Ceremonial Pacal Votan, Jalisco.” Driving time from Ajijic is one hour and 11 minutes, and it’s about the same from Guadalajara.