Although Jalisco is said to have the fourth largest deposits of obsidian in the world, this information comes from publications that are several years old. 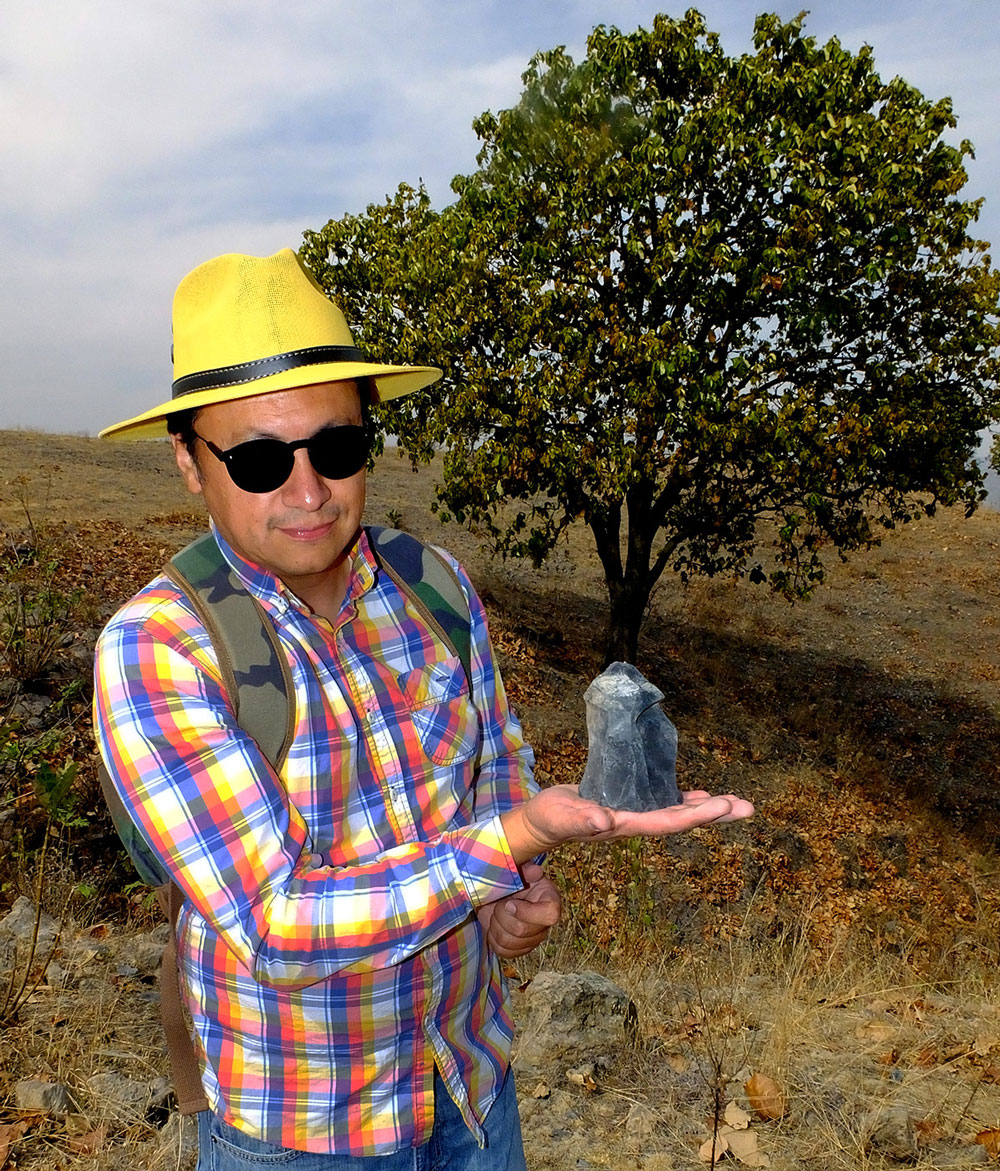 An ongoing study of the sprawling Ahuisculco deposits will probably propel Jalisco to a more important position both in Mexico and the rest of the world.

And with this in mind …

“One of my postgraduate students has discovered a new and important obsidian deposit – with several pre-Hispanic workshops – would you like to see it?”

The message came from Dr. Rodrigo Esparza, an archaeologist and professor at ITESO University in Guadalajara.

“Of course I want to go,” I told the archaeologist. “When do we leave?”

Geologist Chris Lloyd and I met Esparza and his students at the little town of San Isidro Mazatepec, located only 20 kilometers southwest of the Periférico (Guadalajara beltway). One of the students, Luis Carlos Acedo, had discovered the ancient obsidian workings while hiking in the nearby hills and he would be our guide.

We started out in two trucks, but the dirt roads we were following were so steep and covered with loose rocks that one of them couldn’t make it up the hill. However, with the whole gang of us piled into Chris’s truck, the traction was much better and we soon arrived at the point where our hike would begin.

Well into the dry season, there was little maleza (undergrowth) to worry about – just a few barbed-wire fences to squeeze through: the typical way just about any hike in Mexico begins. After about half an hour, we arrived at a mine surrounded by a large, impressive workshop. 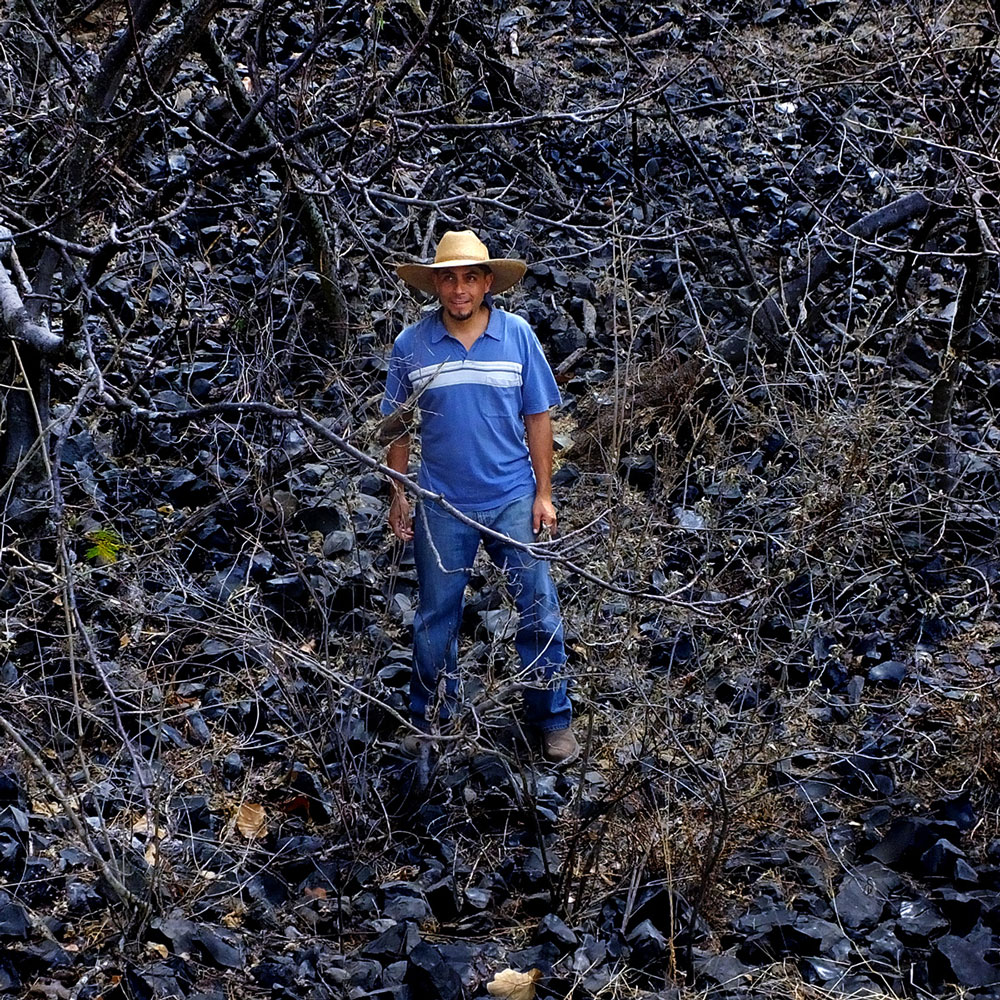 So what did this look like? First you must wipe your mind of all preconceived notions both of mines and workshops. Because good quality obsidian was plentiful right on the surface in pre-Hispanic Jalisco, ancient miners had no need of deep pits and underground tunnels in this area. A typical obsidian mine 1,000 or 2,000 years ago was just a wide hole or trench maybe a meter or two deep at the most.

Today, all your eye will see is a slight depression surrounded by the taller, which translates as “workshop,” but doesn’t mesh at all with what that word means in modern times. Erase from your mind anything like a building or shelter housing work benches and toolboxes. The artisan’s shelter might possibly have been a shady tree (now long gone) and his tools were probably nothing more than a nicely rounded rock and maybe a deer horn.

So just about the only thing for you to see at the mine and workshop is rubbish, technically called debitage: the throwaways left lying on the ground. 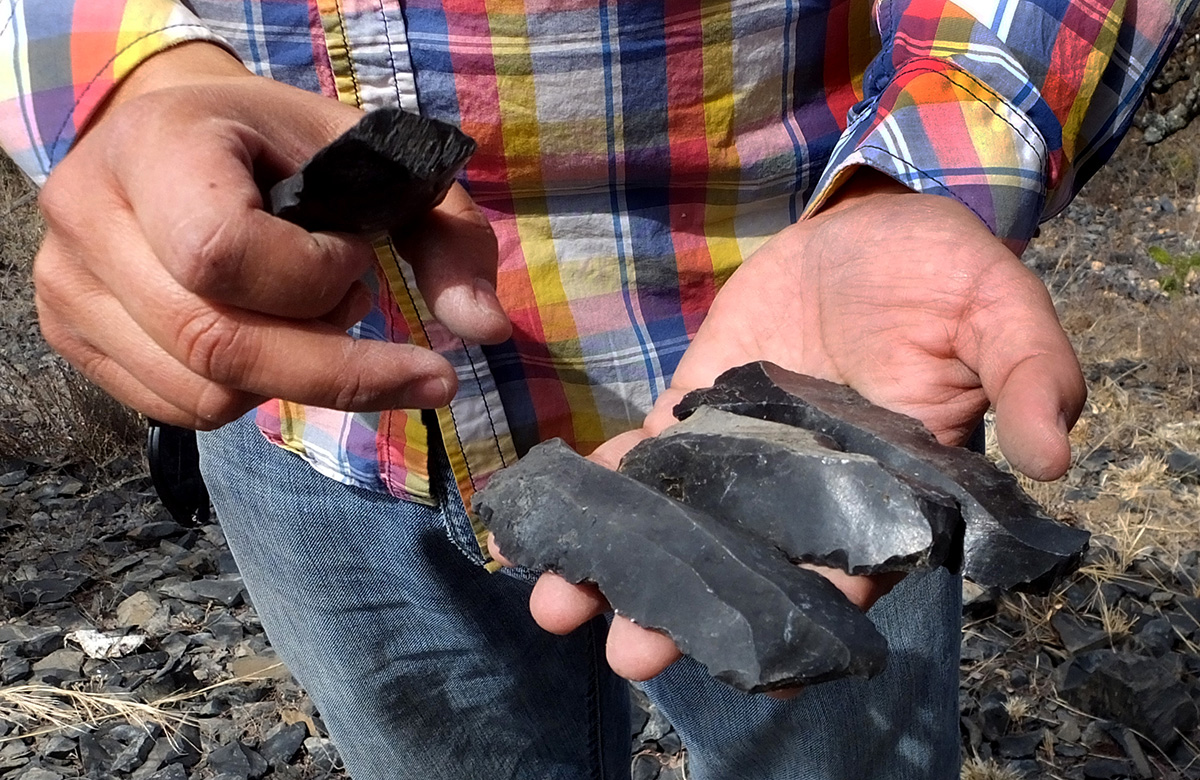 The mining procedure might begin with a chunk of obsidian pried out of the ground. Its rough and weathered exterior is of no value, so the outer layer of this lump of natural glass is removed by percussion, hitting it in the right places with a hard rock (not made of obsidian).  If the now smaller chunk survives this dressing down and shows no cracks holes or intrusions, it might be carried off and that would mark the end of the mining operation.

In many cases, tool making might be carried out on the spot. In this case, that original chunk is shaped, again by percussion, into what is called a nucleo (core). This looks a bit like an artillery shell, flat at one end and pointed at the other. 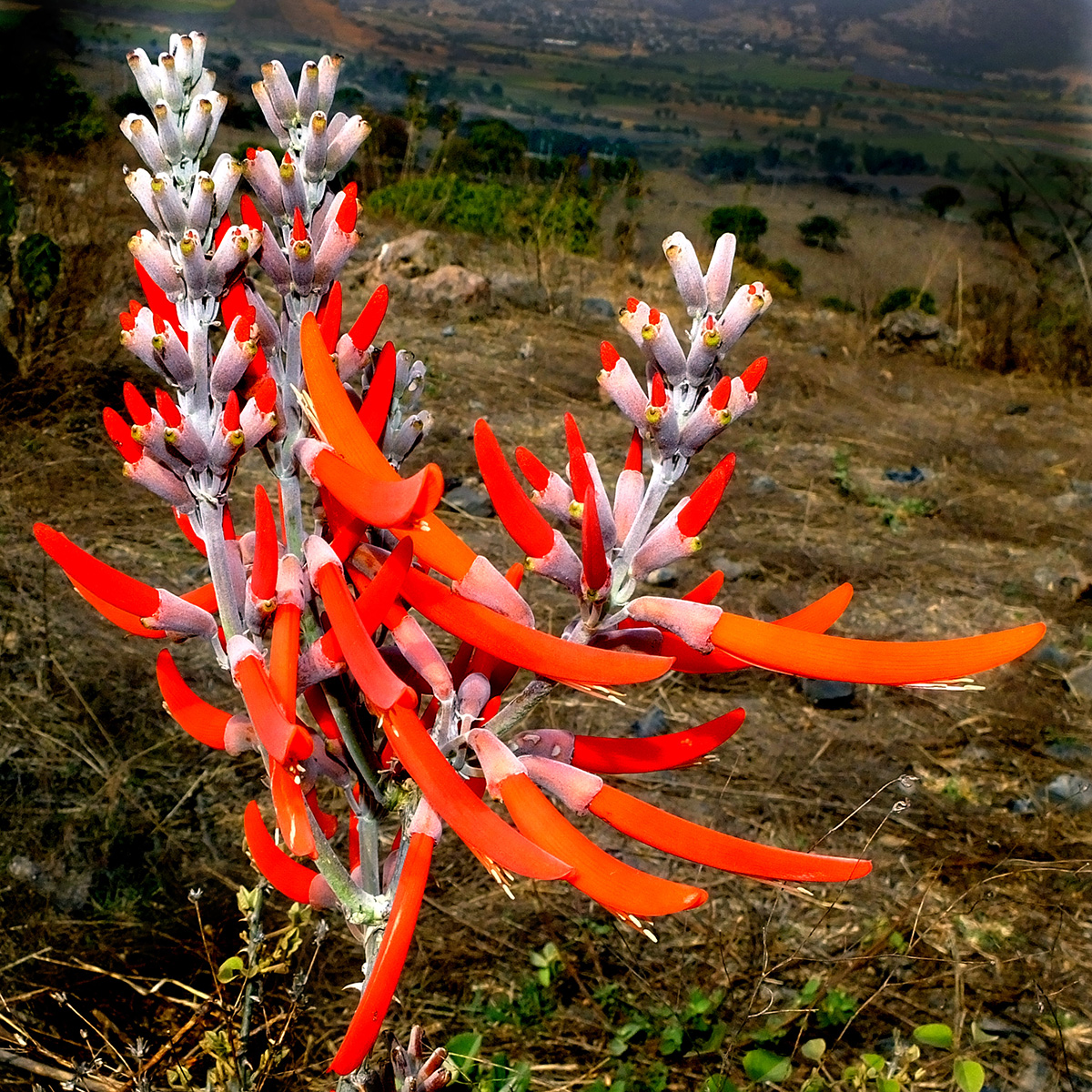 Sitting on the ground, the artisan puts the core between his legs, flat side up and applies pressure, perhaps with a deer horn, to just the right spot near the edge, causing a long, thin, narrow blade of obsidian to pop off. You can get a good idea of the process by watching a few of the many videos on YouTube showing skillful modern artisans turning rough chunks of obsidian into beautiful arrowheads or knives using these same skills. Just search for the words “knapping obsidian.”

In the hills above San Isidro, Acedo led us to several talleres containing thousands of discarded pieces of worked obsidian, most of them broken bits of what had started out as knife blades. One of the first things Esparza picked up was a round stone the size of a tennis ball. “This was the artisan’s hammer and with it thousands of tools were made,” he said.

It didn’t take long for us to find several cores from which blades had been extracted. These were about ten centimeters or less in height, and would have produced smaller knives than those we had seen in the workshops of the Ahuisculco deposit.

“This obsidian deposit seems to be geologically distinct from those at Navajas, Ahuisculco and La Primavera,” Esparza told me. “It looks like they were mainly producing blades and flakes, but of a very high quality. Material from this site was probably transported along commercial routes through the Sayula Basin to the Lake Chapala area. This may have been going on during the late classical or postclassical period. We’ll be able to verify this and the age of these workshops once we’ve done a geochemical study of the samples we took from this area. Luis Carlos may be working on this for the next year or two.”

While visits by the general public to sites like these are not recommended, you can see similar ancient obsidian mines and workshops at the Selva Negra Nature Preserve, located three kilometers northwest of Ahuisculco. Contact the Selva Negra Foundation through their Facebook page @fundacionselvanegra.