In bygone years I wrote several articles for this newspaper describing my adventures rappelling down deep pits in a mountain “filled with caves” in Cerro Grande, part of the the Manantlán Biosphere Reserve, which is a 2,860-meter high mountain range located 150 kilometers southwest of Guadalajara, straddling the states of Jalisco and Colima. 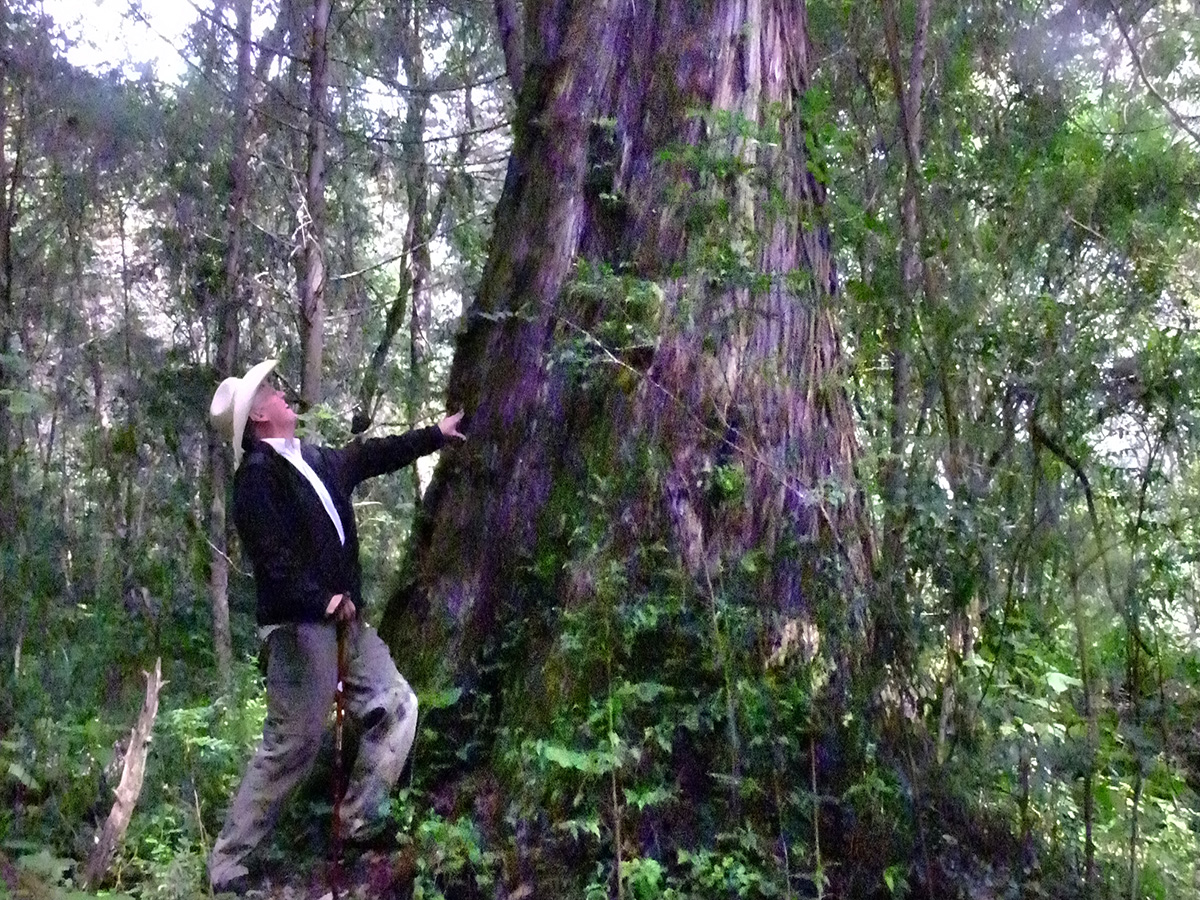 The area was declared a Reserva de la Biósfera in 1987 and a year later was internationally recognized as such by UNESCO.

Recently, I discovered that a friend of mine, Sergi Gómez, was leading tours to Manantlán, and last Saturday I decided to go have a look.

My neighbor Richard Gresham and I set out early from Guadalajara and after two hours reached the home of Gómez on the outskirts of Colima. We caught my friend busy working on the construction of his new hyperadobe house, built from hundreds of earth-filled mesh bags, stacked one upon the other, igloo-fashion.

Gómez, who is the head of an organization called Aventura Camp Colima, noted that the Sierra de Manantlán drew worldwide attention in 1979, when a primitive, perennial corn called Zea diploperenis was discovered there.

“The local people call this milpilla or chapule and most botanists agree it is probably the original species of corn that all the hybrids in the world are descended from,” Gómez said. “This discovery got scientists investigating the Sierra, and what they found was an astonishing number of other rare plants endemic only to Manantlán. So the University of Guadalajara decided to set up a research station there and now we know that there are five ecosystems operating up and down those mountains.” 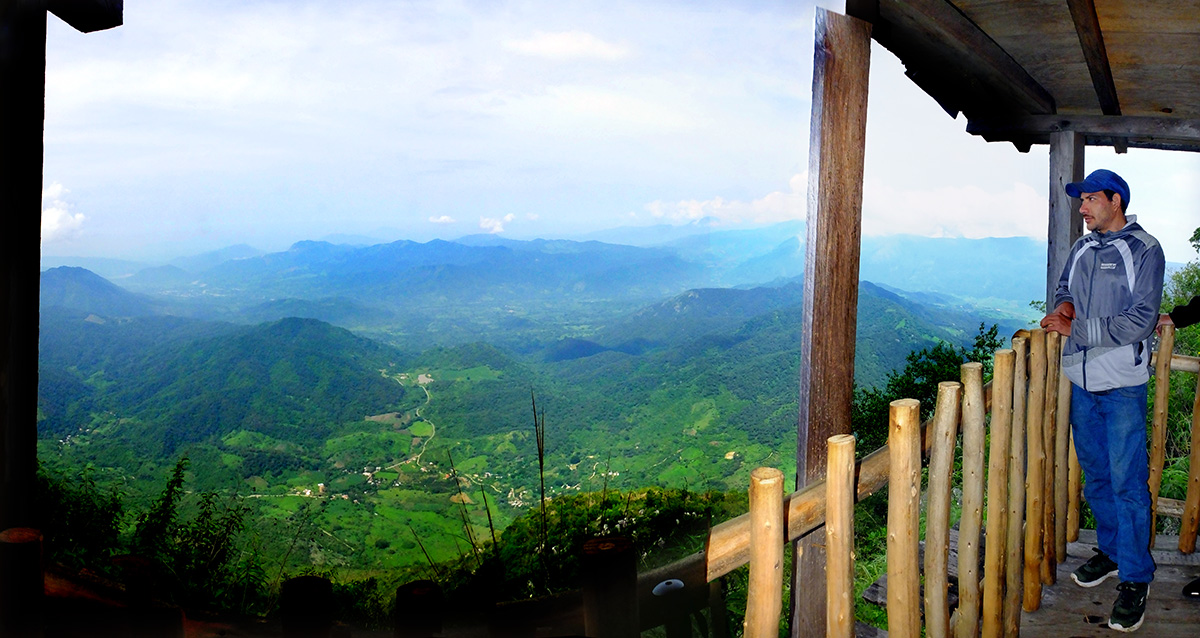 According to Gómez, 2,900 species of plants have been identified there, as well as 110 species of mammals and 336 species of birds.

“All this adds up to a truly unique site,” Gómez enthused. “I’ve traveled to all of Mexico’s national parks and in my book, Manantlán is the most beautiful.”

There are two ways to reach the indigenous village of Terrero, population 300. One route, is entirely paved, said Gómez, adding that the other is “much steeper and a good part of it is just a narrow dirt road with a high wall on one side and a sheer 500-meter drop on the other.”

He quizzed us: “You do have four-wheel drive, I hope? With brakes in perfect condition? I’ve seen a number of abandoned cars and trucks on that road, all of them parked with their front wheels up tight against the wall.”

In spite of this scenario, Gómez recommended we go up to Manantlán via one road and come down the other, in order to have “a complete experience.” 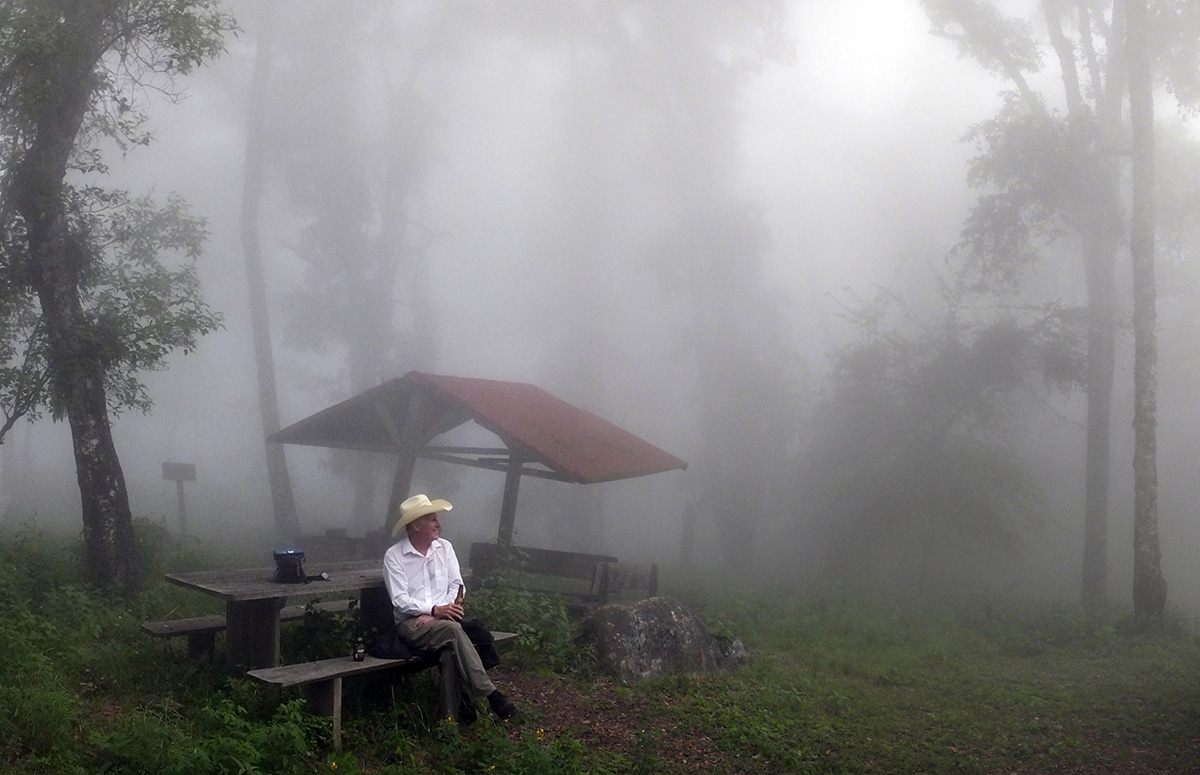 We decided to ascend via the paved road, but discovered the paving had been done minimalist style, using two parallel strips of concrete. Too bad for you if your wheels are wider apart!

As we rose little by little in altitude, the foliage kept changing. This was so fascinating that we found ourselves stopping again and again to wonder at orchids, bromeliads, lichen and Spanish moss.”

At last we reached Terrero at an altitude of 2,222 meters. We saw lots of cabins for rent but no people. We soon discovered that everyone was at the funeral of one of the best-loved members of the community. Nevertheless, someone immediately came to show us to our cabin, which, we were happy to discover, was located 300 meters from the main road at the end of a rustic brecha.

“Sorry,” we were then told, “but you’ll have no lights tonight. We have solar panels here, but someone stole the battery.”

Water was another thing that wasn’t working that night. Fortunately, we had come prepared for camping and I suspect anyone planning to sleep in Terrero ought to be equally ready for anything. 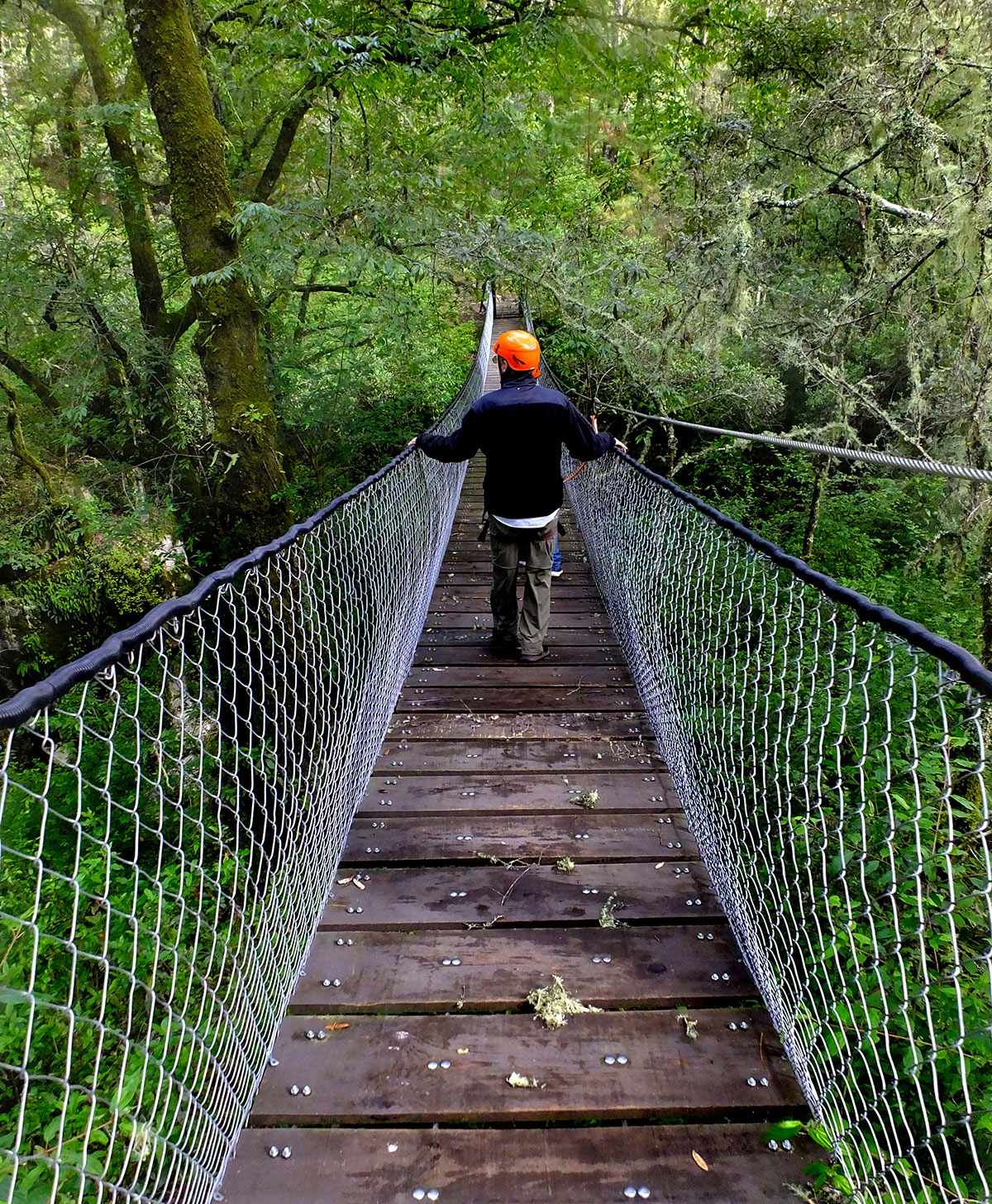 Since the per-person cost of one of these cabins is only 200 pesos a night, we felt we couldn’t complain and off we went for a delightful walk in the woods, cheered on by the incredible song of a clarín jilguero (brown-backed solitaire), which sounds a bit like three flutes being played simultaneously.

That walk convinced us that Gómez was right in calling Manantlán unique. The foliage was truly exuberant and we spotted all kinds of mushrooms, including some blue ones we were later told are good to eat. Upon our return, our cabin was suddenly shrouded in fog. This vanished as quickly as it came and as the sun set we heard a bizarre cry which we were at first convinced was of human origin. It turned out, in the end, to be the call of a lonesome herpetotheres cachinnans or laughing falcon.

On Sunday, a local guide named Leopoldo took us to a hanging bridge rigged over an 85-meter-deep doline, a funnel-shaped hole typical of these limestone hills, frequently including a deep, narrow shaft at the bottom. As I mentioned previously, Manantlán is famed for its vertical caves and this hanging bridge is a clever way to introduce tourists to this typical geological feature. For safety’s sake, each visitor dons a harness and a helmet and clips into a steel cable before venturing onto the swaying bridge. 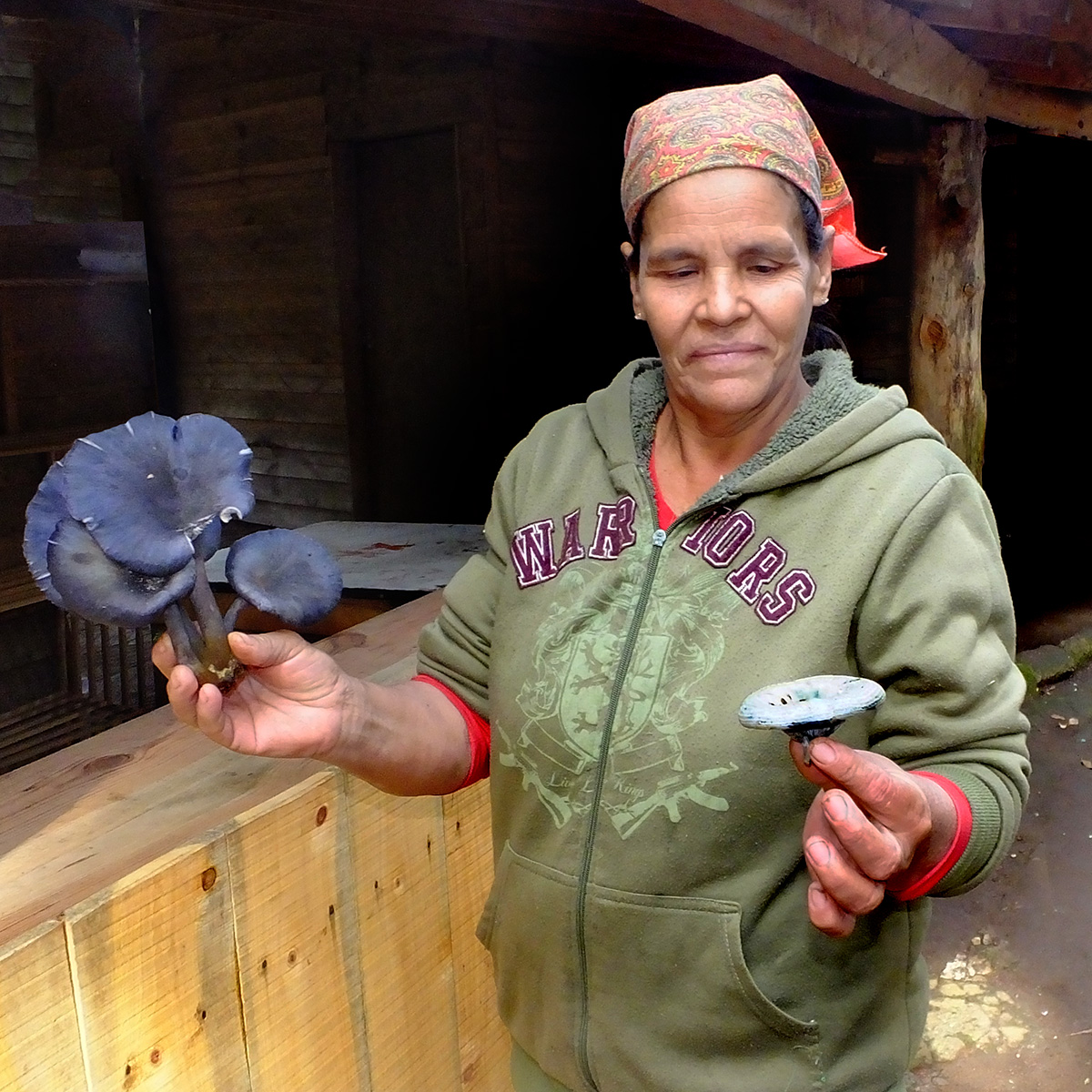 Our next stop was the Mirador del Filete lookout point, from which it is said you can see the Pacific Ocean on a clear day. The view turned out to be magnificent, but equally so was the half-hour walk to get there. So many strange plants, insects and mushrooms did we see that, in my opinion, the walk alone deserves five stars.

At last we decided to head home via the scary-sounding, ultra-steep route. It did turn out to be hair-raising in places, but was no problem for Richard’s 4WD. We got a pleasant surprise when we reached the village of Campo 4: a restaurant (with no sign!) called Cocina Economica Mari, where we enjoyed several delicious dishes prepared by María Engracia Pedraza Orozco, a prize-winning cook in Colima.

So ended our adventure, with an unexpected gourmet meal perched on the side of a nearly vertical precipice at the southeast end of the never disappointing Sierra de Manantlán.

To follow the route described here, see “Terrero Loop Manantlán” at Wikiloc.com. Driving time from Guadalajara or Lake Chapala: about 3.5 hours. For other great outdoor sites in Colima, check “Outdoors in Western Mexico, volumes 1 and 2,” both now available at Diane Pearl and Sol Mexicano Gallery in Ajijic.