Leftist presidential frontrunner Andres Manuel Lopez Obrader weathered a barrage of attacks from his rivals at last Sunday’s first televised debate, which focused on governance and security, corruption and democracy. 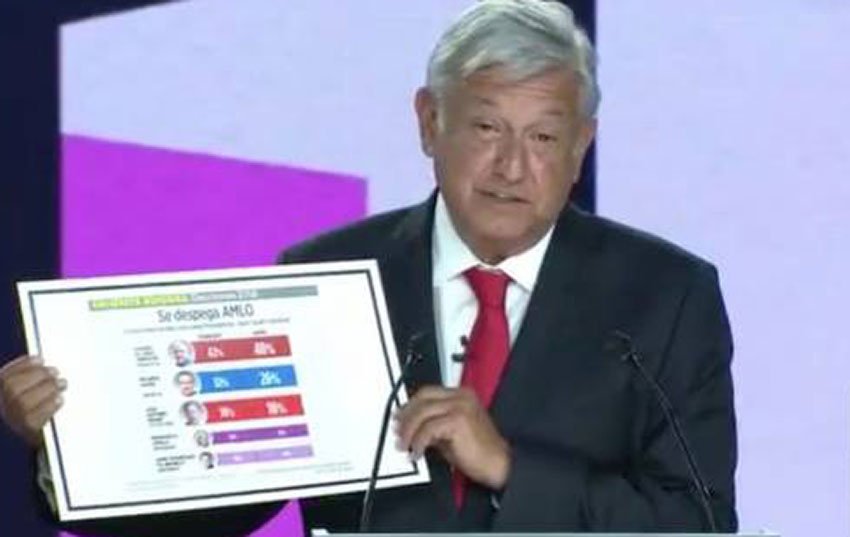 Lopez Obrador, representing the Juntos Haremos Historia (Together We Make History) coalition, was forced to defend his proposal of an “amnesty” for  drug traffickers and criminals as a means of bringing an end to the violence of recent times.

Explaining that amnesty does not mean immunity from prosecution, Lopez Obrador reiterated his belief that poverty and the lack of jobs is the major detonator of crime in Mexico.  Calling Mexico a “factory of poverty,” he said he would hold a widespread dialogue with all sectors of society to find solutions to the problem of crime.

The other candidates offered a much tougher stance on crime, with several promising to set up a federal, FBI-style, investigative agency to combat the all-powerful drug cartels.

Ricardo Anaya, the youthful candidate for the National Action Party (PAN)/Party of the Democratic Revolution (PRD) right-left coalition, showed off his intellect and debating skills while never managing to goad Lopez Obrador into loosing his temper, a trait that did not help his cause in his two previous presidential bids.  The frontrunner remained passive throughout, breaking into a wry smile when Anaya described him as a “tired” politician who is “obsessed with power.”

Jose Antonio Meade, representing the ruling Institutional Revolutionary Party (PRI) and who is trailing third in the polls, attempted to distance himself from the much criticized public security policies of co-religionist President Enrique Peña Nieto, admitting that Mexico’s culture of impunity must change, with major reforms to the way crime is investigated in the country.

The two independent candidates, Margarita Zavala and Jaime Rodriguez (“El Bronco”), offered scant heft to the debate.  The only eye-opening moment came when Rodriguez announced that he believed criminals and corrupt public officials should have their hands chopped off.

Most analysts concurred that while he didn’t “win” the debate, Lopez Obrador did enough to maintain his commanding 20-point lead in the polls.

Lopez Obrador was accused during the 2006 election over becoming overconfident after holding a lead in the polls. This evaporated as election day neared and he went on to loose narrowly to Felipe Calderon of the PAN.  With Anaya’s support growing – especially among young voters, surveys suggest – some analysts suggest a similar scenario might be looming as July 1 nears.

The leftist candidate, however, was not showing any signs that he had learned from his error of 12 years ago. During the debate, in somewhat Trumpian fashion, he help up a chart showing his lead in the polls, boasting that “something terrible would have to happen for me not to win.”