Pundits are saying that Maoism has returned to China and what could be clearer evidence of that than a new eatery in Guadalajara named Miau Zedong Dumplings? 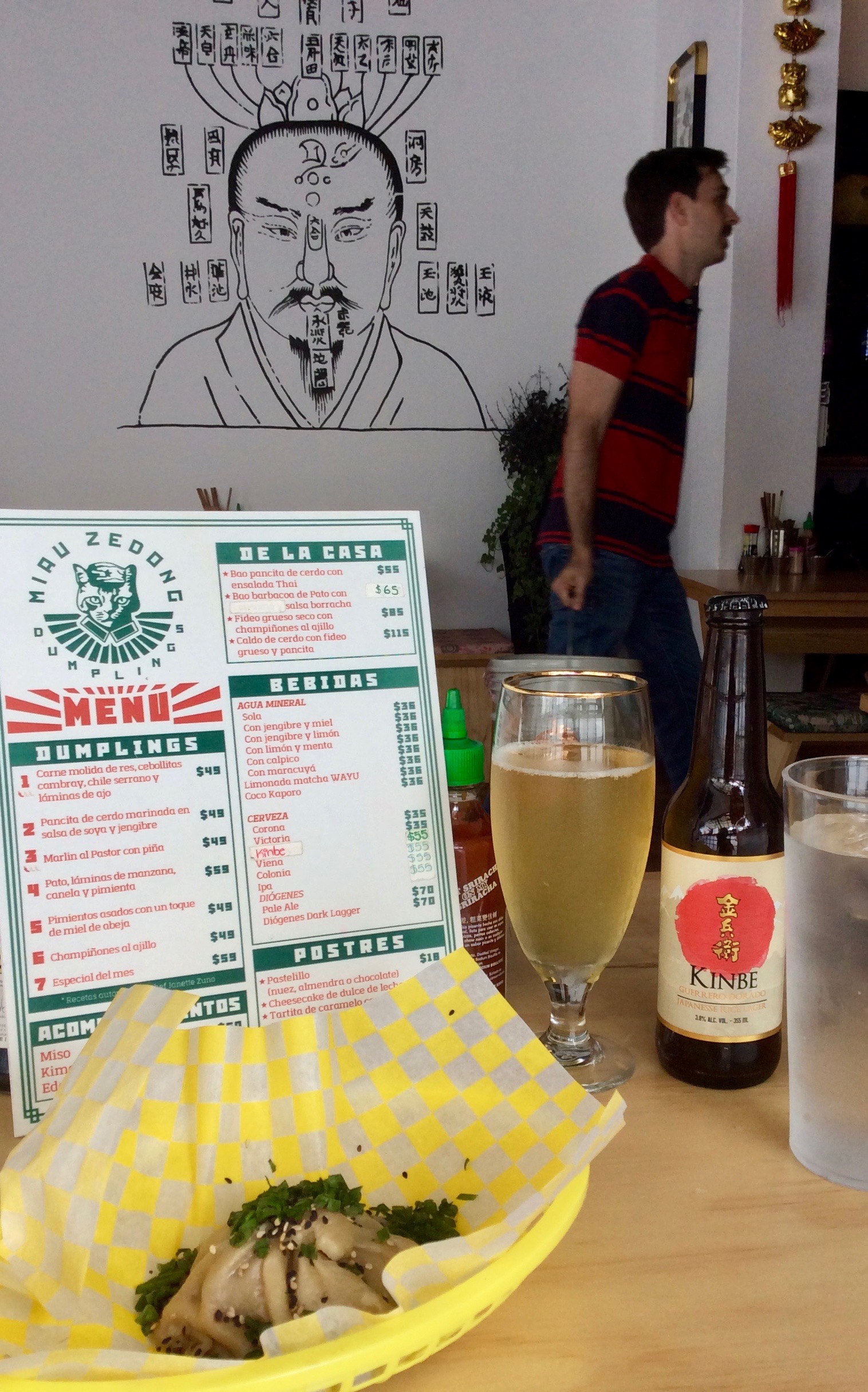 Ridiculous, you say! Okay, I’ll grant you that. But this lively spot – festooned with glowing, red Chinese lanterns and a logo with a cat (“miau” – get it?) in a Mao suit and cap – is located almost next door to the Japan-and-cat-inspired Neko-hi! Cafe de Gatos (see story, June 13), where kitties roam over customers’ feet and curl up in their handbags. So can I convince you that all this represents an Asian invasion of Guadalajara? A cat-craze invasion?

I have another conspiracy theory related to this restaurant. In two months of strolling by Miau Zedong Dumplings, I was dazzled by the aforementioned lights and zippy techno-, rap- and reggae-inspired music it emanates, but I failed to immediately notice the provenance of the name, the play on words, and even the puss-in-uniform logo. And when I did, I remembered the rumor I heard in my tender years – cats are part of Asian cuisine, I was told! Well, the rumor may have been based on fact, at least according to a 2010 CNN report on a dog and cat meat market in Guangzhou, China. (Of course, the story may have been planted by Russian disinformation specialists, although animal activists apparently believed it.) In any case, I wondered, was this restaurant hinting at a clandestine source of its dumpling filling, or just being playful?

Of course, just being playful. At least that is my firm conclusion after enjoying a meal at Miau Zedong Dumplings. Yes, there were offbeat filling ingredients on the menu (duck and marlin, for example, both spiced very nicely, with a touch of piquante and some sweetness—apple with the duck and pineapple with the marlin). But a friendly waitress told me the name is just a play on words, although she did note that some folks looking for Neko-hi! had stumbled into Miau Zedong Dumplings due to its cat logo.

After all the intrigue had been put to rest, I was ready to focus on the reality of this new restaurant. As for its background, waitstaff informed me that the four owners are 100 percent Mexican and haven’t even visited Asia. My guess is they are graduates of the many culinary institutes in the area, and judging by my meal, they have done a great job of creating a fusion of not only Chinese, Japanese, Thai, Korean and perhaps other Asian food, but Mexican too.

The Miau Zedong mothership got its start as a food cart in the fancy Providencia suburb, where it still exists. When it branched out to the current small (10-table) eatery in Colonia Americana (on Avenida La Paz between Chapultepec and Americas), it also grew a slightly bigger menu, adding two types of bao, a bun of homemade dough, filled with a mixture of pork, duck, Thai salad and/or salsa, and steamed in a bamboo basket.

But the original part of the menu starts with a nice selection of nine beers (standard and artisan) and a creative selection of eight non-alcoholic beverages, most using agua mineral as a base and adding the likes of lemon, ginger, maracuya, mint, honey and/or matcha.

The dumplings, of course, are the heart of the menu, and my waiter recommended pancita de cerdo or pato, so I ordered pato (55 pesos) and marlin (45 pesos), one at a time, since I wasn’t sure of the size. I also ordered what they call miso, which is actually miso soup, and a very nice one at that, with fresh mushrooms and large pieces of a variety of seaweed.

The first dumpling came in a flash (in a plastic basket lined with paper), sprinkled with chopped scallions and white and black sesame seeds. Dumplings are probably best eaten right away, but I waited until finishing the miso soup. I ate the marlin dumpling more quickly. It was tender and I had made strides in my dumpling-eating technique, thanks to the waiter’s explanation. By that time, I had also discovered the small bowls of salsa, both sweetish, one orange in color and made with carrots, the other dark brown and equally tasty.

The space is bright and airy and the decor full-throttle Asian – seat cushions covered in Japanese print fabric and whimsical images painted on the wall, suggesting acupuncture, acupressure or Tai Chi – although I suspect you would find nothing like that in Asia (but, instead, restaurants with American or European themes). The decor made me think of a department store in Tokyo that featured crucifixes, complete with images of Jesus hanging on them, as Christmas decoration.

For dessert, I had a tasty and tiny tart or pastellilo with a creamy filling (18 pesos) which seemed to be just the right amount of decadence.