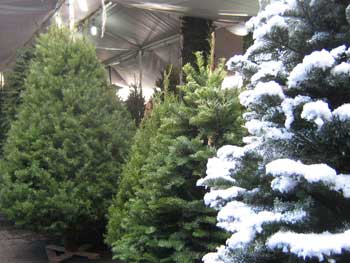 Wal-Mart and Soriana have sold Christmas trees for years now and you could generally find some baubles and tinsel to hang on their shelves, but this year they have gone crazy with the navidad decorations. Hundreds of theme items line dozens of shelves in both stores. Most of it is made in China, but what isn’t nowadays.

Starting with the trees, both stores sell Noble Fir trees shipped down from Canada for prices ranging from 489 for trees four to five feet tall to 789 pesos for trees six to seven feet in height.

Noble Firs are what the locals consider “Japanese” and they supposedly don’t drop their needles even when they dry out.  Douglas Spruce is a better looking specimen to my eye, but buy one at this early date and your tree might have shed the bulk of it’s green before Santa and the Niño de Dios shimmy down the chimney.

And now for the decorative items: to those for whom money is no option, Soriana has a beautiful four-foot fake tree complete with hundreds of lights and some spheres for only 2,999 pesos. At Walmart fake trees started at 999 pesos. More from Wal-Mart: a remote control Christmas train to run around your tree is offered for 749 pesos; a two-foot high smiling animated Mr. And Mrs. Claus will set you back 699; Just want St. Nick? He’s only 379 pesos; 62 three-inch spheres in assorted colors were only 169 pesos. A four-foot inflatable Santa or Frosty the Snow Man were only 349 pesos at Wal-Mart. At Soriana, a lighted acrylic Santa in his sleigh with reindeer which looked a bit like an ice sculpture was 299. Large Poinsettias, both red and white, cost 45 pesos at Wal-Mart but were only 39.90 at Soriana. Stuffed Christmasy themed bears were 199 at Wal-Mart, while a large felt Santa toy bag cost 99 pesos at Soriana. Fancy tree skirts in a variety of colors and options were available at both stores.  It looks like Martha Stewart types have made inroads in the big box Christmas decoration business.

In the kitchen (and even the bathroom) Santa is king. At Soriana: Christmasy aprons (69 pesos), hot mits (39 pesos) glass X-Mas mugs (15 pesos) and a big fat Santa or Frosty cookie jar for only 159 pesos. I didn’t bother to price the Christmas toilet seat covers.

At Wal-Mart ceramic Christmas coffee mugs were 19.90 pesos. And all manner of plates, trays, cutlery, napkins table runners and a million other what-have-you holiday items for the home, were available at both stores.

On a practical level, wrapping paper is now available, but not the huge (we have 10 kids in the family) variety, but more like the (we only give to a couple of friends) rolls at elevated prices.

If you do have kids to buy for, costumes for elves, santa, three kings and other holiday favorites were 149 pesos at Wal-Mart. And candy of all types and flavors begins at only 9.90 for a holiday gift box.

By the X-mas Grinch