On January 21, 400 citizens and expats of La Manzanilla joined the millions of other people around the world in a peaceful protest march against the threat of losing not only women’s rights, but human rights.

Women, men, and children all carried signs declaring that they will not lose ground on the hard won advances in equality, but push ever forward until egalitarianism is achieved.

Jeanne Crosby, a native of Oregon, and retired school teacher worked tirelessly to organize and promote the event.  She obtained permission from the local delegado (town administrator) to conduct the march, organized volunteers to make signs, and crochet the now famous pink “pussy hats.”  She also arranged for transportation for those who had difficulty in walking the route. Her fiery determination stood up against the nay-sayers’ disparaging comments time and time again.

Crosby’s speech focused not only on women’s issues, but of those of our children and grandchildren’s future, and the rights of this planet we all call home.  She stressed that while history was being made this day with the largest, peaceful worldwide protest, the need to maintain the pressure on those who seek to intimidate, terrorize and bully to achieve their aspirations needs to continue 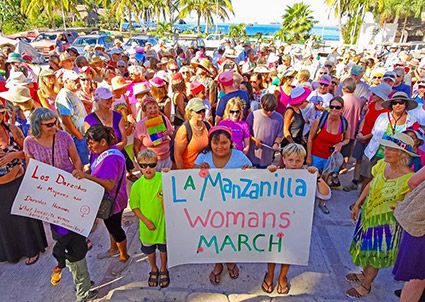 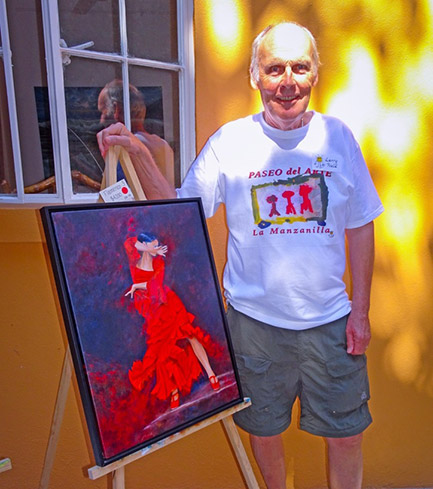 For the past nine years, the last Sunday in January has been marked on calendars in the homes of people from Careyes to Manzanillo.  What is so special about this particular Sunday? Why it is Art Walk Day!  Crowds come early to view, admire and purchase the creations of more than 37 local artists residing here in La Manzanilla. From paintings, sculptures and funky beach art to delicate hand crafted jewelry, there is something to catch everyone’s eye.

The annual Art Walk is made possible to a group of dedicated volunteers who spend months in preparation.  Maps are provided to visitors with the locations of each vendor, and students from the La Catalina Foundation Art Program act as ambassadors, by providing directions and answering questions about their program.

The Ejido Center is filled with the designs and handiworks of these budding Rembrandts.   Each artist and venue sponsor pay a reasonable entry fee, and donation cans are set up in each venue.  Proceeds from the Art Walk go to buy supplies not only for the La Catalina school, but our public schools as well. 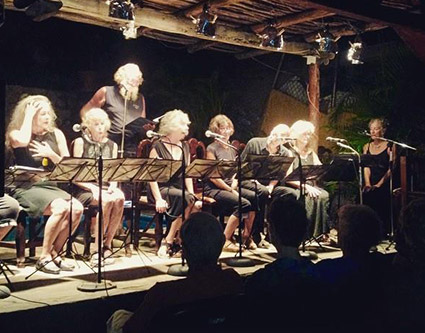 The Authors Group here in town meet every Saturday morning at Martin’s Restaurant to read their latest works of prose and poetry.  The members then critique each other’s labors and offer their thoughts and suggestions.

Each person in this diverse group is dedicated to helping another through bouts of writer’s block, directions of the story and so forth.  They strive to help one another develop and grow in their writing journey.  But they also wanted not only to share their endeavors with the public, but also to give back to this community they call home.

Ron Stock, one of the founding members of this assembly, came up with the idea of the Three-Part Charity Series.  Part One was an Open Mic night, held on January 9 at Casa Luz.  An audience of 30 were treated to the tales of ten different storytellers.  This event was well received and the audience grew to 53 for Part Two of the series which was a Story Slam Contest.  Here again, ten storytellers verbalized their tales while five judges silently, but carefully assessed their compositions.  The winners of this slam completion generously donated their prize money back into the donation fund.  To date, this series has raised 2,350 pesos, which has been divided between three different organizations, school uniforms, children’s art supplies and animal control.