Even though the calendar tells me that it is November and the thermometers are still singing HOT! HOT! HOT!, there are definite hints around the town that summer is officially over.

Rental properties are being spiffed and polished; Lydia and Omar are stocking their shelves with “gringo” food; a few new faces have been spotted and our message board is lit up with ride share requests from the airports, just to name a few.  The influx of “winter people” will be on in full swing in just a couple of weeks.  I believe that they will be pleasantly surprised with the improvements made and with the new and innovative projects still in the planning.  With all the upcoming events they definitely won’t be bored.

Virgin in the Bay

It is no secret that every city and village alike in Mexico has a patron saint, a divine being that blesses and protects all life in the region.  La Manzanilla is no exception, with our saint being the Holy Mother Mary.  Every August 15, our town celebrates her ascension to Heaven with a colourful parade, joyful song and very loud firecrackers. This year however, homage was bestowed upon Our Lady in a very unique ceremony.  It began months before in the artistic psyche of a gifted sculptor by the name of Pino, a long term resident of the pueblo.    Hours turned into days, the days into weeks as he continued to chisel into a solid piece of stone until at last, the Virgin emerged, hands folded in prayer, while her serene face looks up to Heaven.

From Pino’s studio the sculpture was transported to the church in the centre of town.  There she remained for several days.  Many came to kneel in prayer, all came to admire.  On August 14, at the request of the local fishermen and general population of the town, the statue was loaded onto a backhoe and taken to the beach.  Flotation barrels were attached and it was placed on a specially designed raft which carried it out to the rock formation in the corner of our bay. There the statue was released into the sea.

It stands upright approximately 100 yards offshore in about 25 feet of water, there to bless our bay and protect the men who risk all to provide us with the ocean’s bounty.  A special Mass was held the next morning by the Bishop to complete the ceremony. 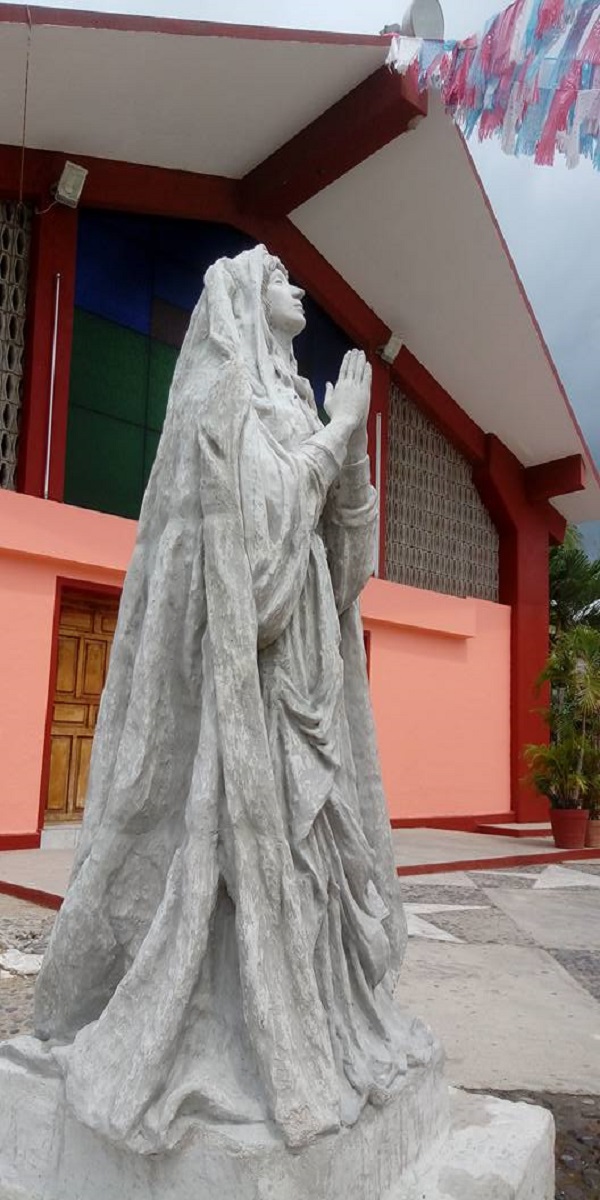 Catch of a Lifetime

Back in March, Jesse Conner, winter resident and avid fisherman, reeled in the catch of his lifetime. When I contacted him to hear his story about the BIG one that didn’t get away he sent me an email describing the experience.  The following is his “fish tale” in his own words.  No one else could tell his story better.

“March 5, 2017 was a very special day for me. I have been an avid salt water fisherman since the age of eight when my father used to take me fishing regularly on party boats out of Southern California. My interest gravitated to the thrill of surface species which fight harder than bottom species and by the age of 12, I knew that my biggest thrill was catching tuna. I am a Tuna Chaser! 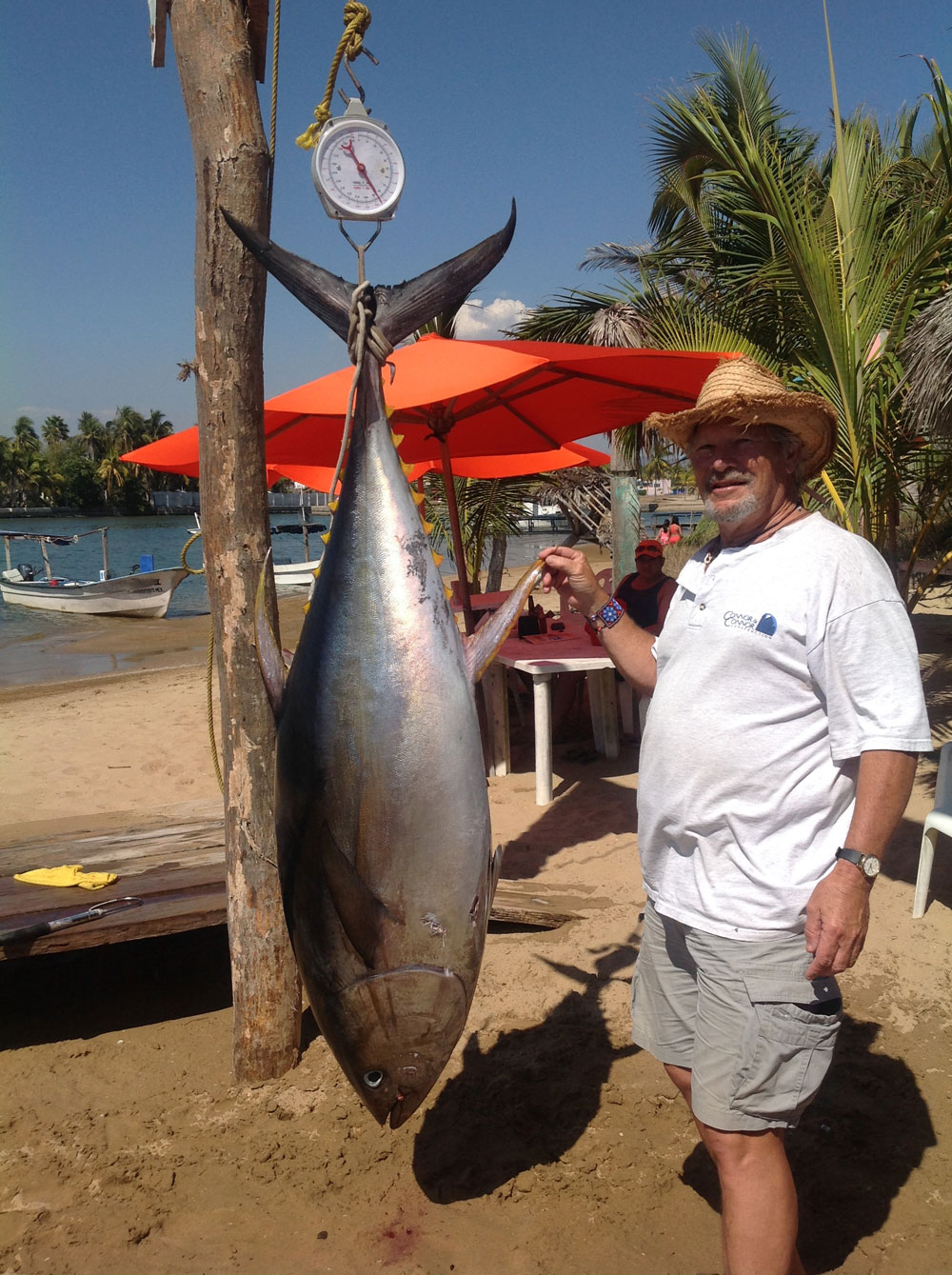 On this Sunday morning, I had contacted my buddy Mike and we met one of the best fishing guides in Barra de Navidad, Alfredo Milamorres, before dawn and headed for the 30-mile line offshore and put our lures out. After half an hour we spotted a few birds working the water along with dolphins and we headed in that direction. It was a remarkably flat day on the ocean and the launch glided smoothly over the water until a huge splash exploded behind the boat and one of the reels went screaming with line peeling out for a couple hundred yards before slowing down. I looked at my watch and it was 10:15 as I settled into the fighting chair and grabbed the pole realizing that the weight and pull on the end of the line was heavier than any tuna that I had felt before. The captain put a fighting harness around my back and clipped into the reel, thus transferring the weight to my torso instead of my arms, which would be needed to pump the rod and reel in the fish. I started the process of pulling the fish in and I made headway steadily until the fish neared the boat and upon seeing it proceeded to run again and reclaim all the line I had gained … So I started the pumping action again and the fish came to the boat again with much more difficulty. Once again, upon seeing the boat he ran and re-claimed all the line I had gained. This process went on two more times. As I was retrieving the line, I took a few minutes to process what a special time I was in and thought about Ernest Hemingway and his love of big fish angling. I now knew of what he described when writing “The Old Man and the Sea,” and I knew that I probably wouldn’t get this lucky again. I was worried that after this big fish had been fighting me for so long the hook would become loose and come out before I got him in. I’m nearly 70 years old and I knew that my strength would give out at some time so I wanted him in. After an hour and a half, I had worn a blister on my thumb that opened up and caused me aggravating pain every time I turned the reel handle, and sure enough I was tired. I gave it all I had and got the tuna beside the boat where the captain and deckhand Oscar gaffed the tuna in two locations and I stepped back with the rod to make room for them. As I watched them trying to pull the tuna into the boat I saw that they couldn’t pull it over the gunnel so I put my arm around Alfredo’s chest and used my weight to pull Alfredo, Oscar, myself and the tuna into the boat all together with a great thud. We looked and marveled at the size (192 pounds) and high fived, hugged, and thanked God. During all of this, the other guides in the same area had also hooked into large tuna but had lost them, so they were on the radio encouraging us to land ours and quite interested when we landed the tuna at noon sharp (an hour and three quarters). It was time to return to port, so we did, and as we returned the other guides were there to see this big fish get weighed and celebrate with us.

We butchered the tuna and I took half and gave the other half to the captain and his friends. We returned to La Manzanilla and threw an all-you-can-eat sushi and sashimi party for our friends which could not be beat. We took a moment to honor this great fish and thank him for providing us with the joy and food. Never to be forgotten.”